Home > News > The history of the Defoe Cruisemaster series 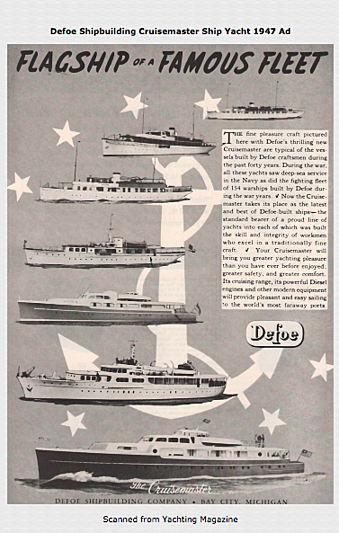 Defoe started production in 1905 and built a large number of yachts around 30 units greater than 30 metres, plus many commercial vessels and naval craft, such as sub chasers, patrol craft, landing craft, and even three destroyers for the Australian Navy. The yard eventually closed in 1976.

The Defoe Cruisemaster series of motor yachts were completed during the period of 1947 to 1948 and comprised of six large (for that time) motor yachts. Basic details of the series were a length overall of 36 metres x 5.64 metres breadth x 1.83 metres draught. Hull and superstructure were made from steel. Engines were General Motors 6 cyl. diesel engines - 4 x 200 hp each, placed in tandem. Maximum speed was 15 knots and cruising at 11 knots. These yachts normally carried eight guests with six or seven crew.

Now let's look at each of these six yachts in detail. First to be delivered was Chanticleer, hull number 404, built for John C. Pace in 1947. The yacht was based in Pensacola, Florida until it was sold a few years later to the Miami-based Cuban, Sr. Aleman. He was a Cuban presidential candidate and planned to return to Cuba by sea on the yacht if he won.

Well, he didn’t win as you’ve probably guessed, and Chanticleer once again changed hands, this time to a Mr Carpenter, who only kept the yacht for a short period before parting with her. She was then taken over by Ralph Evinrude of Outboard Motor Fame. He married Frances Langford, the Hollywood actress, and they invariably spent some time cruising on Chanticleer on the US coasts until Evinrude died in 1986. Frances Langford would later acquire another Chanticleer, a 33.5-metre Burger - but that’s another story.

The next owner of the Defoe Chanticleer was Samuel DuPont of the prominent American DuPont family who renamed the yacht Enchantress. The yacht then passed to Jack W. Morey without change of name, and finally, the yacht changed hands again and was renamed Sabor-A-Mi in the 2000s. She is still believed to be in existence. 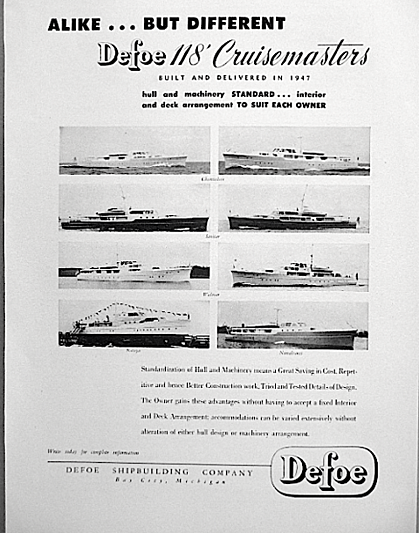 Hull number 405 Walmar was also delivered in 1947 to the Walmar Corporation in the United States. The yacht then appeared in Cannes as Joseph Conrad in the 1950s. The next owner was the American John H. Macmillan of the Cargill grain business. He renamed the yacht Carmac II in the mid-1950s following the sale of the first Carmac in 1953.

An equally well-known US owner, Ogden Phipps acquired the yacht in the late 1960s or early 1970s and changed the name to Vergemere. There was one final change when the yacht became Golden Fleece in the late 1970s. The yacht was last reportedly seen in 1981.

The third yacht of the series Natoya hull number 406 was delivered to the American Harold DuCharme of Grosse Pointe, Michigan in 1947. The yacht made an appearance in the James Bond film Thunderball in 1965 when she was briefly renamed Disco Volante. Shown at a distance at anchor, she was a stand-in for the film’s main yacht that was built in two halves. 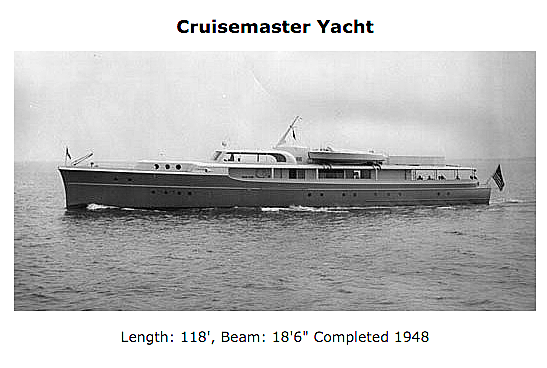 By 1972, the yacht had changed hands for the first time, and her new owner was Fred J. Sperapani of Washington DC. He kept the name Natoya until the yacht was acquired by Robert Green in 1979 and renamed Jacqueline B. He kept her until 1981. The yacht re-emerges in 1989 when she was converted to a commercial fishing and diving vessel and renamed Our House III. Her later history is unknown.

Now, on to hull number 407 Savitar that was delivered to American Phil Berg in 1947. He owned the yacht until 1951 before selling her to the Henney Motor Company. The new owners kept the same name under their stewardship until selling the yacht to Canadian John D. Eaton in 1955. He renamed the yacht Hildur and then Maia II. 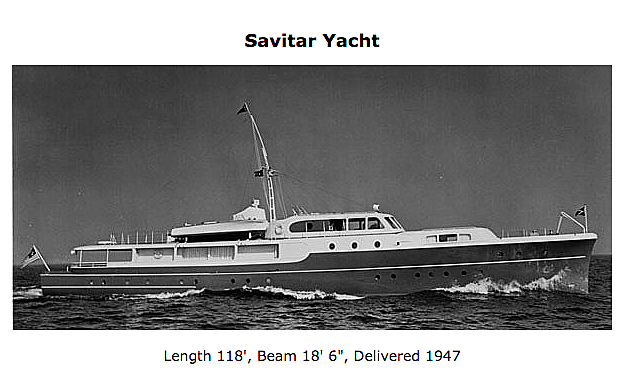 In 1961 the yacht was acquired by Harvey S. Hewitt and renamed Patrician. He retained ownership until 1965. Subsequent owners were: Harry Lafontaine from 1965 to 1968, who renamed her Fleur-de-Lis II, Louis D. Root from 1968 to 1973 who renamed her Camelot, and finally to Joan Fiske of South Africa from 1973 to 1975, who reverted to Patrician. She has not been reported as a yacht since 1975.

Little is known of hull number 408 Nunalvares delivered again in 1947 to Jose Lopes of Brazil, who ran the company Perfumaria Lopes S.A. It is unknown how long this yacht remained in service.

The last yacht in the series hull number 414 Cruisemaster was completed in 1948 but retained by her builder Harry J. Defoe pending her eventual sale in 1953 to the West Indies Fruit and Steamship Company, who operated the yacht under the name Elda. The next owner was the American politician Spiro Agnew who renamed her Sea Level prior to acquisition by the State of Maryland, which renamed her Governor Tawes and later Maryland Lady. Other owners were John Dale Showell III and Brett Lurie, both retaining the same name. The yacht was still in existence in August 2007 when she paid a visit to Antibes.

Research is still ongoing to fill in any gaps in the history of this unique series.