The sound of trumpets filled the yard as Koninklijke De Vries Scheepsbouw launched the 55.05m (180’7”) Feadship Kahalani on Saturday 16 January 2010. Her delighted owner had flown in members of the Light Infantry Buglers to serve as a guard of honor and add extra gravitas to the name giving ceremony. 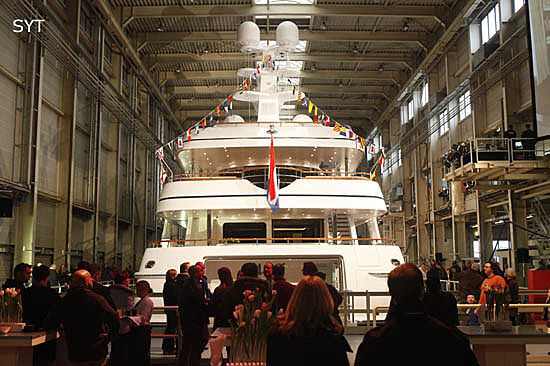 They joined guests from around the world and hundreds of personnel from the De Vries, De Voogt Naval Architects and co-maker companies in celebrating the completion of a timeless Feadship with an ornate modern interior.

Kahalani is the first brand-new Feadship for a client who had previously owned the 43-meter Feadship launched as Sea Sedan in 1993 and renamed Kahalani (which means ‘heavenly waters’). While being happy with how this first yacht had served his family and friends, the owner wanted to create a larger version within a distinctive exterior design template.

The creatives at De Voogt have responded to this challenge with a range of styling elements such as the rounded shapes of the dodgers, the recessed and elegantly proportioned window mullions, teak cap rails that runs over all decks, beautiful stainless steel details, and the use of pronounced dark grey lines along the superstructure. All these attributes are seamlessly blended with classic Feadship features such as the raised bow and dashing flair.

Another signature aspect of the Kahalani project was the extraordinarily sophisticated design and décor created by Rémi Tessier, who by his own admission is ‘an audacious and eclectic creator who is always on the move’. Hard wooden floors predominate throughout Kahalani‘s interior of wax-finished Makassar ebony with sycamore inlays, which also features a wealth of custom-built loose furniture, light fixtures, and special wall finishes.

Having initially expected not to be very involved in the build itself, the owner found working with both Tessier and the De Vries craftsmen to be such a pleasure that he visited the yard on many occasions. His enjoyment was reflected in an enthusiastic speech at the launch in which he described Feadship as “a dream factory, producing work of an unbelievably high quality for some of the most demanding customers in the world. Your experienced craftsmen and technicians are skilled to an exceptional degree. Their caring and professional attitude is seen in every single element of Kahalani, which is built to the highest possible construction, engineering and safety standards.”

The owner went on to explain how prior to signing the contact for Kahalani he had visited shipyards in Turkey, Italy, Australia, Germany, the United States and elsewhere in the Netherlands. “I made the right decision and it is obvious to see why the skills and attention to detail that Feadship offers are the envy of shipbuilders worldwide. For anyone who appreciates fine craftsmanship and has a truly great passion for quality, this is without doubt the best place on the planet to have a yacht built. Thank you for translating my dream into reality.”