“The Australian yacht market is very buoyant at present due to the strong Australian dollar,” said Roberts. “Being market leaders, DYT and Aurora are working hard to service the South Pacific market for yacht transportation in relation to this large influx of yacht movements.” 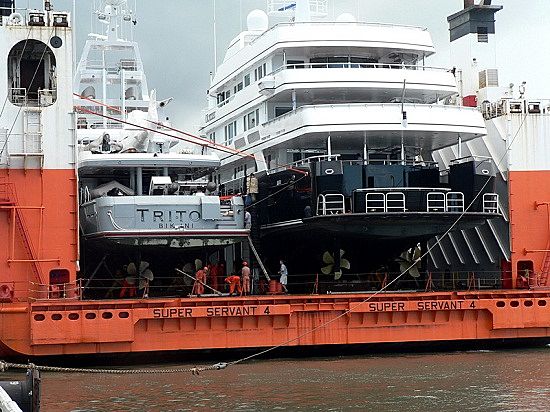 Super Servant 3, at 456 feet (139 meters) in length and operating on a regular schedule to deliver yachts around the world, will look something like a giant moving marina when it comes to town. By “sinking” its dock bay, it will safely float off its cargo of yachts. Captains, owners and crew will be aboard the vessels during disembarkment, ready to take them by their own power on to new adventures.

"It’s an amazing process,” said Roberts, “and no other shipping company has this ability to deliver boats in such a manner.” Nevertheless, Roberts says DYT often orchestrates lift-on/lift-off arrangements with third-party carriers for clients wanting a more flexible shipping schedule or to explore destinations where the float-on/float-off ships aren’t scheduled to go.

“With both services combined, we have created a very strong DYT yacht logistics product that is being utilized by many yacht owners and manufacturers and continues to be a leader in the market,” said Roberts.

Super Servant 3 departed Port Everglades in early December, 2010, and will have made stops in St. Thomas (USVI), Golfito (Costa Rica) and Papeete (French Polynesia) before arriving in Brisbane. From Brisbane, it will head to Auckland and return to Port Everglades (Ft. Lauderdale, Fla.) in late February, via Ensenada (Mexico).

DYT’s second “float-on/float-off” voyage to the South Pacific this year will begin in Port Everglades in early July, with stops in Golfito (early/mid July), Brisbane (early August), Auckland (mid August), and head back via Ensenada (mid September) to Port Everglades (early October) in time for the Fort Lauderdale International Boat Show. This particular voyage is ideal for those who want to attend the Rugby World Cup which takes place in Wellington, New Zealand, in August, 2011.