The 145-foot (44m) water-jet motor yacht launched in 1990 by Dutch builder Heesen Yachts as L’Aquasition has enjoyed a high-profile career; subsequent incarnations included the popular charter yacht Artful Dodger and Lady Joy. Today, an extensive refit at Derecktor Florida has transformed the yacht – re-christened At Last – into a virtually new custom project built to her new U.S. owners’ specifications. Praising Derecktor’s expertise and flexibility, the owner said, “Anything we wanted, they could do.” 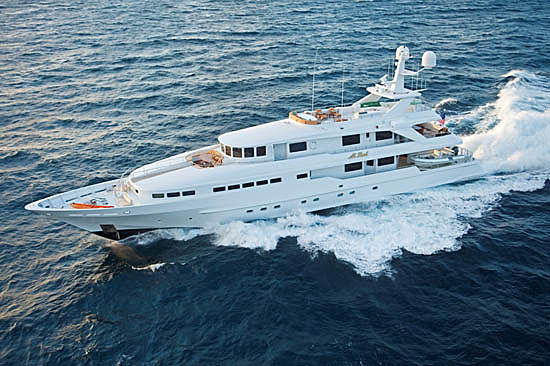 “The At Last refit project allowed us to demonstrate Derecktor’s capabilities in design, engineering and construction,” said Derecktor Shipyards CEO Paul Derecktor. The company currently is putting those skills to good use in the construction of the 281-foot Cakewalk, the largest yacht to be built in the U.S. for three-quarters of a century.

Following a successful summer of cruising in The Bahamas with the owners aboard, the newly refit At Last will be on display at the Fort Lauderdale International Boat Show, October 29 – November 2, 2009.

Viewed from the water, At Last now displays a dramatically different profile, due to Derecktor’s major reconstruction of her wheelhouse, which required cutting away the yacht’s formerly raked aluminum superstructure, raising the roof and installing vertical windows. The result is a command center that offers the captain a vastly improved view of the waters around the boat, as well as a comfortable observation space for the owners. 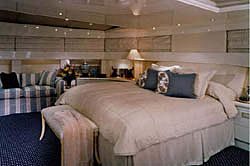 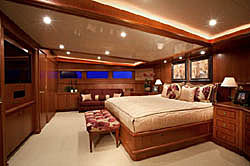 Designer Claudette Bonville of Claudette Bonville & Associates consulted on the At Last’s interior refit, which required gutting large portions of the yacht and taking them back to the aluminum framing. Her classic interior design for At Last replaced the white lacquered walls from the Lady Joy era with warm anigré woodwork with maple and walnut accents.

The space planning was reworked to provide a more fluid traffic pattern for the owners, guests and crew. Originally, the entry to the main-deck master stateroom led directly off the dining salon. Derecktor Florida’s craftsmen built an entirely new side corridor for the suite and consolidated the former his-and-her baths into a dramatic, unified master bath.

Another major renovation required disguising the stainless steel support beams for the yacht’s central spiral staircase with “faux bois” columns and replacing its adjoining semicircular skylights with solid metal flooring. The Heesen’s skylounge lacked a day head; an innovative half bath was created in the space formerly occupied by the upper skylight.

On the lower deck, the yacht’s fitness room was gutted and transformed into an enviable VIP stateroom with king berth. Her three other staterooms received a total refurbishment, and a Pullman berth was added to increase her capacity to sleep 11 guests. 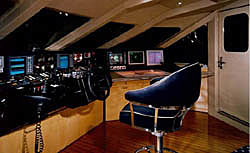 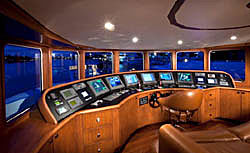 At Last’s systems, instruments and equipment were all upgraded. She now features a Media Center entertainment system, NightWatch ship’s monitoring system and Atlas universal shore power converter. Her KaMeWa water jet drivers were refurbished and her main engines replaced with twin MTU 12V 4000 diesels. Top speed is now 18 to 20 knots and cruise speed is 16 knots, making it possible to visit more destinations within a week’s itinerary. The yacht’s shallow draft, which is only 5'7" (1.7m) thanks to the water-jet installation, also makes more destinations accessible.

“Since taking delivery in early June, we have cruised At Last repeatedly through the Abacos and Exumas, encountering anchorages we would have not thought possible in a yacht of this size,” the owner said. “It has been an endless summer of activities with family and friends that has left us with a lifetime of incredible memories.”

At Last is offered for charter through International Yacht Collection (IYC). She will be available on an exclusive basis in The Bahamas and Caribbean this winter. Her charter rate starts at U.S. $150,000 per week, plus expenses. IYC also is offering At Last for sale at a price of U.S. $19.9 million.