The iconic 150' Feadship superyacht The Highlander, built by de Vries in 1986 for legendary Malcolm Forbes, was long seen as one of the best-known symbols of big business, plying the east coast of the USA as a corporate yacht for Forbes magazine. Recently purchased by new owners, the vessel has recently undergone a major refit at Derecktor Florida and was finally launched on January 2nd. 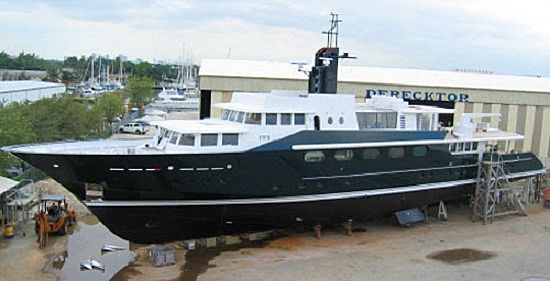 Lengthened by Derecktor to 164' LOA with a stern extension that incorporates an Opacmare Transformer, and respendent in the same dark green paint for which she has always been known, the vessel's profile has, however, been softened with some deft touches by the owners and their design team.The result is a stunning melding of the original Bannenburg lines with more contemporary features that look both classic and modern at the same time.

Derecktor replaced a significant amount of shell plating while extending the hull, and also installed Quantum zero-speed stabilizers. The paintwork was performed by Alpha One Yacht Refinishing.

"This project has been a great collaboration between the owners, their design team and the shipyard," said the yard's project manager Jack Schneider. "It is very rewarding to see an older vessel of historical significance restored to her former glory".

More photos and renderings can be found in this article.