Following the unveiling of the designs for The Belafonte, a 50 metre superyacht concept from designer Federico Fiorentino, towards the end of 2014, the Milan-based design studio has today announced a collaboration with Van Oossanen Naval Architects. 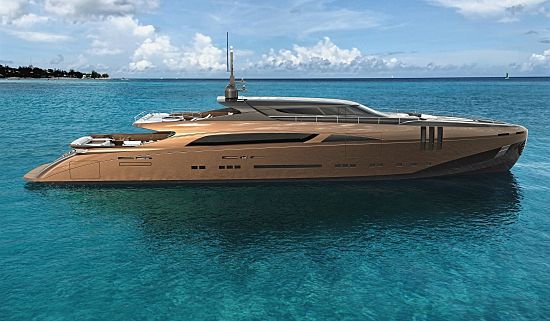 The Belafonte will offer performance improvements of up to 30 per cent in displacement speed ranges and up to 20 per cent in semi-displacement speed ranges, boasting top speeds of up to 30 knots. Due to her patented Fast Displacement Hull Form, she will also be able to offer significant fuel savings at lower speeds, turning the new vessel into a transatlantic yacht at 13 knots, and pushing it beyond the transpacific barrier at 9 knots.

Commenting on the collaboration with Van Oossanen Naval Architects, Fiorentino comments, “As the yacht was perfectly suited to being coupled with the revolutionary Fast Displacement Hull Form (FDHF), Mr Perry van Oossanen invested time and resources in a preliminary study on The Belafonte. This in turn officially paved the way for collaboration.”

He continues, “This is a significant step forward for The Belafonte project and for what may be the first of other future collaborations between Van Oossanen Naval Architecture and Federico Fiorentino design firm.”