SuperYachtTimes were at FLIBS 2012 for a 5th consecutive year which has become an extremely important fixture in the SYT calendar of events. Despite the edge of Hurricane Sandy disrupting the Thursday evening of the Show, it served as another successful opportunity to meet with the Superyacht Industry's US market, whilst also ensuring the SYT team remain on top of all the intelligence issues surrounding the European market too; Shipyard, Brokerage, Charter and Design news in particular.

The 53rd annual Fort Lauderdale International Boat Show wrapped up on a high note with sunshine and pleasant temperatures following inclement weather the first two days of the five-day event. Despite the weather, exhibitors reported serious buyers, qualified leads and closed deals during the first two days, while the weekend attracted near record-breaking attendance.

"After being down 30 percent during the first two days because of Hurricane Sandy, attendance was very strong the last three days and finished down just 2 percent over last year for the show overall," said Efrem "Skip" Zimbalist III, CEO of Show Management, the company that manages and produces the show. "The number of boats in the water was up 10 percent, with new boats up 14 percent and brokerage up 4 percent. Boats under 80 feet were particularly strong, up 13 percent over 2011, as were brokerage boats over 126 feet, which were 15 percent ahead of last year." 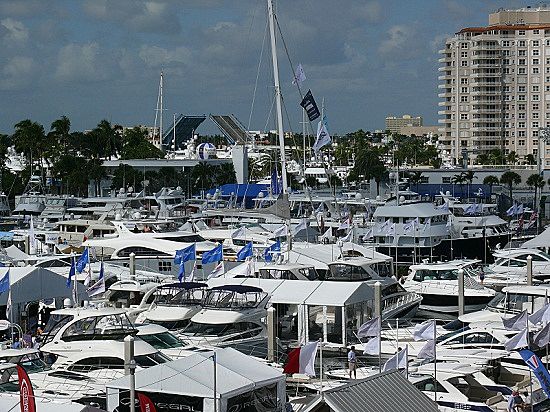 SYT's Richard Callender commented: "The informal atmosphere of the Fort Lauderdale show also provides a great opportunity to embrace the American culture, particularly at this time of year with Halloween on the agenda, and also plenty of social events and parties throughout the week including the ever-spectacular Lurssen party."

Please check and like our Facebook page for more photos from the Fort Lauderdale International Boat Show.