Given their experience and resources in building yachts at the top of the size range for bespoke construction, Devonport is extremely pleased and excited to present details of a wonderful new 108m yacht design referred to as the Devonport One Ten, in collaboration with Redman Whiteley Dixon, who have provided the full design styling.

The design is fully Solas compliant under Passenger Ship regulations, has helicopter landing capability and by utilizing a number of already proven systems is intended to be an unencumbered build. The design package could conceivably be constructed by Devonport and handed over to a client by as early as 2011.

Redman Whiteley Dixon have interpreted the design brief, initially, with a Middle Eastern client in mind. Devonport are keen to stress, however, the project could be adapted in equal measure to encapsulate the needs and preferences of any kind of owner, worldwide.

The focus on the interior, for example, is for relatively large areas of air-conditioned space enclosed within the superstructure. Furthermore, there are clearly defined and segregated accommodation areas for male and female staff.

The design of the yacht also includes a traditional ‘Hamaan’ (Turkish Bath) on the lower deck, which itself could easily be changed to a more European style sauna, for example.

The ‘stepped’ hull is moderate in design with fairly traditional bow and stern profiles. On top of which a balanced and flowing superstructure with decks almost inter-connected to each other by the visually appealing use of overhead ‘flying’ buttresses. The eye is gently drawn towards the centre top section of the yacht, where a swooping reverse structure, combined with the vertical top mast, adds a stylish and finishing touch.

Guests enter the yacht either via quayside entrances, or via a water entrance located on the starboard side of the lower deck, leading to a large reception area, guest lift and feature staircase.

Rising up through the yacht to the main deck, feature corridors lead to 10 x fully fitted guest suites in the forward section and a large saloon/lounge area in the aft section.

From here doors lead outside to a large swimming pool, surrounded by plenty of information seating and sunbathing areas. 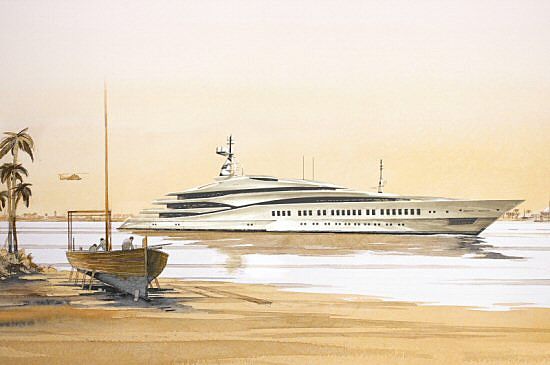 The owner’s deck is situated above the main deck and is intended as a very private and family orientated area; in fact privacy screens can be extended to seal this area off entirely, if so desired. This deck comprises an extremely spacious owner’s suite with twin bathrooms and twin dressing rooms. In addition an office, gym, sauna, private dining room and accommodation for an owner’s closest staff, such as a butler and personal assistant, are situated close by. Lastly, two prestigious VIP suites and a family saloon take up the internal space in the aft section of this deck.

Situated aft on the bridge deck, with panoramic views from its lofty position, there is a formal dining room able to accommodate up to 33 people, housing an imposing U-shaped ‘centre-piece’ dining table. A large banqueting pantry, china and glass stores and food hoist are situated close by to aid serving and clearing away. Finally the captain’s cabin and senior crew accommodation can be found immediately behind the bridge station.

The sun deck provides access to a fully equipped helicopter landing and re-fuelling area. In addition there is an external plunge pool, informal seating and plenty of private, enclosed sun-bathing areas to be enjoyed.