The Perini Navi Group is pleased to announce that Dirk Johnson has joined the team at Perini Navi USA. Johnson will promote Picchiotti brand motor yachts and will be based in the new Perini Navi USA offices, which have recently moved to 2 Marina Plaza, Goat Island, Newport, RI- the capital city of US sailing. 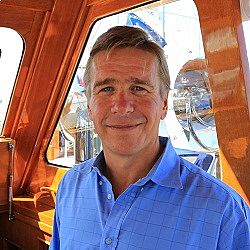 Dirk Johnson, 1960 earned his BS degree from the New York Maritime College. Over the years he has acquired a vast amount of experience in the maritime world, serving as a deck officer aboard tankers, freighters and tugboats in the US Merchant Marine ( he held a 1600 ton Captain License) and establishing a successful career as a yacht broker with houses such as Bartram and Brakenhoff, Little Harbor Yacht Brokers, Churchill Yacht Partners and Merle Wood & Associates.

Dirk has sailed around the world and has competed as Navigator in many important international regattas such as the Rolex Fastnet Race, the Sidney Hobart Race and the Rolex Transatlantic Race.

In 2002 he won the St David Light trophy in the Newport-Bermuda Race. He has often crewed as Navigator aboard Perini Navi yachts such as Parsifal III, Andromeda la Dea, Antara and Freedom during the Perini Navi Cup and the St. Barth’s and the Newport Bucket Regattas.