“Critics sometimes look negatively upon the industry and beautiful superyacht vessels because of its excessive nature and impact on the environment,” explains DLBA, the marine engineering and naval architecture firm set on developing safe, comfortable and efficient vessels with a reduced footprint. Founded in 1988 by pioneer naval architect Donald L. Blount, DLBA has helped to advance the marine industry. Their work on Destriero revolutionised the performance capabilities for high-performance monohull vessels, so much so that the U.S. Navy used a derivative of its hull form and propulsion system in the development of the U.S.S. Freedom. The DLBA naval architecture designs for the 41.5-metre Foners (ex: Fortuna built by Spanish shipyard Izar) contributed to her becoming one of the fastest yachts in the world.

Photo: Conceptual design provided by SDGToday, over marine engineers, designers, thinkers and doers at DLBA are dedicated to creating solutions to move the industry forward through the application of science, technology “and a little bit of art.” One of their latest attempts is the 7Oceans concept - a 45-metre explorer superyacht built using DLBA’s specially developed hybrid hull forms. 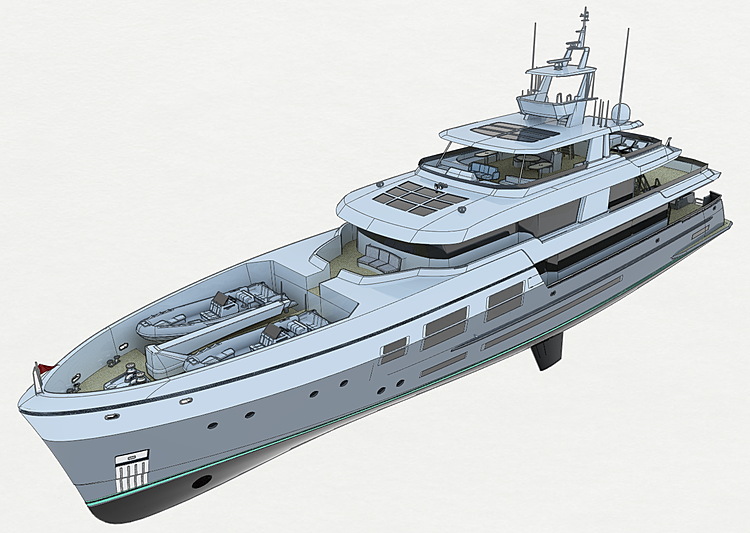 Photo: Conceptual design provided by SDGThe initial stages of 7Oceans started with DLBA developing three discrete hull forms as a result of the technical planning stages back in 2010 after an existing client wanted to push the boundaries of displacement speed. The concept progressed once the team found that the best hull form is based on a high speed round bilge hull form with prominent longitudinal spray rails. After years of experimental research with high-speed craft in a series of model tests conducted at SSPA in Sweden, the result is one that successfully reduces resistance, power and fuel consumption across a wide speed range relative to traditional semi-displacement hull forms.

Photo: Conceptual design provided by SDGWhen cruising between 10 and 15 knots, the resistance of the DLBA hybrid hull was found to be within 8% of an optimised round bilge hull form, while still providing dynamic stability, whereas the resistance of a normal semi-displacement hull can be as much as 20% higher. With installed power from twin MTU 16V2000 engines, the DLBA hybrid hull can exceed hull speed to safely achieve speeds in the region of 25-35 knots, depending on length and displacement. The 45-metre 7Oceans can achieve 30 knots at full load and has an economical cruise speed of 17 knots to make the most of the 30,000 litres of fuel capacity. The overall beam of 8.5 meters gives an expansive interior in comparison to semi-displacement yachts in this range and exceeds that offered by other fast-displacement hull forms.

Photo: Conceptual design provided by SDGThe 7Oceans concept is for owners and guests who are seeking a platform that works efficiently at displacement speeds and is still capable of attaining a high sprint speed to move quickly when it matters most. “If cruising in remote waters and a pod of whales are spotted in the distance, we want our clients to be able to manoeuvre quickly enough to catch up to them - which is all part of the superyacht experience,” comments Jeffrey Bowles, Director of DLBA.

Photo: Conceptual design provided by SDGTaking the initiative one step further, DLBA has fitted the vessel with a diesel-electric-hybrid propulsion system to reduce fuel consumption and catered to EPA Tier 4 regulations for minimum emissions and unrestricted access to protected areas. Fuel consumption and exhaust emissions are elements of the vessel which are not always in the control of the passengers, as it is largely influenced by the design of the vessel itself. “A superyacht’s lifetime can span several decades, and over that time the fuel they consume and the emissions they create can be substantive. As good stewards for our planet, it is our responsibility to tread lightly. Selecting the right hull form initially may be one of the easiest and most effective ways to reduce a superyacht’s footprint,” Bowles explains. 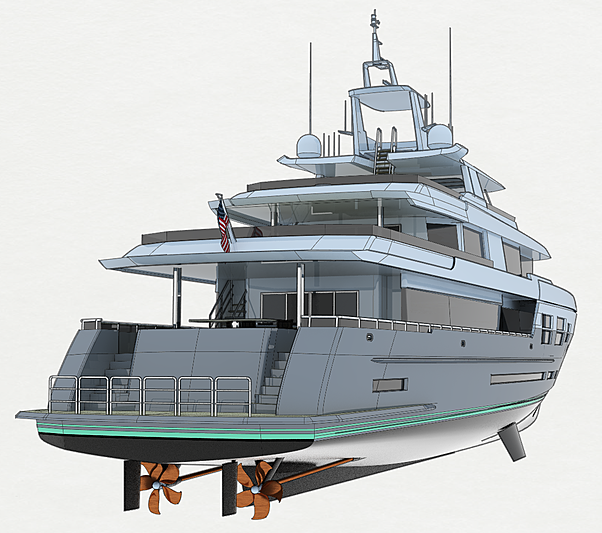 Photo: Conceptual design provided by SDGTo find out more about the 7Oceans concept or any other of DLBA’s projects, visit the company website or contact the team directly via the details found below. 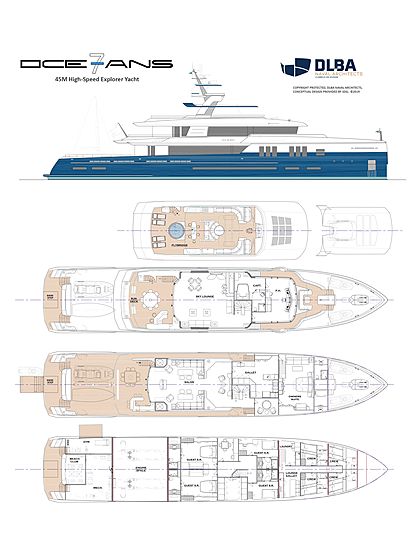