DMS Holland were recently awarded the Maritime Innovation Award 2014 for their AntiRoll stabilisation system, an advanced system providing maritime stabilisation with ultimate balance both cruising and at zero-speed. 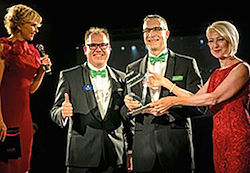 The award is presented to products that have developed an innovation for the marine or offshore supply industry and has proven to have achieved innovative developments within the maritime sector. In addition, the system has also been nominated for the 2014 edition of the prestigious DAME Awards, which will be hosted at this years METS in Amsterdam next week.

The success of these achievements from DMS Holland is even more impressive when considering the company was established just two years ago. The winners of the DAME Award will be announced on the 18th November at METS, and DMS Holland have organised a breakfast meeting for press on the 19th November, where the AntiRoll System will be presented.