Following extensive engineering and a period of comprehensive testing, DMS Holland has recently launched RotorSwing Zero Speed to the market. This system not only dampens rolling whilst sailing but also whilst the yacht is stationary or at anchor.

Instead of traditional fins, the RotorSwing roll damping system uses rapidly rotating cylinders. Whilst the yacht is sailing, these cylinders generate an upward or downward force, depending on the direction of rotation. In order to dampen rolling, the rotors make a "swinging” motion from front to back under the ship in addition to rotating around their axis.

“To test the Zero Speed (ZS) capacity of the system with 2 rotors, we performed ‘forced roll’ motion on our 15 metre demonstration yacht Tessera. The results were amazing and far exceeded expectations. The angle readings on the inclinometer showed spectacular values", says Theo Sale, owner of RotorSwing Marine. 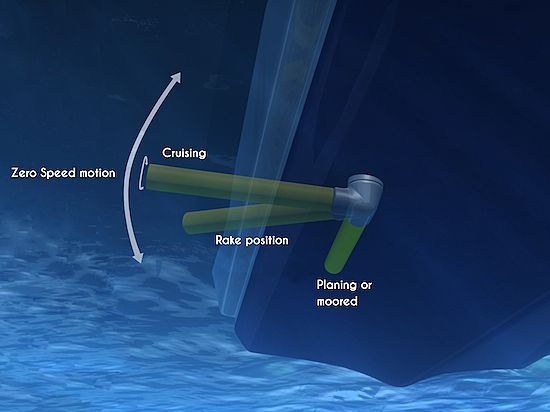 RotorSwing Zero Speed can also be supplied with a "rake" function whereby the rotors can be set at an angle of 45 ° while sailing. This enables planing vessels to benefit from an optimal roll reduction at speeds up to 18 knots. At higher speeds, the rotors are retracted back against the hull to minimise resistance. The ability to retract “against” the hull is also particularly interesting for so-called "IceClass" vessels.

Three RotorSwing Zero Speed systems have already been sold. The first system will be installed this summer on a 27 metre classic yacht in Turkey. The other two systems will also be equipped with the ‘rake’ function and will be delivered to Wim van der Valk Continental Yachts for two new 23 metre aluminium fast sailing yachts. Of these two yachts, the first is scheduled for delivery at the end of 2014 and will be based in the South of France. The second will be completed in the summer of 2015 and it’s home port will be in Greece.

This new addition to their product range is a huge step forward for DMS Holland, the only agent for RotorSwing Marine in Europe!