According to the Chinese Traditional Calendar, May 24, 2007, was "Huang Dao Ji Ri," an auspicious date that brought luck to anything new. On this date, Dockwise Yacht Transport (DYT), the world's only float-on/float-off yacht transport service, christened its newest ship, the 687.5-foot (209 meter) Yacht Express at the Yantai Raffles Shipyard, located at Yantai, Province of Shandong in China. 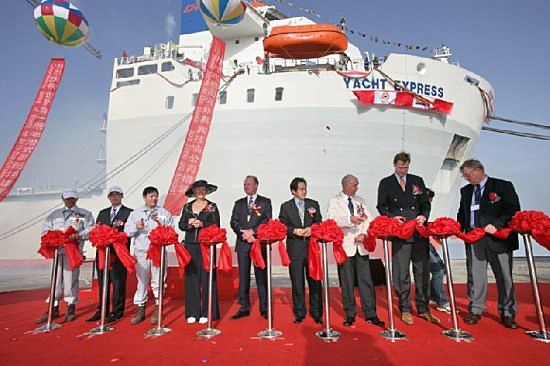 The largest vessel of its kind in the world, Yacht Express was purpose-built with a semi-submersible dock bay that allows yachts of any size to be safely floated on and off as cargo. The process is unique to DYT, which also operates four other semi-submersible yacht carriers. Dockwise Yacht Transport, based in Fort Lauderdale, Fla., is a group company of Dockwise Transport B.V., which is located in Breda, The Netherlands, and considered the global leader in maritime transports of extremely large and heavy cargoes.

"Following the growth of the yachting industry and the still rising demand of intercontinental transportation of yachts, Dockwise has decided to invest in this type of vessel to further enhance the growing business of Dockwise Yacht Transport," said André Goedée, CEO of Dockwise Transport N.V.

DYT President and CEO Clemens van der Werf explained that since its maiden voyage in 1987, DYT has transported over 8,000 motor and sailing yachts to various destinations around the globe, offering yacht owners safe and easy access to many of the world’s premier cruising grounds. 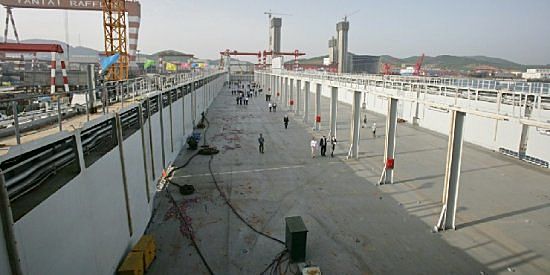 Yantai Raffles Shipyard began construction of the super ship in 2005. "Yacht Express is more than 130 feet longer than our largest carrier,” said van der Werf. “It marks a major milestone in the development of the yacht transport industry, as it will not only accommodate more yachts on regularly scheduled trips to and from Florida and the Mediterranean but also it will deliver them faster." With a service speed of 18 knots, Yacht Express is expected to reduce the time of a transatlantic voyage by nearly 50%, from 15 to 8 days. The ship also will feature amenities such as complimentary cabins for ride-aboard crew; an atrium with swimming pool; restaurant; cinema; and conference, media and fitness facilities.

DYT has partnered with the International SeaKeepers Society to outfit the new ship with the modular SeaKeeper 1000TM ocean and meteorological monitoring system. The SeaKeeper 1000 is a fully automated unit that samples, measures, records and transmits critical measures of ocean health--salinity, temperature, oxygen and pollution, among others--to various scientific and public communities across the globe.

Following sea trials,Yacht Express will mobilize through Australia and New Zealand and to Florida before making a special appearance at the Monaco Yacht Show in September, where it will be re-christened.