Dockwise Yacht Transport (DYT) completed its most complex lift-on/lift-off procedure to date using the 532-foot (162.3 meters) transport vessel Combi Dock 1, owned by Combi Lift, whichleft Genoa, Italy on October 7 and arrived safely in Phuket, Thailand on October 28 with seven yachts aboard, including five motor yachts over 100-feet (30.5-meters) in length and a 95-foot (29-meter) catamaran with a 41-foot (12.6-meter) beam.

DYT, best known for its fleet of semi-submersible “float-on/float-off” yacht carriers that eliminate the need for cranes and hoists, expands its service and expertise to include lift-on/lift-off operations with third-party carriers when there is an opportunity to service an additional port that has not been scheduled for access by a DYT ship. 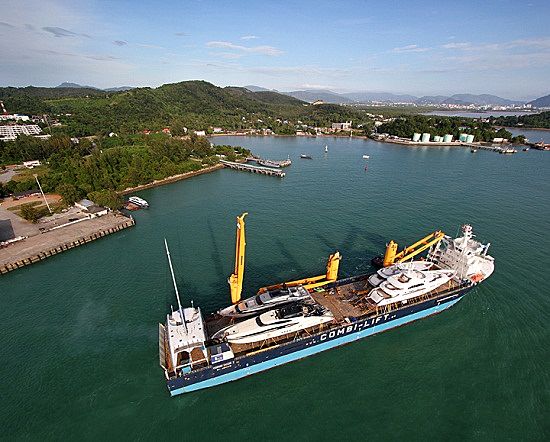 “We have organized many successful lift-on/lift-off voyages but this is the first time Dockwise Yacht Transport has overseen a full load of this magnitude,” said Dockwise Loading Master Jonathan Zier, who added that with the recent increase in pirate attacks off Somalia and in the Indian Ocean, shipping was a safer alternative for yacht owners who were concerned about passing through risky cruising zones on their own. As an added precautionary measure, Combi Dock 1 joined a convoy to pass through the Gulf of Aden.

“By using the lift-on/lift-off procedure we have been able to utilize other third-party cargo vessels and can ship our customers’ yachts to the Far East for one-off voyages,” said Zier. “It’s a way for us to be more flexible and service more of the world’s ports.” 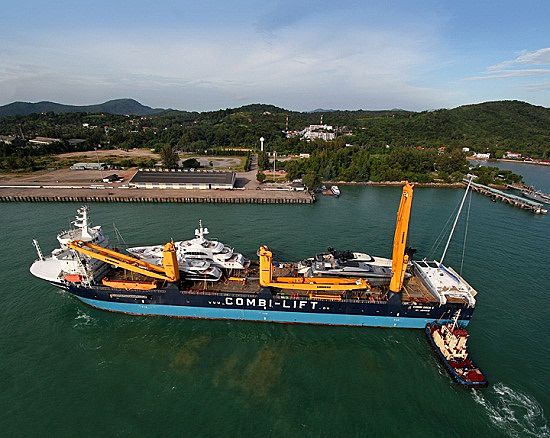 Zier added that many factors go into a lift-on/lift-off operation, including utilizing the right transport vessel and having the top operations team along with the proper lifting gear for each boat that is loaded. “Weight is one of the most critical factors when you are performing this procedure, but it is not like lifting a heavy piece of industrial material. It’s a very involved and delicate process, and in order to make sure everything runs smoothly you need to have people who specialize in handling these types of yachts.”

To celebrate Combi Dock 1’s arrival in Phuket, the Asia-Pacific Superyacht Association organized a party sponsored by Northrop & Johnson and Helm Magazine for the crew onboard, welcoming them to the region. With Southeast Asia developing as a new market for European yacht builders and an emerging cruising destination for yacht owners, DYT will be offering several future yacht transport voyages per year to and from this region and other Far East ports of call.