It’s a match made in heaven—the partnership between Rosebud Racing, the STP65 team that has been making headlines since its launch in 2007, and Dockwise Yacht Transport (DYT), the world's leading yacht logistics company with its own fleet of semi-submersible ships.

Last April, the two entities merged philosophically in purpose and physically transformed Roger Sturgeon’s (Ft. Lauderdale, Fla.) Farr-designed STP65 Rosebud into Rosebud/Team DYT, replete with a re-branded hull and sails that left no doubt about DYT’s commitment to keeping the boat on schedule and in the spotlight as it traveled the world. 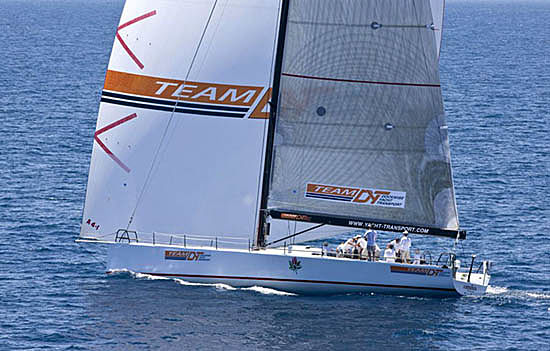 Winning the New York Yacht Club’s (NYYC) Race Week at Newport presented by Rolex and the Storm Trysail Club’s Block Island Race, Rosebud/Team DYT also took 2008 trophies in the Newport Bermuda Race, the NYYC Annual Regatta Sponsored by Rolex, the Royal Malta Yacht Club’s Rolex Middle Sea Race and the Yacht Club Costa Smeralda’s Maxi Yacht Rolex Cup. It then rang in the New Year by winning the Ft. Lauderdale to Key West Race and taking second at Acura Key West Race Week. It recently renewed its relationship with DYT for another year and plans to next conquer the Pineapple Cup Montego Bay Race. A Spring/Summer schedule on the East Coast has Rosebud/Team DYT competing in the Fort Lauderdale to Charleston Race, the NYYC Annual Regatta and the Storm Trysail Club’s Block Island Race Week presented by Rolex. The boat will then go to the United Kingdom with the goal of topping off its season with victory at Skandia Cowes Week and the Royal Ocean Racing Club’s Rolex Fastnet Race in August.

“Rosebud/Team DYT, while it travels the world, creates a buzz on the docks at some of the sport’s most notable events,” said DYT President and CEO Clemens van der Werf. “The buzz is not only about the team’s performance but also about how the team transports its precious cargo safely and efficiently to each venue, especially over long distances when the boat is best not delivered on its own bottom. We couldn’t be happier with the representation they give us and the enthusiasm they show for Dockwise Yacht Transport’s services.”

Van der Werf noted that it is the personal interaction with DYT’s loading masters that help make captains and owners of sailing and fishing vessels—from 24 to over 200 feet in length--confident in every DYT voyage. DYT operates four semi-submersible yacht carriers, including the new 687.5-foot (209 meter) Yacht Express, which takes regular runs between Ft. Lauderdale and Genoa, Italy. The float-on/float off process that is unique to these ships alleviates worries about wear and tear on the boat.

“Rosebud/Team DYT will be sailing this season with a new main and spinnaker that will show our allegiance to DYT,” said Rosebud Racing Managing Director David Cardinali, “but our commitment to DYT as a sponsor is deeper than a logo on a sail. We are genuinely interested in getting the DYT message out to the sailing community because the company is unmatched in its capabilities and professionalism.”