During the Fort Lauderdale Boat Show the legend called Doggersbank officially re-entered the superyacht market. Since the first Doggersbank hit the water back in 1968 the concept has proven itself over and over again with proud owners taking the sturdy explorers to the outskirts of the world. 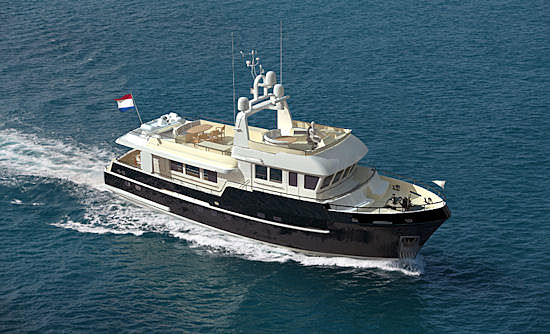 Today more than 500 Doggersbanks have been built in a multitude of different versions, in both power and sail, metal and composite. The Doggersbank is known because of the heavy duty use, low emissions, clean engine rooms and equipment that will run forever.

The Doggersbank is an independent concept. In other words you can say it is like “building the yardless yacht”. This odd interpretation comes in to existence because of Vripack’s innovative construction method called Smart Kit®. Because of this construction method it is possible to build your family dream wherever you would like. With Smart Kit® you can still choose your own yard after you have chosen for Doggersbank.

Smart Kit® makes it possible to save 15% of metal production time, speed up the pre-assembling of units and above all, it saves al lot of man hours meaning lower costs and a quicker delivery.