Home > News > Drama on day two of the Superyacht Cup

Breakages, rough seas, squalls, sunshine and a new leader, the third day of The Super Yacht Cup Antigua had it all. After a night of high winds and huge rainstorms today’s forecast of 15-20 knots saw a calmer day than the first, but none could have foreseen the action, which occurred within the Superyacht Cup fleet. 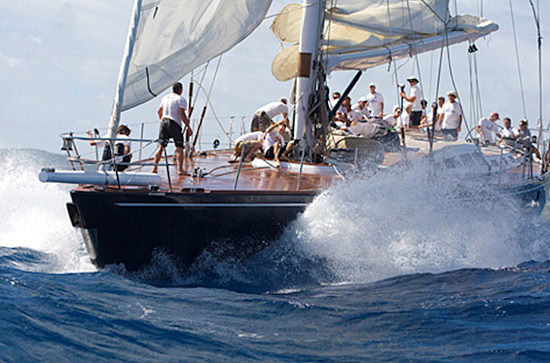 Timoneer stole the lead from defending series leaders Signe after winning both races today, despite having cracked their mizzen boom in the first race. The new Bucket Rating system developed by US Sailings Jim Teeters has been well-received and produced even closer results today. Timoneer started 22 minutes after Tenacious, choosing to go offshore on the first leg resulting in big gains and eventually the lead. Spectacularly the team, all wearing their matching Timoneer embroidered Hawaiian shirts, put up their massive spinnaker in the last race ensuring their continued lead and win of the days overall result.

Wild Horses had less luck suffering damage in the morning race, despite a fantastic start in the torrential rain. Her obvious advantage in the heavier wind conditions would otherwise have surely given her a good result. Unfortunately though, the damage resulted in them being unable to finish the first race and they were forced to return to the dock.

Another casualty in these testing conditions was Tenacious, who after a promising start to the second race, lost their main halyard and had to send someone aloft, a daring call in such big seas. Despite their best efforts to effect repairs at sea they were forced to retire.

Faroux designed Kalikobass II had a far more successful day, moving steadily up the fleet to score a third and second. The only boat to hoist a spinnaker today in both races despite the gusty conditions, the Kalikobass crew were proud of their improved result and are currently lying third overall in the series.

Valencia Yacht Base hosted the evening 'Happy Hour', which was well received by all the thirsty crews after a great day sailing in the tropical conditions of the Caribbean.