On September 23rd Dream Ship Victory signed a contract with Dykstra & Partners for the Naval Architecture and Ken Freivokh Design for the design and styling of Dream Symphony. With a length of 141 metres she will be the largest Sailing Yacht ever built. 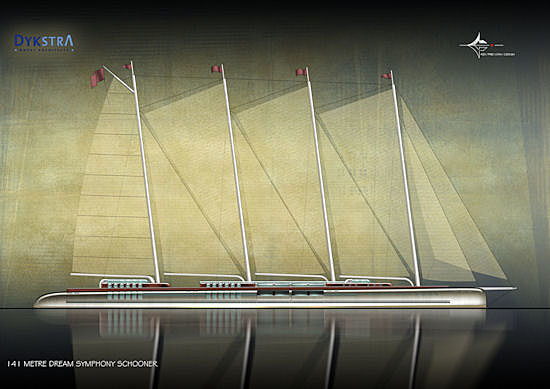 Dream Symphony will not only be the largest, but she will uniquely be of all wood construction. Dream Ship Victory, with the same naval architecture and design team, already have considerable experience in large scale all wood yachts and the three yachts currently in build total 162 metres.

The 65 metre Mikhail Vorontsov is now being fitted out in Holland and work is progressing on Princess Maria (55 m) and Imagination (42 m).

Contracts were signed between Valeriy G. Stepanenko, owner of DSV and responsible for the project concept, Gerard Dijkstra and Thys Nikkels on behalf of Dykstra & Partners, and Ken Freivokh on behalf of KFD. An initial concept was presented at the Monaco Yacht Show on the Dykstra & Partners stand and construction will start in 2011.