Once again, the world’s largest indoor water sports trade fair, the boot 2007, came to a successful close this year. Over 273,000 visitors from across the world came to Düsseldorf to gain information about premieres and products, as well as advancements and industry projects.

“Despite the decline in visitors, the boot 2007 has continued the economic momentum generated by last year’s fair,” summed up Jürgen Tracht, Managing Director of the Bundesverband Wassersportwirtschaft. “Quality definitely compensated for quantity. Sales and orders at the stands were brisk. The level of intensive and qualified discussions also suggests that excellent follow-up business will take place after the fair.” 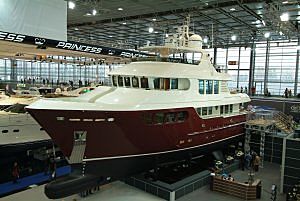 Drettmann GmbH’s boot 2007 experience backs up this statement. This year, with an impressive exhibition space of over 3,100 square meters, the agency presented the largest boat at the fair, the Bandido 90 – a world premiere in the new Explorer ship category – as well as the Elegance 90 Mega.

Albert Drettmann, representing the second generation of family ownership, was very pleased with the outcome of the fair, despite the lower attendance figures (mainly caused by the storm “Kyrill”). However, he notes that the objectives for the trade fair were set much higher this year. “Our contacts to a further top-class clientele segment now require skilful negotiation and care. Feedback concerning our first rate, high-quality products has been very positive and our global name recognition has increased noticeably.”

Weighing in at 170,000 tons, a big crowd puller and certainly the press highlight of the fair was the voluminous explorer ship with a red hull – the Bandido 90. With it, Drettmann GmbH has brought a new yacht generation to life, expressly tailored to the needs of its customers. Customer demand has been correspondingly high – several preliminary contracts were signed during the fair.

Drettmann GmbH thus enjoys a ringing endorsement for its company philosophy, which encompasses the blend of individuality, luxury and innovative technology. The company’s goal for the boot 2008 is the launch of a further new yacht range – the Elegance Open Sport Yachts. An offshore yacht in a class of its own!