On Friday, October 29th, 2010, Driscoll Boat Works celebrated its 6th Annual Pumpkin Toss. About 100 people turned out for this year’s event, which originally began as an employee appreciation party and is co-sponsored by Rocket Research. However, as the years pass, it has turned into a well-known Shelter Island tradition, attracting yachts crews, local neighbors, as well as visitors from all throughout San Diego. 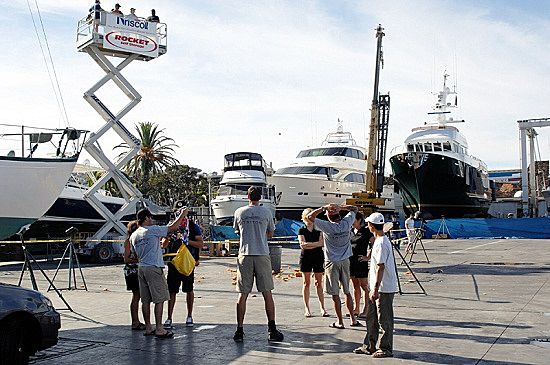 This year Driscoll welcomed the yacht crews of M/Y Apogee, M/Y Triton, and S/Y Jagare as well as several other boat captains and crew in the San Diego area. In addition to the traditional Pumpkin Toss, entertainment included pumpkin carving and a Dodgeball Tournament. Guests were also treated to a pig roast, which included a 65 pound pig, roasted right in the yard paired with rice and beans from local vendors.

The Pumpkin Toss involves pitching pumpkins off a 40 foot scissor lift, in hopes of making it into a water-filled trash can below. This year’s winners included Matt M. of M/Y Triton, Pierre O. of S/Y Jagare, and Driscoll employees Tommy M. & Jesus A. The event is popular because in addition to the competition aspect, throwers get a chance to see a gorgeous panoramic view of the San Diego Bay, including Shelter Island, Point Loma, and the Downtown skyline.