Imagine walking down the street and seeing a slew of pumpkins hurling down from 40 feet in the air. Now imagine those pumpkins set to the backdrop of million dollar sailing and motor yachts. For five years now, this has been a familiar sight to the residents of Shelter Island, the close-knit marine community of San Diego, as Driscoll Boat Works partnered with Rocket Research to celebrate its annual Halloween Pumpkin Toss. 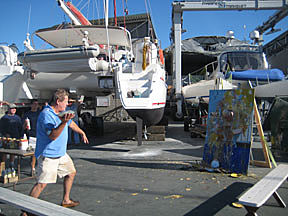 This year’s theme of “Pumpkins, Pies and Pigs” included a pie toss, pie eating contest and pig roast in addition to the traditional Pumpkin Toss. The pie toss, nicknamed “Chuck-a-Pie,” a new event to the festivities was an instant hit as employees lined up for a chance to smash a pie into Driscoll Boat Works owners Tom and Chuck Driscoll’s faces. The pie toss became an even messier affair when Rocket Research pranksters, Jim Collins and Craig Stevens unveiled the not-so-usual ingredients for the pies which included mustard, tapioca, nacho cheese, and peas among other interesting items.

With San Diego’s beautiful year-round weather Driscoll is able to organize outdoor events like this and others regardless of the season. Its convenient and long standing location is a welcoming port to yacht crews around the world.