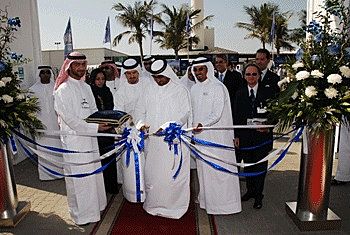 As the largest marine event ever held in the Middle East, DIBS, organised by Dubai World Trade Centre, has attracted thousands of visitors from across the region with many travelling from Qatar, Bahrain and Kuwait specifically for the event.

"To have so many trade and leisure visitors coming on the first day of the show demonstrates the significance the Dubai International Boat Show has in the marine calendar. This is a result of the huge variety of boats, equipment, attractions and accessories at the show this year, ensuring there is something to suit all tastes and budgets," said Helal Saeed Al Marri, Director General, DWTC.

After officially opening the boat show in front of record first day crowds HH Sheikh Ahmed Bin Saeed Al Maktoum and the royal party toured the exhibition in which more than 700 companies are taking part.

There is also the External Area, which showcases small to medium sized craft; and the Equipment Supplies and Services Area, grouping together an extensive range of marine equipment supplies and services

Taking place from the 13 to 17 March at the Dubai International Marine Club, the event is the largest display of boats, marine supplies and services in the Middle East, attracting consumer, marine enthusiasts and trade buyers from across the world.

The on-water area has been specially expanded to accommodate increased demand from exhibitors, with 142 boats on the water throughout for the event. This year’s Boat Show also sees a 53 percent increase in participating companies.

The show is open free of charge to trade with general public tickets costing AED 35 per person. Access to the on-water marina area may be restricted at times and children under the age of 12 must be accompanied at all times.

As well as viewing the state-of-the-art watercraft on display at the show, visitors will have the opportunity to win a brand new Yamaha SuperJet WaveRunner and a Laser Pico dinghy.

Marine industry professionals will also be taking part in the 3rd Gulf Boating Conference, which takes place at the Boat Show on the mornings of the 14 and 15 March, and is this year entitled, "The Expanding Regional Market".

Parking at the Dubai International Boat Show is free of charge and is conveniently located just 3 minutes away. Free shuttle buses will be on hand to transport visitors to and from the venue.