For the Dutch, nirvana is to savour a raw herring followed by a swig of good Dutch beer. Oceanco’s latest launch, the 88.50m (290.36ft) yacht Nirvana, with the yard code of Y707, had a proper culinary Dutch send off. 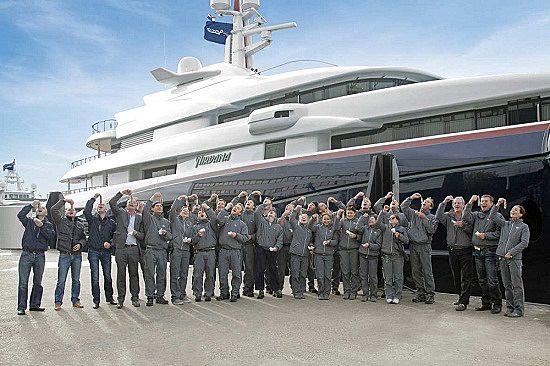 A few days after the formal launch party, the crew of Nirvana were treated to an intimate farewell party on April 18th where they were invited to partake in the famous raw herring ritual.

The Owner's representatives, the Captain and his crew together with the Oceanco team gathered alongside Nirvana to celebrate the culmination of many months of intense and professional cooperation among all involved.

During the festivities, the Oceanco team thanked the Owner's representatives and the crew for their outstanding teamwork. Captain Brett Fillis, for his part, warmly repaid the compliment to everyone who had been involved in this great venture, offering special commendation to his crew for the fantastic job they did in receiving the yacht and getting her ready for sail in a very short time span.

Nirvana is currently cruising in the Mediterranean where she will remain for her first summer season.