Super Servant 4 assisted racing sailors Thierry Chabagny and Erwan Tabarly aboard their dismasted yacht Gedimat, which had radioed the ship for help on April 23. The 32 foot Figaro Beneteau II is competing in the Transat AG2R La Mondiale, a 3890 mile double-handed race that began on April 6. 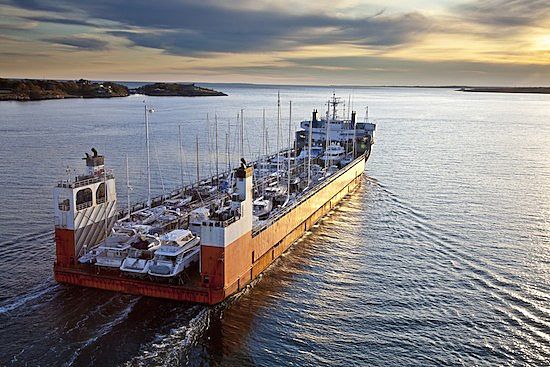 Gedimat had dismasted during a gale and its diesel had run dry as the vessel tried to reach the island of Madeira. With no reported injuries aboard Gedimat, Super Servant 4 proceeded to divert and deliver two drums with 20 litres of diesel in each. Gedimat was leading the fleet at the time of the rig failure and had approximately 1900 miles to go to reach the finishing point at Saint Barthelemy.

Late last year, DYT Yacht Transport partnered with another leading yacht transport company, Sevenstar Yacht Transport. The two companies are fully equipped to advise on the best options for either float-on/float-off (FLO/FLO) or lift-on/lift-off (LO/LO) services offered by a fleet of over 120 ships that are wholly owned and operated by parent company, the Spliethoff Group.