It is rare to visit two brand new superyachts by the same shipyard on the same day, but that’s what happened when SuperYacht Times was invited by Cantiere delle Marche in Ancona to go aboard its new RJ130 and Flexplorer yachts. Both are 40-metre steel and aluminium explorers with naval architecture by Hydro Tec, but when viewed side by side they look totally different. 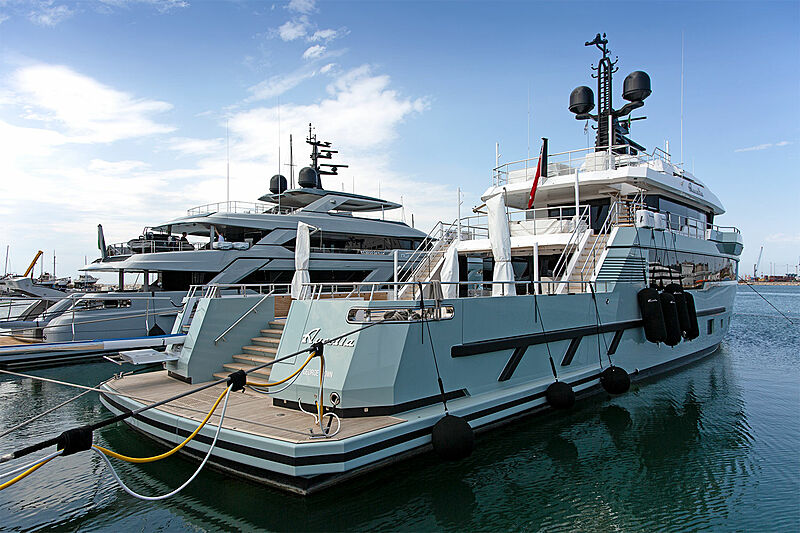 Photo: Justin RatcliffeWe were the first to visit the now finished superyacht RJ130 after her launch in January. Originally known as the MG line designed inside and out by Francesco Paszkowski, the name was changed when the owners, upgrading to their first steel-hulled displacement yacht, decided to call the first unit RJ after their initials. 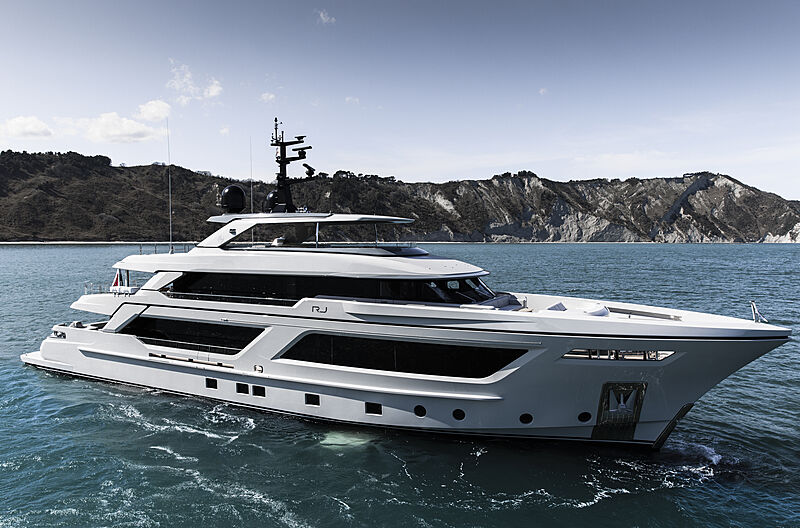 Photo: Guillaume Plisson“The RJ line is basically the heir to the successful Nauta Air series aimed at owners who want something less rugged looking than our Darwin or Flexplorer yachts,” says CdM Sales & Marketing Director Vasco Buonpensiere. “It’s a game changer for CdM and brings in clients who like the idea of a real explorer but prefer the superyacht aesthetics.” 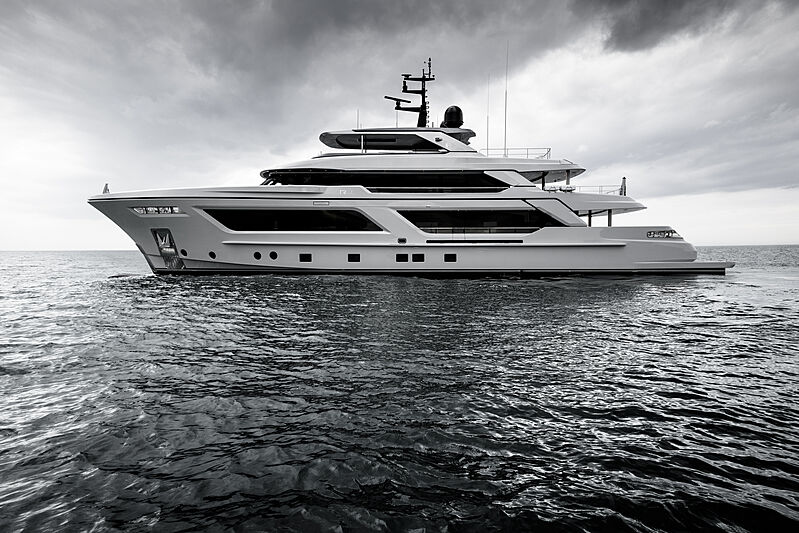 Photo: Guillaume PlissonRJ’s exterior styling and light grey livery is still purposeful but more classically elegant than Aurelia’s robust lines, open aft deck and A-frame crane. RJ does not have a tender garage and the space in the stern is used instead as a technical space and for storing toys like bicycles. A 5.2-metre Rupert RIB (as used by the Swedish military) is housed on the upper aft deck with a crane integrated into the overhang of the sundeck. The yacht will also tow a Wally Power 47. 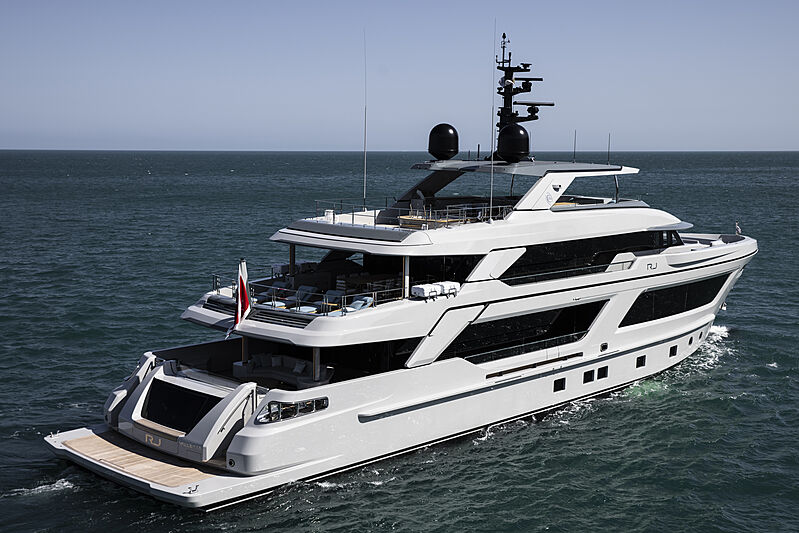 Photo: Guillaume Plisson“The brief was for an explorer with large social spaces both inside and outside, offering a close contact to the sea to enjoy staying on board during long-distance cruising everywhere,” says Paszkowski. “We focused on combining the essence of an explorer with peculiar features in terms of comfort and liveability to design the yacht her owner was expecting.” 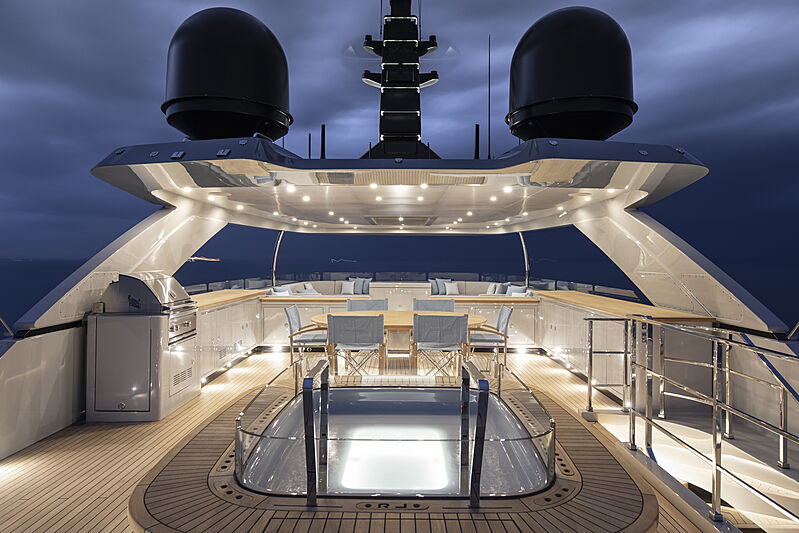 Photo: Guillaume PlissonAurelia’s exterior lines by Sergio Cutolo of Hydro Tec are a study in function over form and their utilitarian purity – even down to the black-painted rub rails like on workboats – has an appeal all of its own. The highlight of the exterior concept is the A-frame crane, another feature borrowed from commercial vessels. Made of carbon fibre by Advanced Mechanical Solutions (AMS) with a 3.5-tonne capacity, it is used for launching and retrieving an 8.5-metre Jokerboat Clubman and a William Dieseljet 445, as well as other toys. 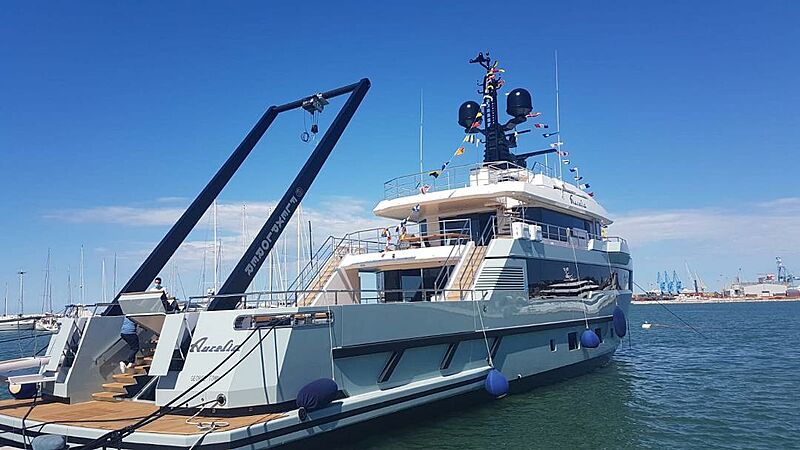 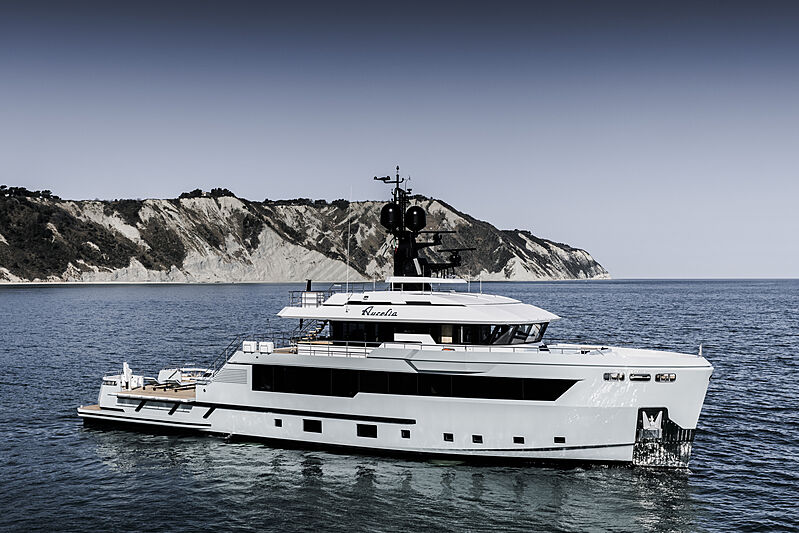 Photo: Guillaume PlissonDespite the gentle camber that is a feature of all CdM yachts, the crane recesses perfectly into the deck and the teak planking is cut at 45 degrees to disguise the join. In future editions of the Flexplorer the crane will be full-beam so the crane pockets are flush with the bulwarks and can have two or even three lifting points. Buonpensiere jokes that the yard has become “an expert at invisible cranes!” 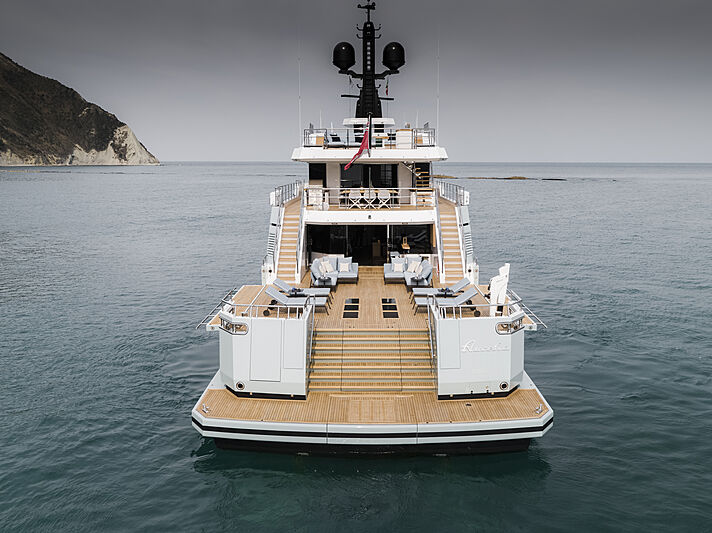 Photo: Guillaume PlissonOther notable features are the collapsible bulwarks on both sides. Once the bulwarks are folded down and the aft deck cleared of tenders it becomes a beach area of more than 115 square metres. As requested by her owner, a repeat CdM client, Aurelia has a fully equipped gym in the stern on the lower deck with six overhead skylights so it can also be used when under way. 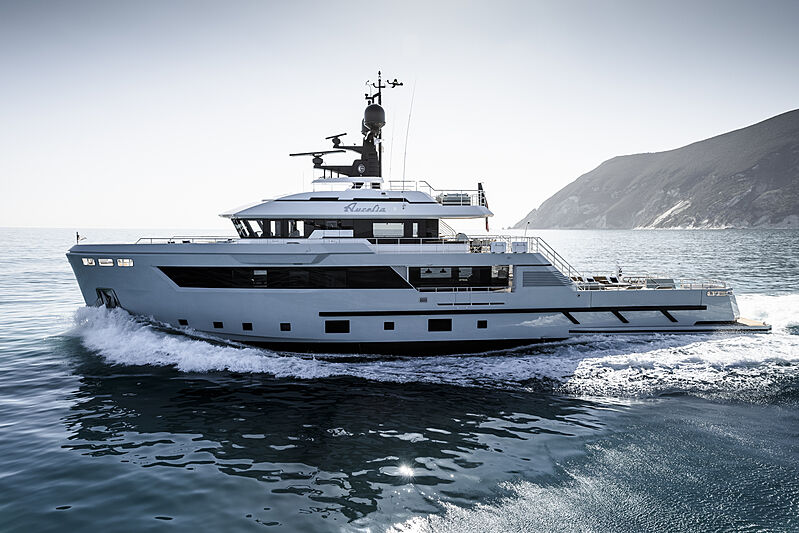 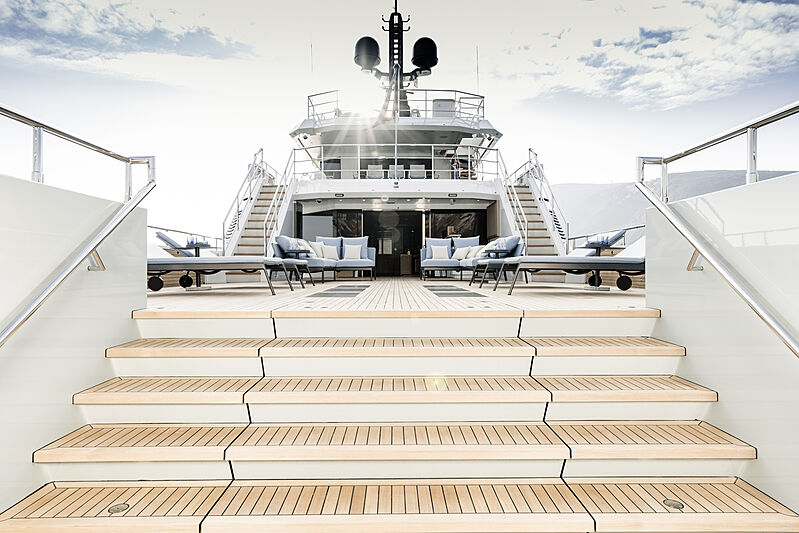 Photo: Guillaume PlissonThe aesthetic differences between the two yachts are even more apparent on the inside. RJ’s interior by Francesco Paszkowski and Margherita Casprini is representative of the Florentine studio’s low-key, timeless and sophisticated style. “The owner’s brief for a welcoming and elegant interior was achieved by putting an emphasis on predominantly light, neutral hues combined with dark shades and some unique furniture pieces, matching the same materials in different ways while keeping the same atmosphere everywhere,” says Paszkowski. 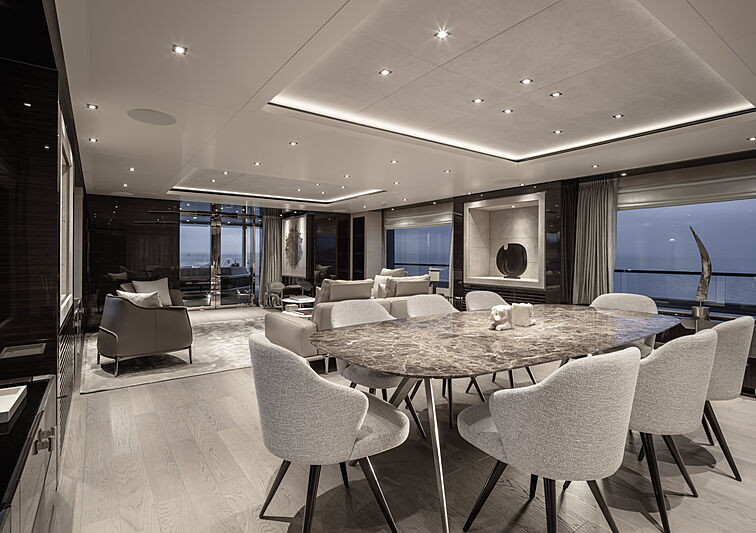 Photo: Guillaume PlissonThe main woods are bleached and brushed oak for the wall panels and floor, and rosewood combined with brushed oak for the furniture pieces. Jerusalem stone appears in all the bathrooms and leather enhances the elegant, understated vibe on board. Italian designer brands include Minotti, Poltrona Frau, Flexform, Zucchetti and Paffoni. 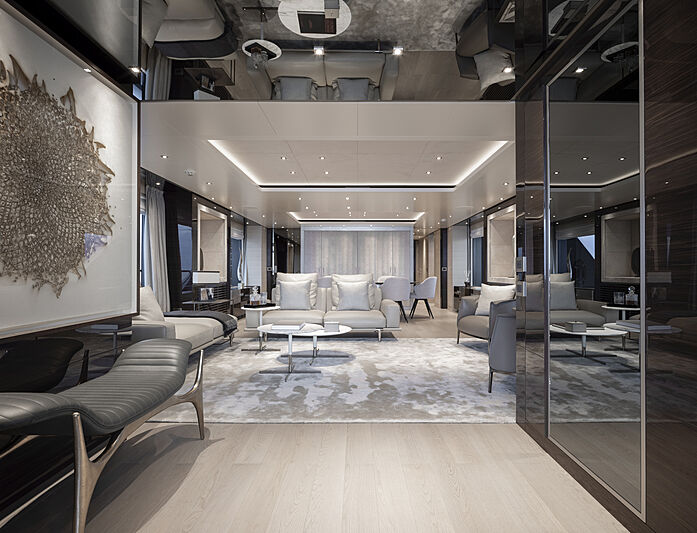 Photo: Guillaume PlissonA novel feature is the glass sliding door into the galley on main deck, which becomes a show kitchen (although there is a second door to the main salon and dining room), and the adjoining pantry that also has access to the starboard corridor leading to the master stateroom. 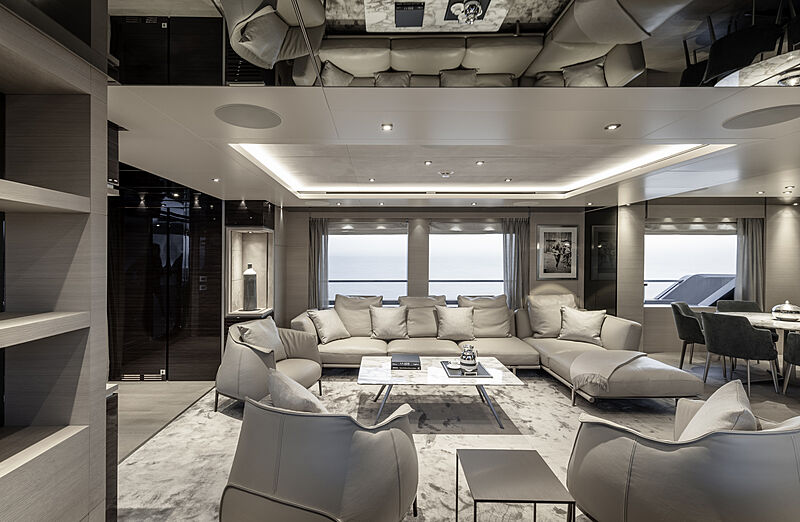 Photo: Guillaume PlissonAnother pleasant surprise is the size of the sky lounge on the upper deck, which can seem a bit of an afterthought on yachts this size. RJ’s includes a games ‘room’ separated from the lounge proper with drop-down TV screen by a partial glass screen. There is even space for a proper ship’s office and the captain’s cabin behind the wheelhouse. RJ’s master stateroom is on the main deck forward and there are four ensuite guest cabins on the lower deck (the two twin single cabins also have Pullman bunks). 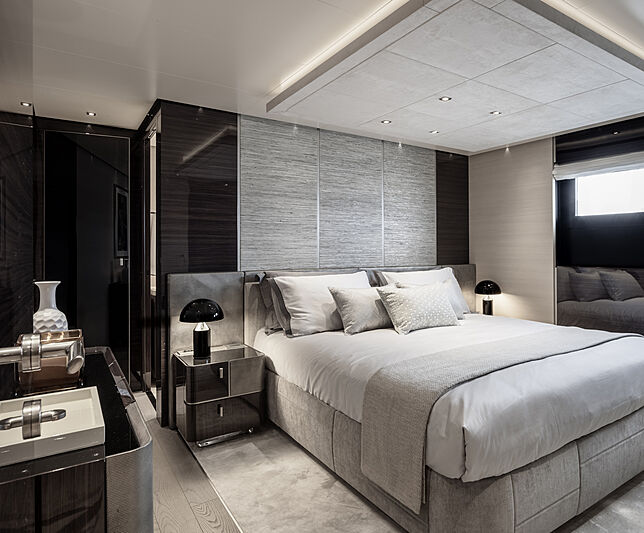 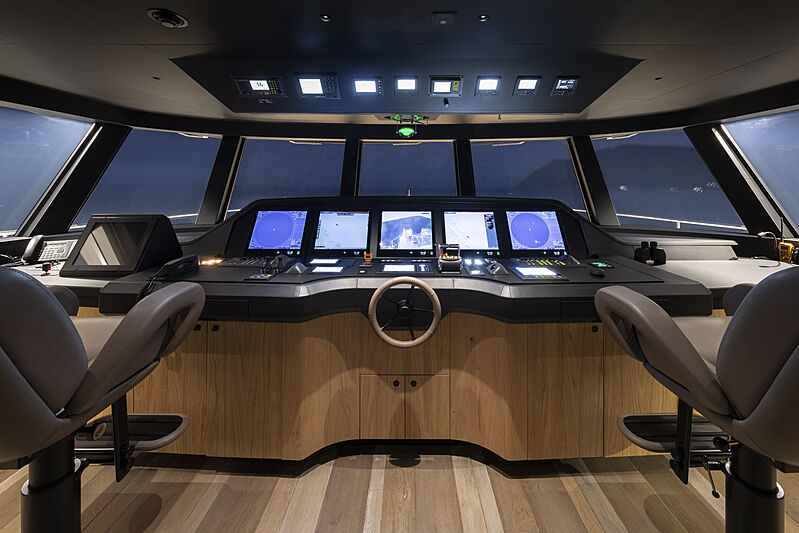 Photo: Guillaume PlissonAurelia’s interior, on the other hand, sees Paszkowski stepping out of his comfort zone and is utterly different from anything else on the water. The owner, a connoisseur of antique furniture, wanted to fill the yacht with objects that have a vintage patina and materials such as natural oak, iron, slate and even cement for a New York-loft feel with a steampunk twist. 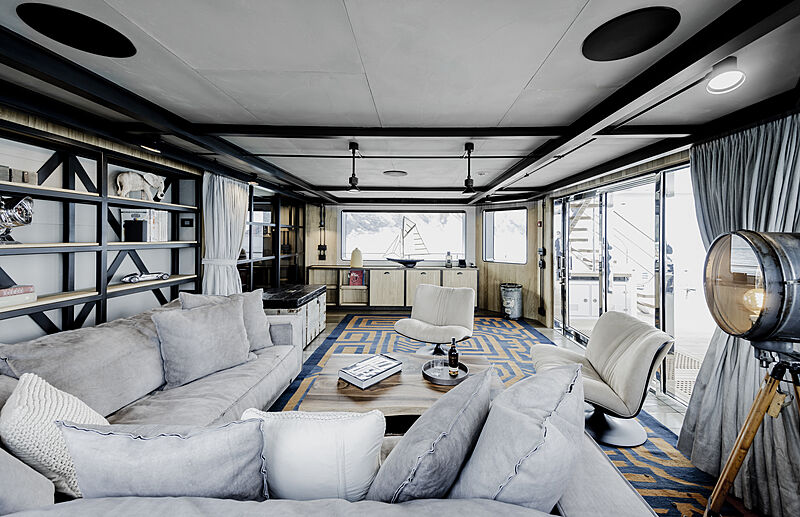 Photo: Guillaume Plisson“I’m quite peculiar when it comes to interior design,” says the owner. “I don’t like houses and boats furnished with what is normally shown in design magazines around the world. It’s like fashion: market driven and doesn’t say much about the owner. The cooperation with Francesco Paszkowski and Margherita Casprini has been fundamental in reaching a stunning result, which I think is going to be a first in yacht interior design.” 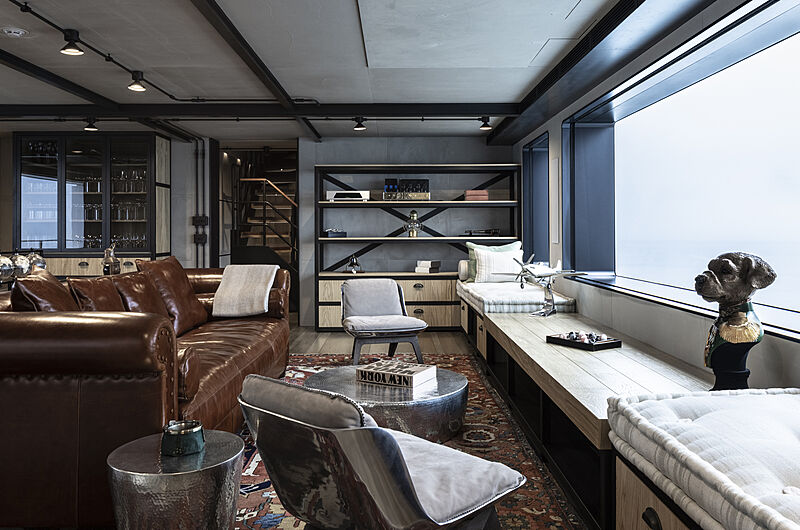 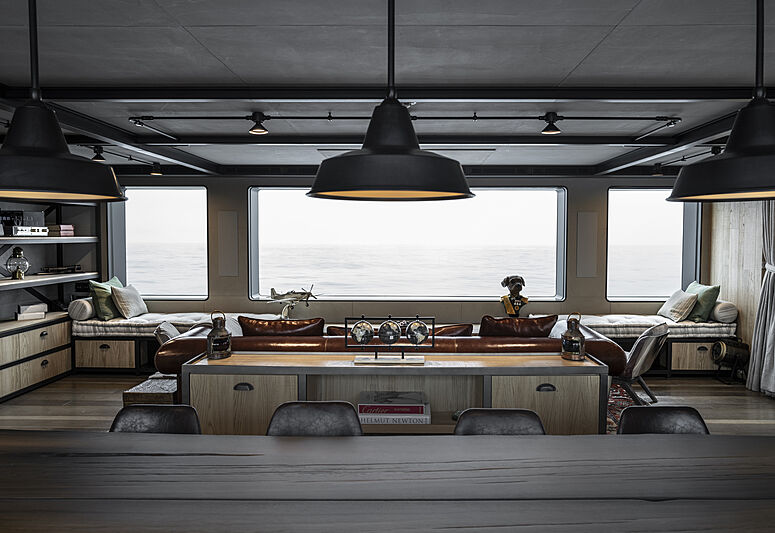 Photo: Guillaume PlissonCosy, leather-upholstered furniture is combined with fossil wood, black lacquered metal, antique light switches and exposed electrical conduits for an ambience that is warmly informal and inviting. A centrepiece in the main lobby is an all-glass, temperature-controlled wine rack fashioned to look like an old elevator that is integrated into the stairwell and extends from the main lobby to the upper deck. 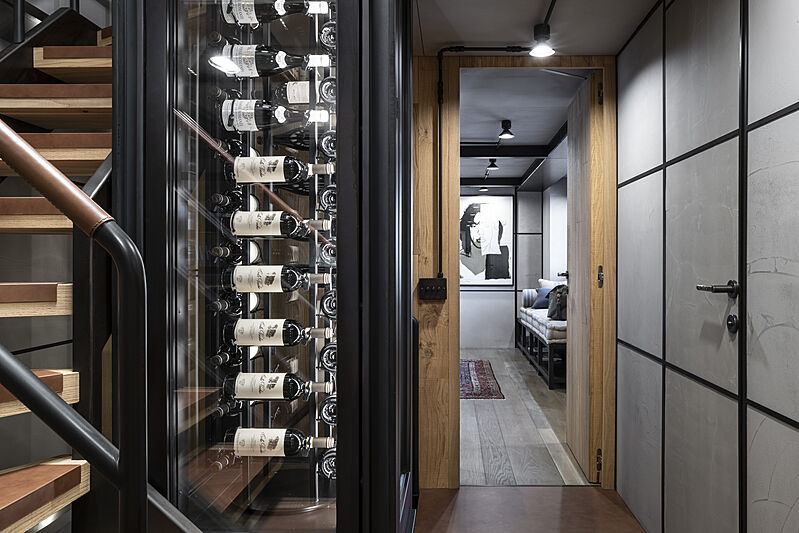 Photo: Guillaume Plisson“Designing the interior of Aurelia was really challenging,” says Paszkowski. “It was a perfect team job among all the players involved, which gave us the opportunity to explore unprecedented design solutions.”  The layout is asymmetric on main deck with a side deck to port for crew to move between the aft deck and the galley/crew quarters without having to pass through the main salon. In addition to the master stateroom on the main deck forward, Aurelia has three ensuite guest cabins on the lower deck (a dedicated laundry room replaces a fourth cabin). An under-lower tunnel provides space for extra cold and dry stores and access to the four stabiliser compartments (the electric fins work in conjunction with the rudders using CMC’s Argo system for better course stability and steering control). 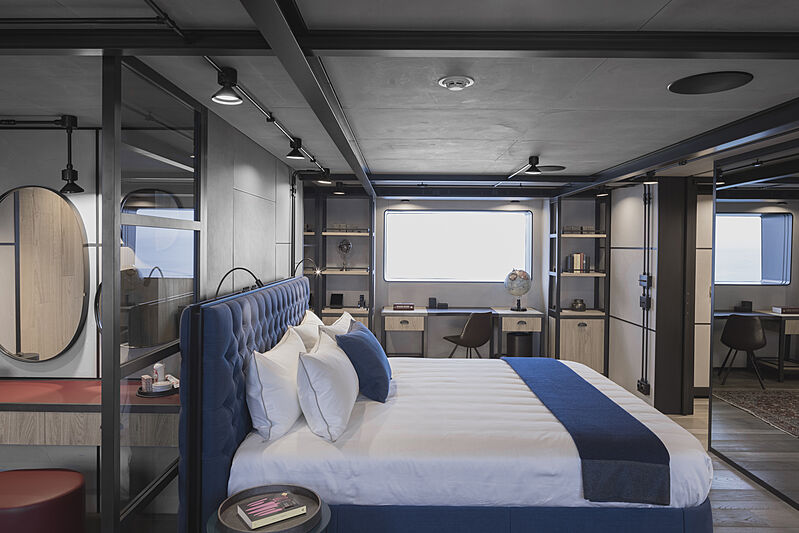 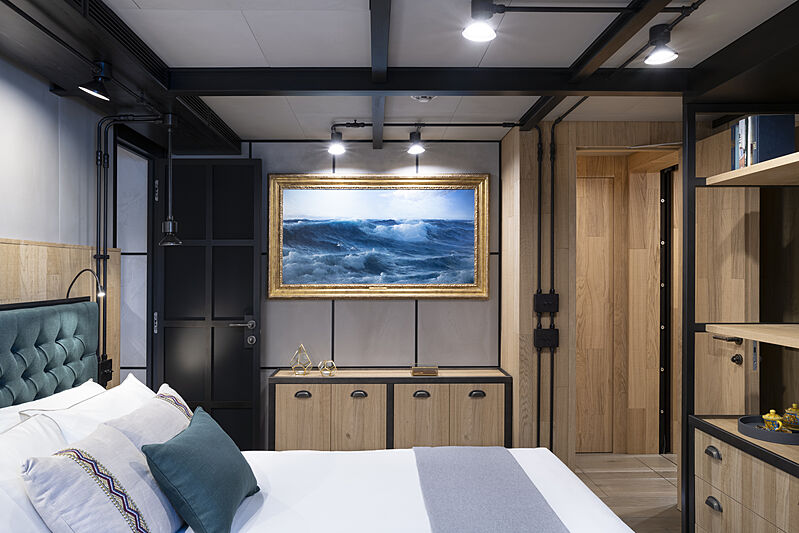 Cantiere delle Marche is renowned for the spacious functionality of its engine rooms and in this sense RJ and Aurelia do not disappoint. In both cases, the quality finish and ease of accessibility for maintenance is exceptional on a 40-metre yacht. Captain Gabriele Carniglia even took me inside RJ’s bulbous bow that can be used for storage and has the same powder-coated footplates with perfectly aligned anti-skid patterns as the more visible technical areas. 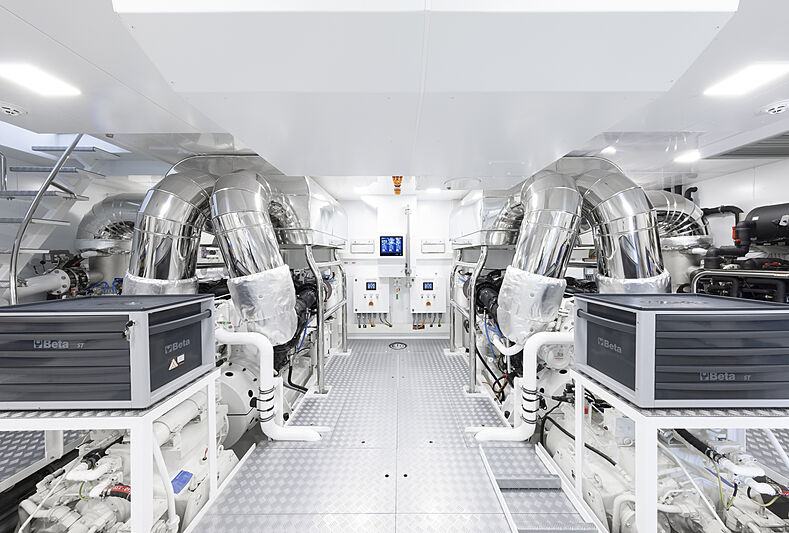 Photo: Guillaume PlissonAurelia is the more voluminous vessel at 453 GT compared to RJ’s 397 GT, but both yachts are designed for economical, long-distance cruising. Powered by twin Caterpillar heavy-duty engines (746kW @ 1600/1800 rpm) Aurelia has a top speed of 14 knots and a cruising range at 10 knots of more than 5,000 nautical miles. RJ is equipped with twin MTU diesels (900kW @ 2,250 rpm) but has a comparable range and top speed. 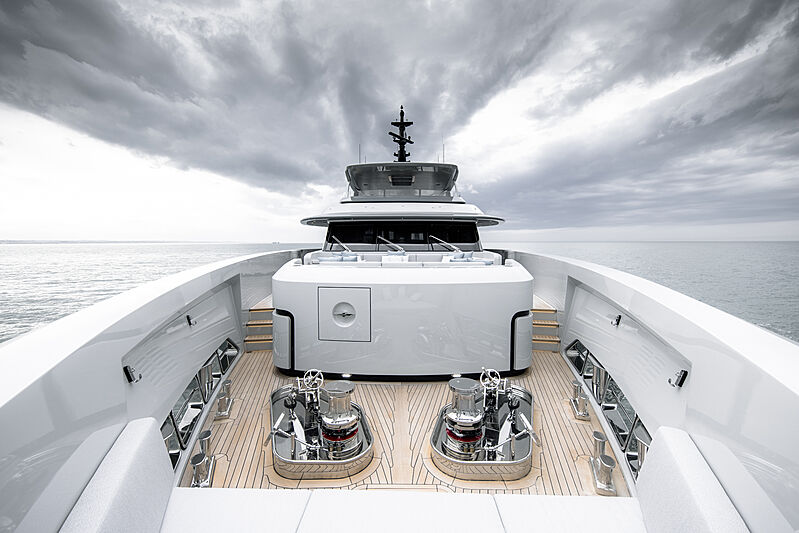 Photo: Guillaume PlissonAurelia and RJ are effectively two sides of the same coin: seaworthy explorer yachts designed for world cruising, but ‘dressed’ differently to appeal to their owners’ needs and tastes. Taken together they highlight just how diverse the growing niche market for steel-hulled explorers under 500 GT can be. Two more RJ 115 hulls and a Flexplorer 145 are currently in build with a contract for another RJ 115 confirmed at the time of writing. Other projects in build include the one-off 42.90-metre Acala, a Darwin 106 and a Darwin 112. Construction is also due to start on a Darwin 86 with an ice belt for cruising high latitudes. The yard reports that three more contracts are being finalised. Cantiere delle Marche is planning to exhibit Aurelia and RJ at the Cannes Yachting Festival and Monaco Yacht Show in September. 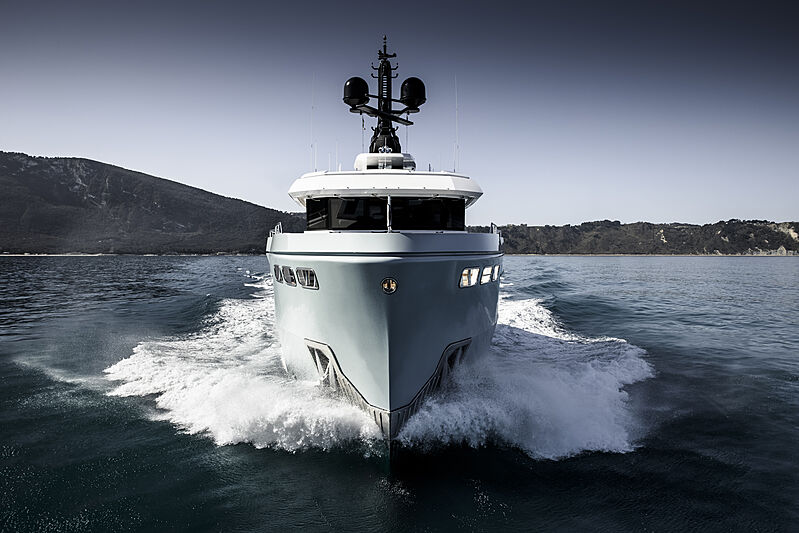 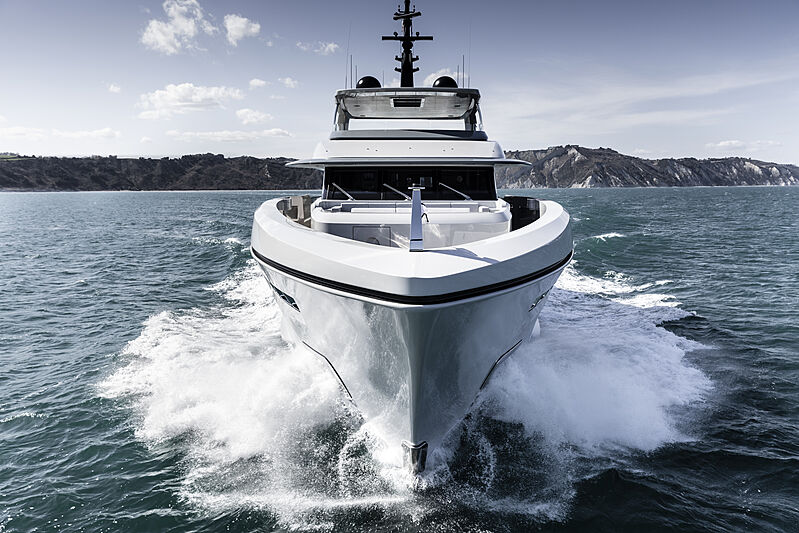 Completed in lockdown: The build story of the 39m CdM Flexplorer Aurelia