There are generally two types of yacht concepts: those that inspire and those that can be built. The Pentagramma concept by Luca Vallebona – the designer of the 41.5-metre Serenity launched by Mondomarine in 2015 – is a rare example of both types in one. The 82-metre motor yacht concept is not only strikingly beautiful with an innovative layout, it is also eminently buildable. 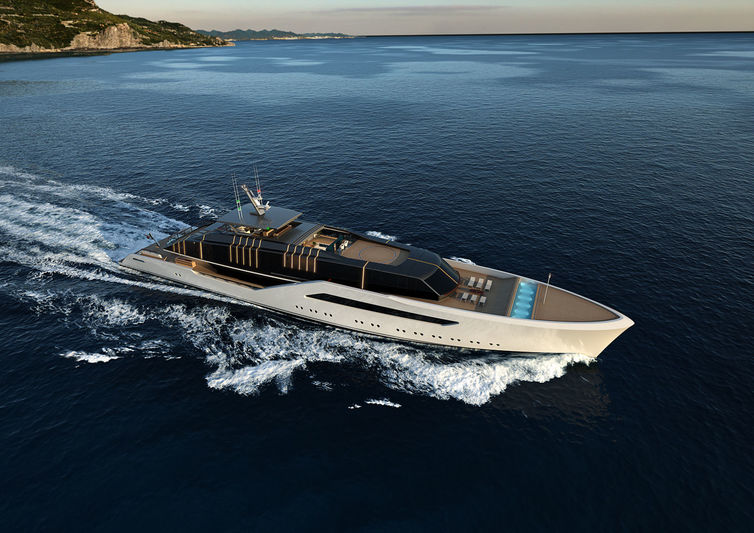 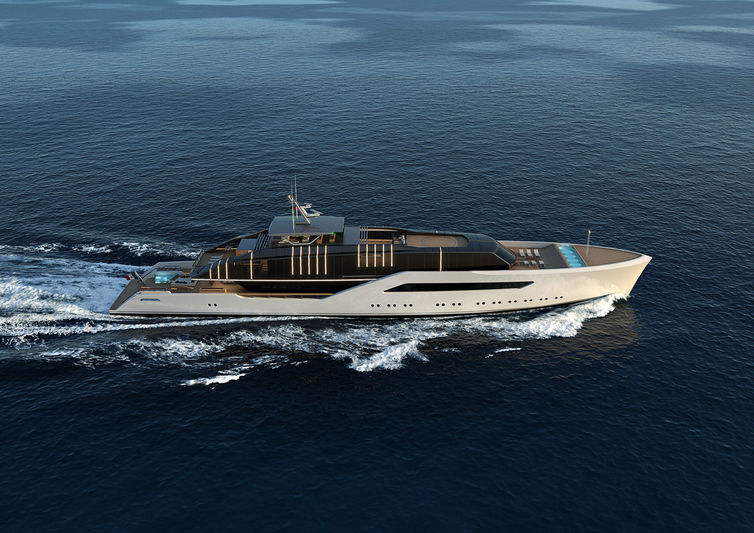 The glass-clad superstructure appears suspended above the hull, an impression reinforced by the vertical brass strips (backlit so that they glow at night) that help to break up the mass of the structure, and by the central V-shaped brace that supports the overhanging upper deck aft instead of the standard pillars. 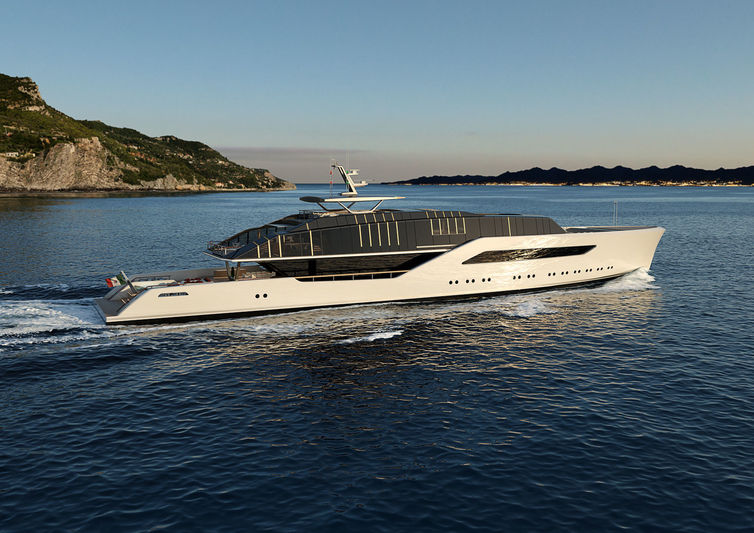 The low-rise profile belies an enclosed volume of approximately 2,000 GT and ceiling heights at main deck level of around three metres. This has largely been achieved by introducing some novel layout solutions. 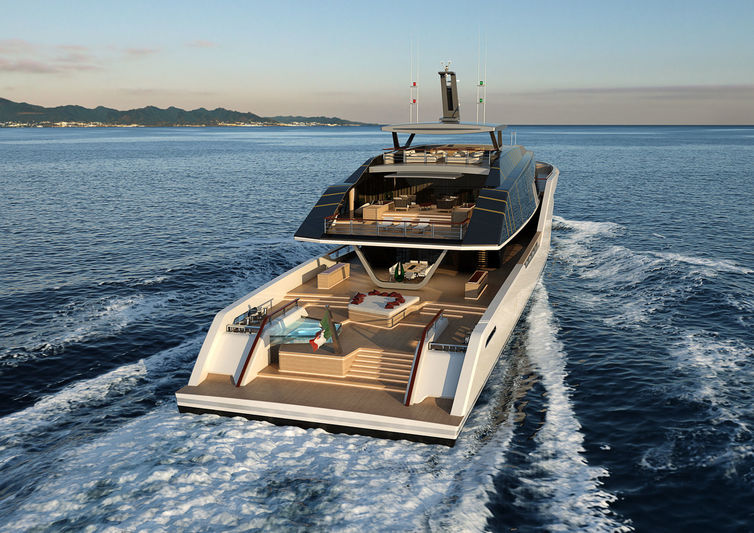 For example, instead of plonking the helipad on the foredeck, which features a full-beam pool instead, the heli ops have been relocated to the sundeck. Guests can disembark from the helicopter and be ushered into the semi-covered ‘loggia’ a half-deck below for a welcoming cocktail (from where there is also direct access to the gym and sauna on the bridge deck). This unusual space, which is shaded by a sun awning and has side windows that can be raised to increase the natural ventilation, represents a totally new way of using the top decks as discreet socialising areas. 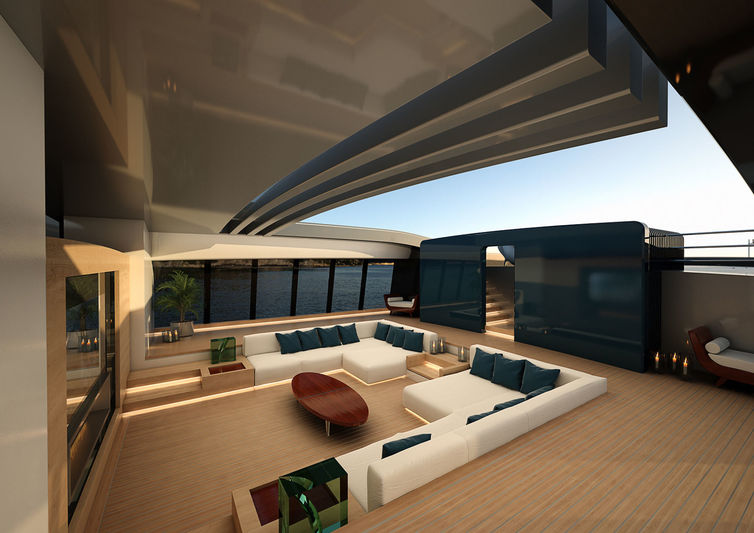 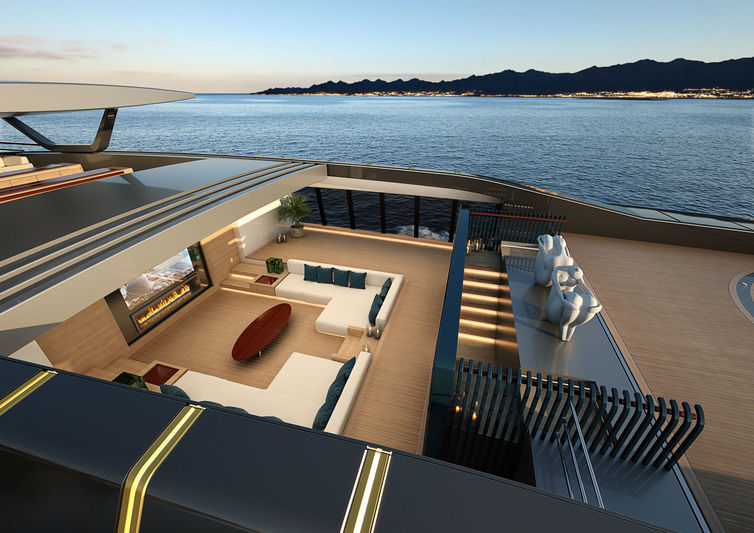 There is still plenty of space for sun worshippers, principally on the forward and aft main deck. The latter effectively serves as an open-air beach club, with an asymmetrical, terraced arrangement leading down to the swim platform.

“Asymmetry is something I’ve been experimenting with for some time,” says the Sardinian designer. “Asymmetry is rare on yachts, but I feel it adds an extra layer to the onboard experience that is both surprising and pleasing.” 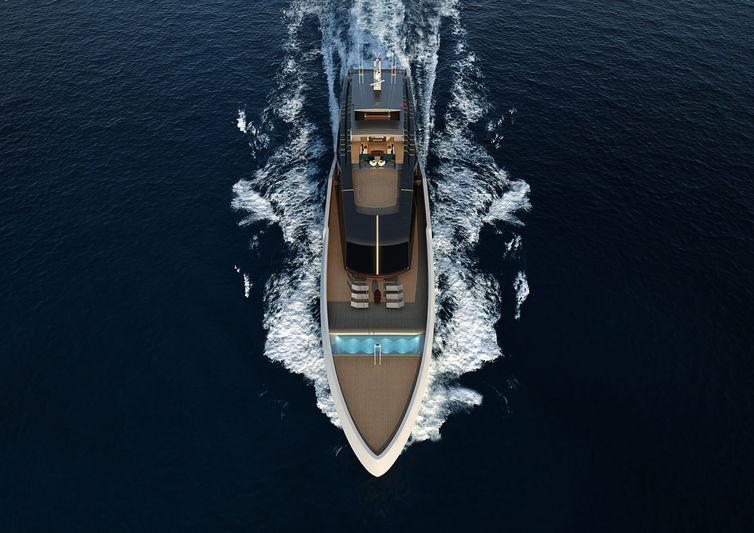 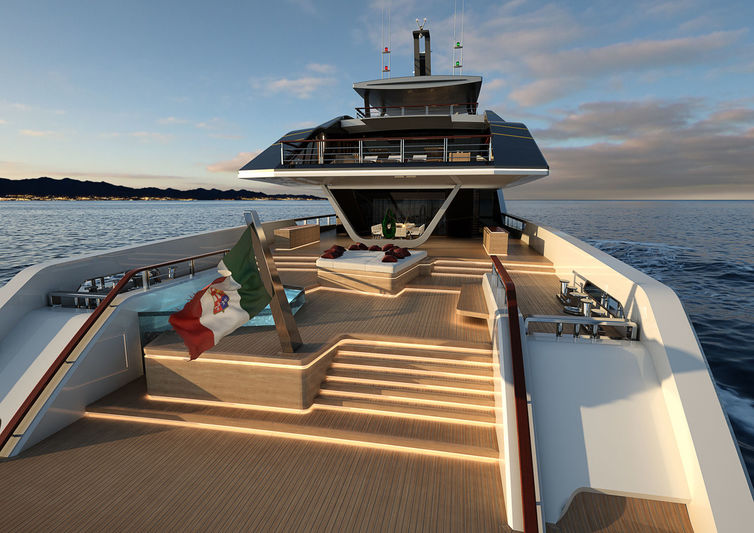 In fact, the interior arrangement features curved bulkheads, winding corridors and even a ‘secret’ bar. Unusually, the full-beam owner’s apartment is placed between the main lobby and the forward tender garage on the main deck.  The suite has access to two built-in balconies, one of which has its own pantry, or what Vallebona calls the ‘secret bar’.

Located close to the galley, the idea is that the balcony can serve as a cosy corner for the owners to enjoy a quiet breakfast on their own, and was inspired by the hidden service passageways that were often built into the architecture of Italian stately homes.

Before setting up on his own in 2013, Vallebona studied architecture and yacht design and worked for Nauta Design in Milan, where he was principally involved in developing the general arrangements of sail and motor yacht designs. This academic and practical experience has given him an astute sense of how to make the most of available volume and link different spaces together intelligently. 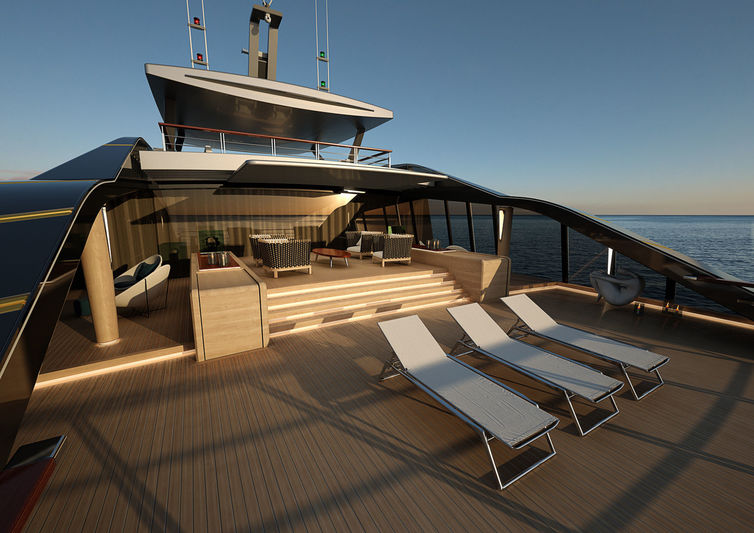 “There’s a lot of talk about blurring the barrier between exterior and interior on yachts,” says Vallebona. “In most cases, this usually just means putting in bigger windows or sliding glass doors, but that’s only half the battle: you also have to provide better circulation flow between the inside and outside on different deck levels.”

By way of example, Vallebona points to the lower deck guest cabins comprising four suites (the full-beam VIP cabin can also be split in two). The accommodation lobby has a stairway leading directly to the main deck beach club, so guests can step out of their cabins and can go straight outside without having to first reconnoitre corridors and lifts (in fact, the low-rise Pentagramma has been designed on purpose without elevators). 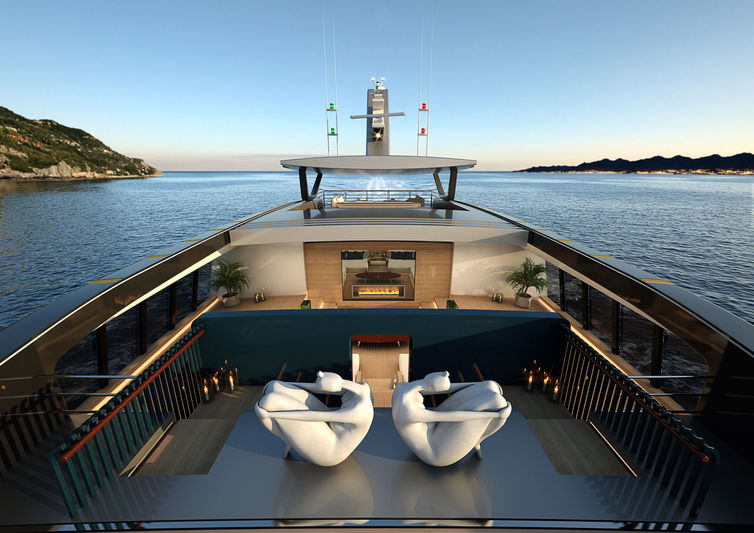 The engine room is amidships and to avoid noise and vibration from drive shafts passing under the guest accommodation, Pentagramma is designed to have diesel-electric propulsion with pod thrusters. Forward of the engine room is a spa area with hammam and massage room and a dedicated garage for a mini-sub.

Vallebona designed the Pentagramma concept principally for himself while waiting for an exclusivity agreement with Mondomarine to play out as the Italian shipyard slipped into bankruptcy. As such, he was free to explore alternative ideas and solutions that would have been harder to pursue had he been working for an individual client or shipyard. 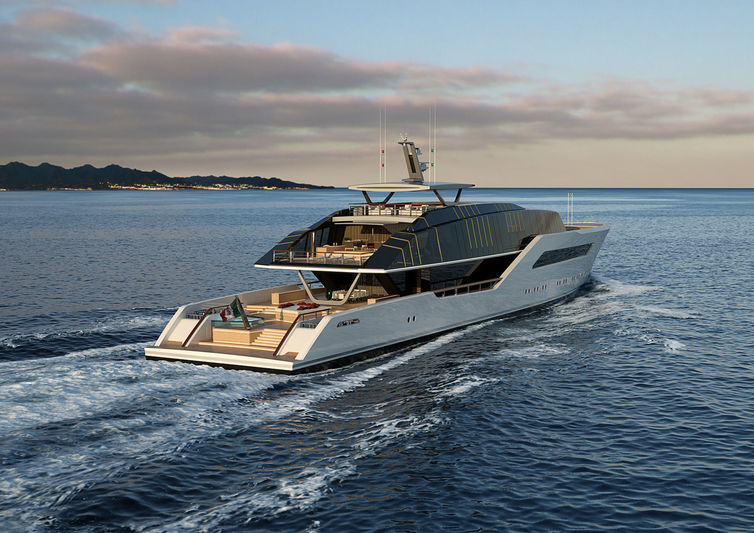 The result is a concept that is fresh and bold, exciting and dynamic but turns heads without resorting to the styling equivalent of shouting. Pentagramma is likely to appeal to the emerging younger generation of owners unimpressed by the lavish but largely conventional design solutions that have represented the superyacht lifestyle to date.