Following the recent launch of its latest 42-metre full-custom motor yacht Crowbridge in June, the Ancona-based shipyard Cantiere delle Marche has revealed its latest semi-custom superyacht design: the EXP42 concept. The EXP42 aims to provide the ideal balance between onboard comfort and technical reliability in her design, in order to take on the roughest of seas and be capable of venturing to the remotest of locations. 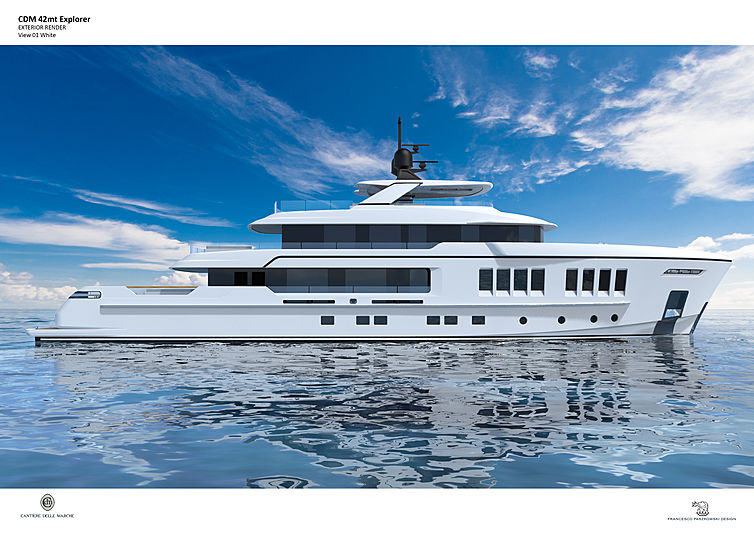 Photo: Cantiere delle MarcheDevised alongside repeat collaborator Francesco Paszkowski as part of a new semi-custom range from the yard (Paszkowski previously worked alongside the Italian yard on its MG line, of which three yachts have been sold and of which the MG 129 is due to be launched soon), this aims to meet the 'needs and expectations' of a 'vast and demanding clientele,' according to the builder. The EXP line will comprise of models between 310-499 GT, including approximately 460 GT for the 42.58-metre EXP 42. 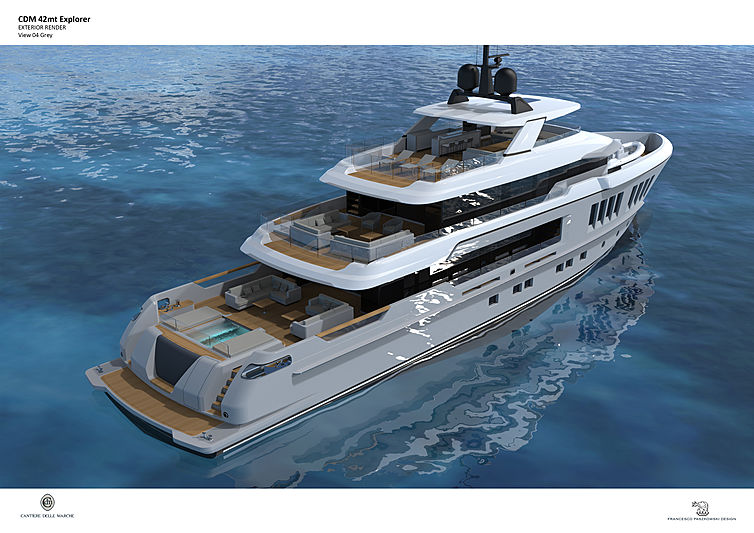 Photo: Cantiere delle MarcheThe EXP 42 concept has a displacement steel hull and light aluminium superstructure, with the design aiming to be a bold, imposing explorer vessel, whilst still displaying elegant lines. Paszkowski's exterior deck spaces are grand, aiming to offer guests maximum privacy for outdoor relaxation whilst still maintaining a feeling of openness and uninterrupted living. The vessel's interior can be customised to a high degree, according to the tastes of each owner. 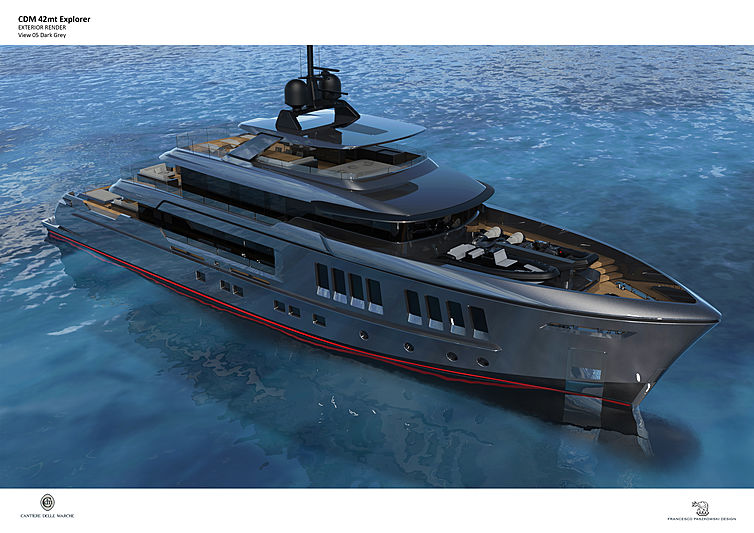 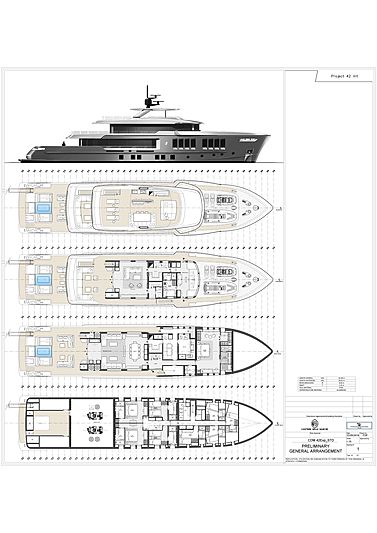 A more traditional layout is also possible, featuring a large owner's apartment on the main deck forward and four guest suites on the lower deck, with the galley located almost amidships on the main deck. The interior layout can be offered in various configurations, with either a salon and dining area located on the main deck or with a smaller salon on the main deck and the dining area on the upper deck. Furthermore, an owner looking for larger open deck areas can also opt for a version with extended deck overhangs. 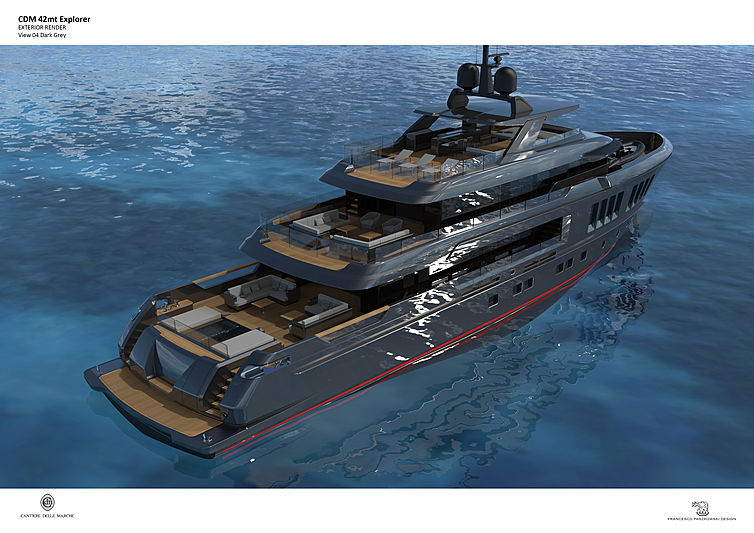 Photo: Cantiere delle Marche"An explorer yacht isn’t about its shape, it’s about its reliability, its range, its storage capacity and its ability to face any weather condition in comfort and safety,” commented Vasco Buonpensiere, CdM’s Sales and Marketing Director. He continued: “We build cool explorer yachts, period. With an explorer yacht and a contemporary design, you have the best of the two worlds: you can cruise around the world comfortably/safely and in style. On the contrary, with a white yacht dressed like an explorer yacht (like many we see, lately), you just have a white yacht and your cruising lifestyle doesn’t change at all….” 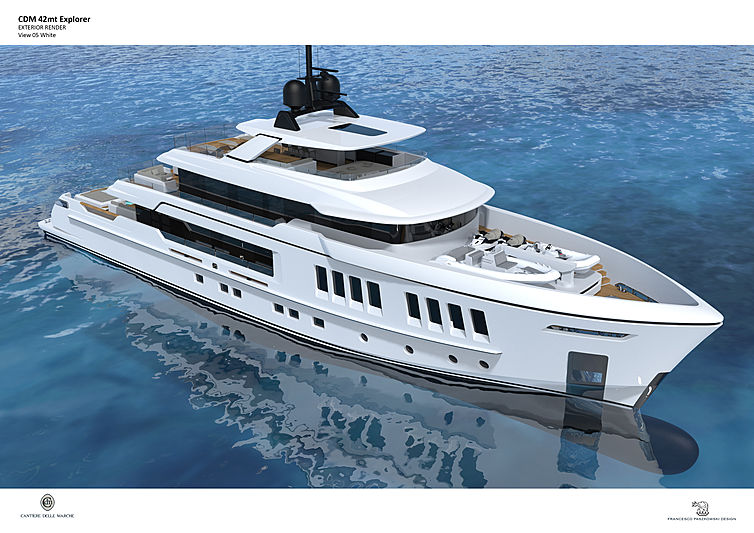 Photo: Cantiere delle MarcheFeatures of note on the EXP42 include her large cockpit with fold-down balconies and generous upper deck saloon. A bright and open space, the upper saloon is described as a "bright and airy veranda wrapped in glass surfaces" which enables the continuity between indoor and outdoor spaces and enhances the owner's connection to the sea. This quality is continued within the main saloon, thanks to the presence of oversized windows.

In addition, tenders and jet skis are located on the main deck forward but can be also stored on the upper deck stern terrace. In this latter configuration, a crane is hidden in a purposely designed carter on the sundeck to keep it out of sight once the tender has been launched. A large lazarette is available to host a variety of leisure/gym equipment and can be used according to the wishes of the vessel's owner. 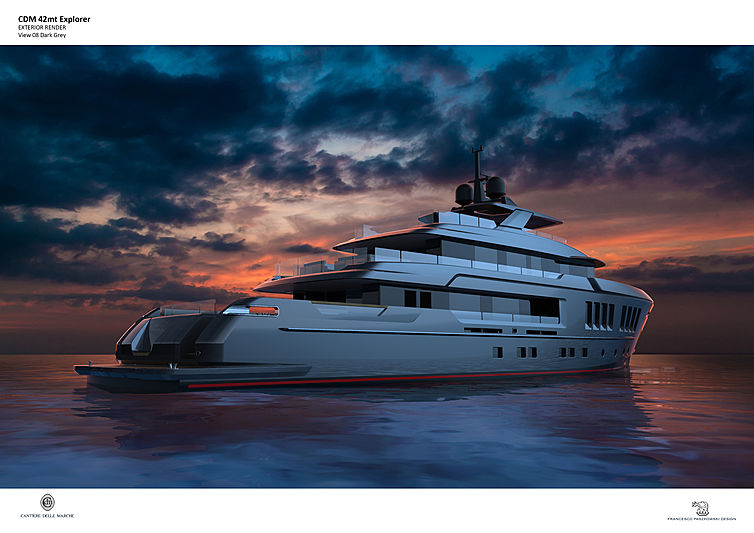 Photo: Cantiere delle MarcheIn terms of performance, twin Caterpillar C32 Acert and 60000-litre fuel tanks would allow the EXP42 to reach a top speed of 14 knots, with a range of 5000 nautical miles at 10 knots.