After completing an ambitious global circumnavigation journey last year that amounted to nearly 50,000 nm, the Damen-built expedition yacht Game Changer returned to the Netherlands in early 2020 for some much-needed downtime. Armed with a list of maintenance tasks and new ideas on how to further improve the vessel as a luxury explorer, Game Changer entered an intensive refit period at the Icon Yachts shipyard in Harlingen. 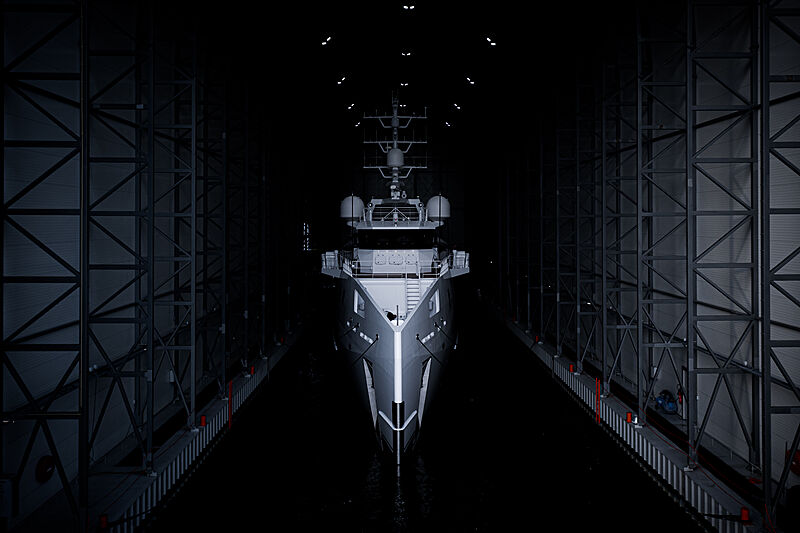 Over the next 10 months, virtually every corner of the boat was affected by the new upgrade which ranged from visible exterior cosmetic changes like the new paint scheme all the way down to skin-deep modifications including vibration and noise control. Project managed by the owner’s team, the project brought together the skills and talents of the yacht’s own crew with a team of industry-leading subcontractors. 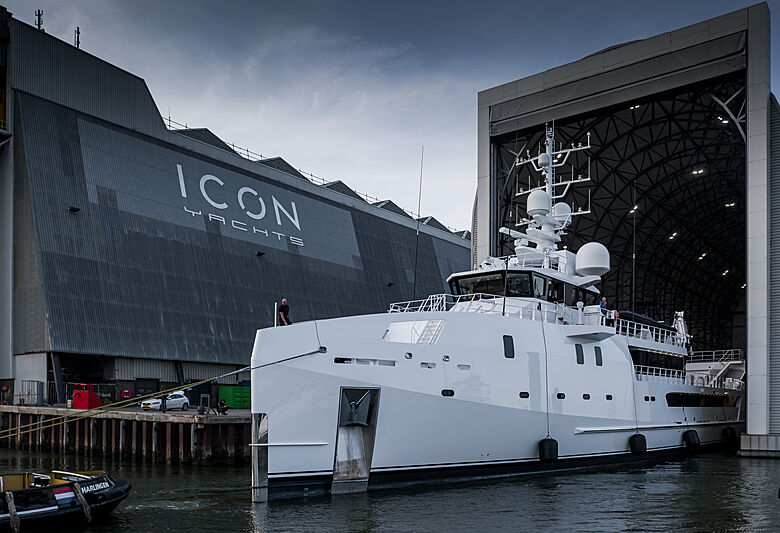 Making full use of the Icon Yachts  facilities, such as the 150m dry dock and 90m floating dock, the project team engaged all the subcontractors that carried out the works which were identified during Game Changer’s extensive travel program in just about every type of weather condition. “The original idea was always to use the boat and get a feel for it, only then could we have fully understood what we needed to adapt to give the owners exactly what they want,” explained Captain Mike Rouse.

The Game Changer we see today has come a long way from the first iteration which she was launched as back in 2017. Run with a continuously improving philosophy, the yacht has undergone several changes, most notably the addition of a new lounge and dining space on the tender deck in 2018 - a new structure custom-built for the yacht. 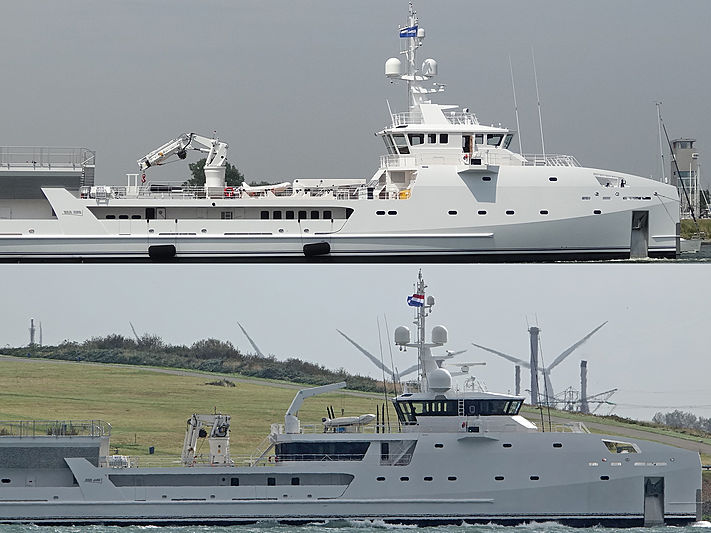 Operating as a stand-alone expedition yacht with a strong focus on diving operations, Game Changer and her crew used this latest shipyard period as an opportunity to streamline every operation out on deck as well as throughout the guest spaces inside. Appealing to adventurous charter guests, the first-hand knowledge gained from cruising around the world has now been invested in the overall guest experience on board. 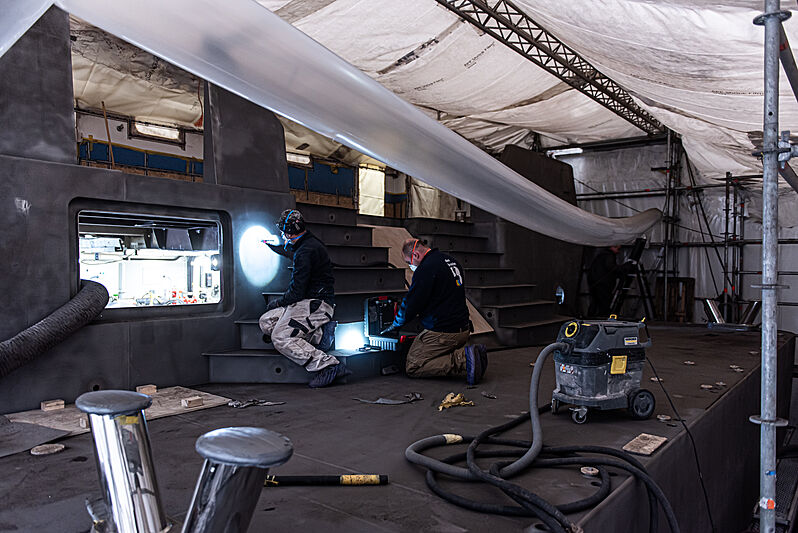 Game Changer's entire stern has been remodelled with an extension that includes a new swim platform, all executed by the steel experts at Talsma Shipyards. “Very early on we recognised the swim platform was too small," Rouse explained. "For a boat that is heavily dive-orientated, it just wasn’t the most practical space. Now, when we are diving with a group of 10 or 12 guests, we can have several people on the swim platform without it getting too cramped.” With this new addition, Game Changer's overall length was extended to 72 metres. 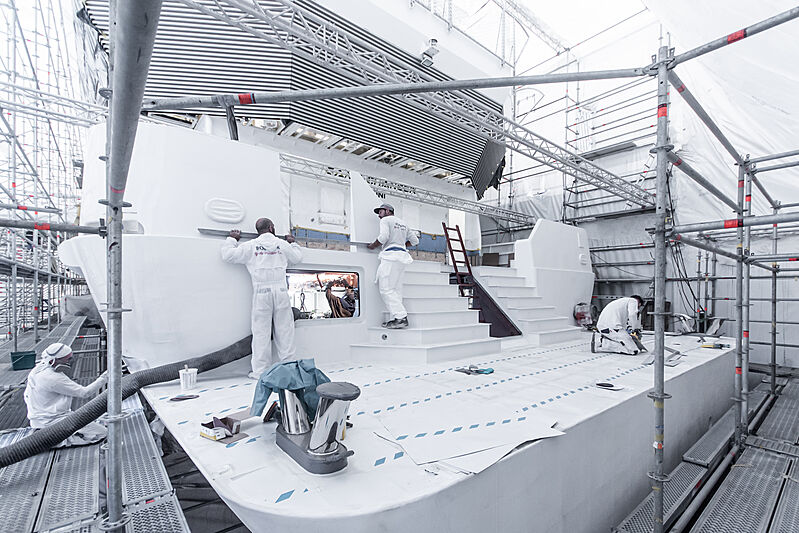 From the swim platform, access leads down into the inviting beach club area which is being optimised as a comprehensive toy store. The entire space is now heated for those chilly mornings in Antarctica, and a new Feebe passerelle has been installed here that gives the yacht even more mooring flexibility. 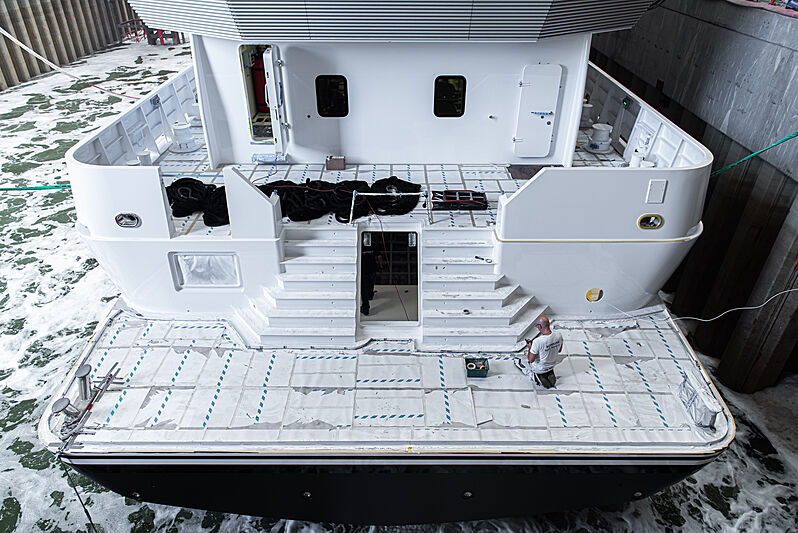 Another obvious exterior enhancement can be found on main deck where the inner superstructure is now finished in jet black, building on the same contrasting aesthetic as the wheelhouse and saloon structures. The separation this new paint scheme provides has Game Changer appearing as a larger yacht and shifts the visual focus to the fore and aft parts of the vessel while stainless steel covers on top of the rub rails add a touch of sophistication and protect the paintwork against any line chafing. 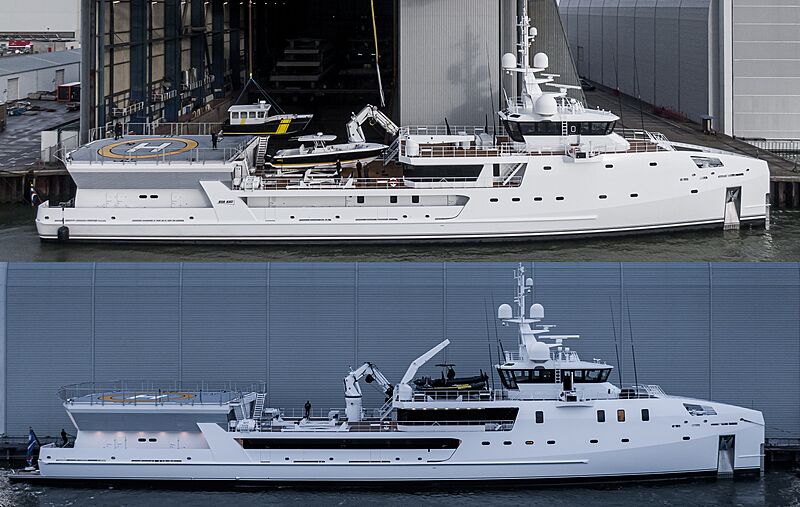 The customisation didn’t end there, and following requests from guests for more natural light in the cabins on the tender deck, the once letterbox-style portholes were enlarged and now drastically changes the atmosphere in the cabins. Game Changer worked with the same glass manufacturer which installed the original panes to keep a familiar look to the new design without compromising the build quality. 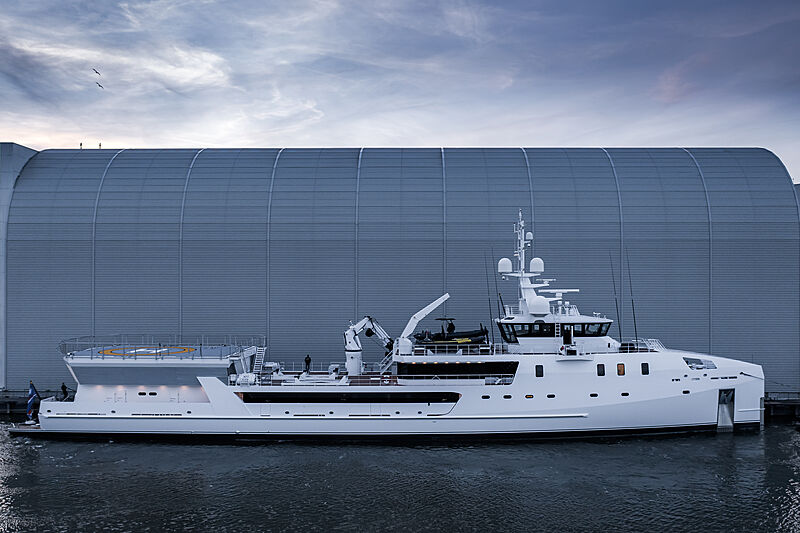 Not visible in these cabins is the new sound insulation measures hidden below the floorboards and behind the bulkheads. As a result of a new dynamic positioning system installed on board, these cabins had to be protected from the possible noise and vibration caused by the bow thrusters two levels below. “Intersona did a full noise and vibration analysis and identified the areas that can be focused on to suppress any disturbances from the thrusters.” Structural-born vibrations are mitigated through new dampened floorboards and insulating frames were installed over the windows, creating a more comfortable environment than ever before. A new interior theme throughout the yacht was realised by the interior masters at Struik & Hammerslag. 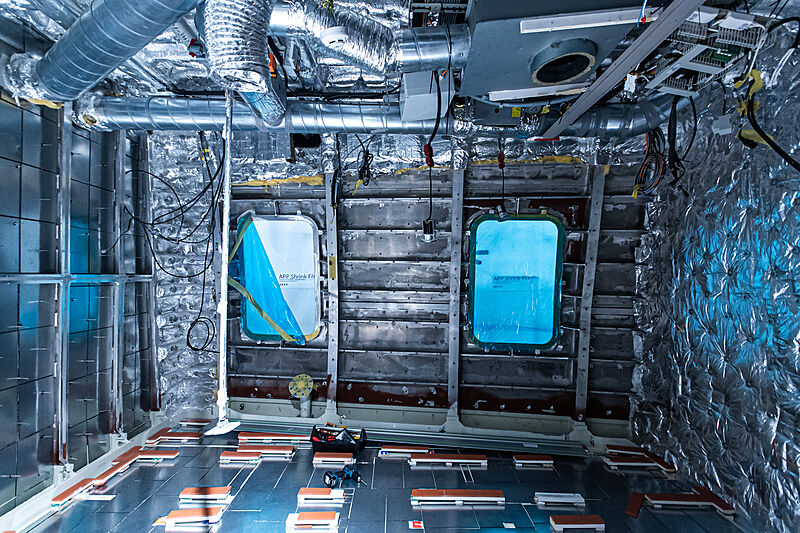 The operation of the dynamic positioning system was optimised on the Alphatron bridge through custom functions created by Praxis Automation Technology along with new joystick control for pin-point accuracy. A new air-injection system and a counter-rotating operation by Veth Propulsion further decrease any vibration caused by the two bow thrusters. Elsewhere underwater, new stabiliser fins were also installed which are expected to add to Game Changer’s seakeeping capabilities. “The once linked rudders were also split and now operate independently,” added Rouse. “This, together with a new trawling mode on the gearboxes means an already very manoeuvrable boat is now even easier to control." 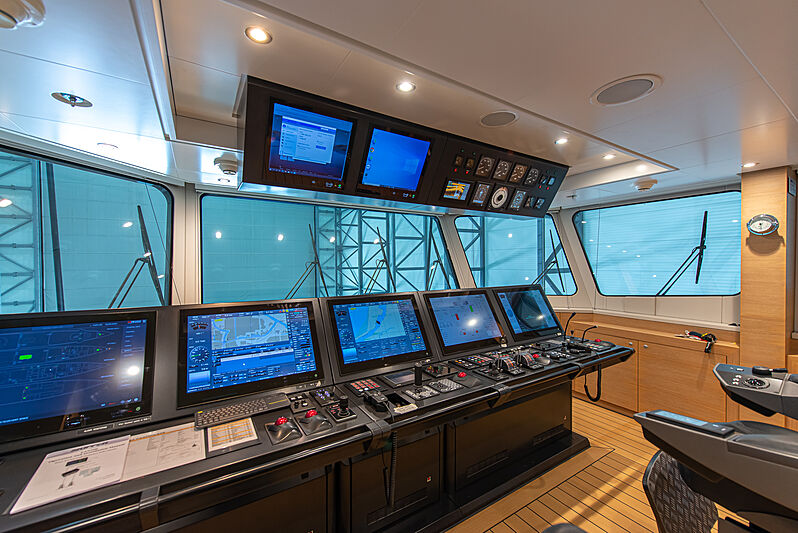 The yacht’s main crane was returned to Helia for a complete overhaul and was modified so as to reduce its operational lifting height. “By fitting a new block at the end of the crane, we saved a metre in the lifting height required to clear the deck,” says Rouse. This, in addition to new removable deck railings, make for more efficient and smoother operation.  “New load sensors added to the crane also give us better control over the stability of the vessel.” A new WASSP sonar was installed to support the custom U-Boat Worx submersible and its underwater operations that is rated to 1,140 metres below the surface. Photo: Tom van OossanenDespite the challenging times under which the project took place with travel and work restrictions to navigate, Game Changer emerged from her 10-month transformation in October looking as good as ever. Talking to her captain, it is clear that it came down to the facility and the professionalism of the subcontractors involved. “The Icon yard is an excellent facility and I think with the new management, it is moving forwards in a very positive direction. Geographically, the shipyard is surrounded by very strong Dutch and German subcontractors which are all involved in building some of the best yachts in the world, so that is a big benefit to any refit operation.” 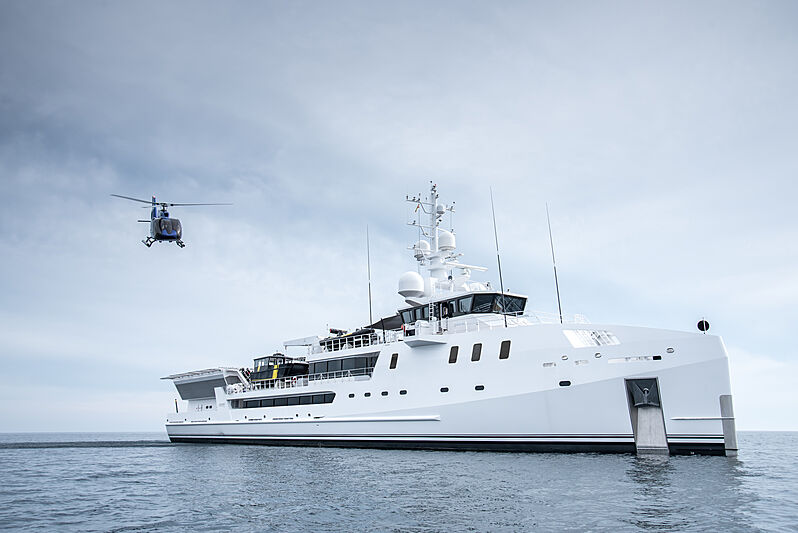 Game Changer’s own crew too were heavily involved in the project and could apply their own intimate knowledge of the boat to add to the future efficiency of the vessel. “A lot of pressure was also on the crew and they were involved in a lot of tasks that are not exactly common,” said their captain. “They have really stepped up and helped make the operation possible.” 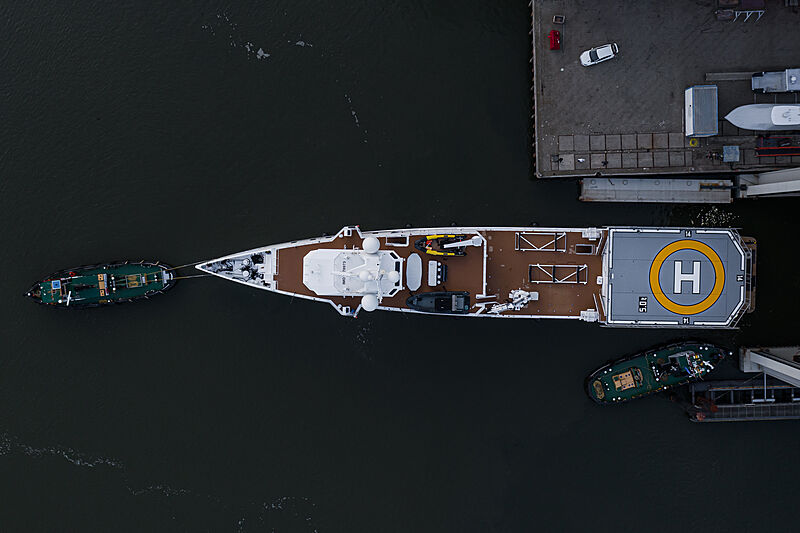 Photo: Tom van OossanenAnother aspect of the project’s success was the ability to document the entire process through photographer Tom van Oossanen’s creative eyes. “It has been a pleasure having Tom on board documenting every stage of the project,” said Rouse. “It has been so important to capture the changes that have been made over the years. Being able to keep the owners updated on the progress through professional material was fundamental, especially during this time of restricted travel.” 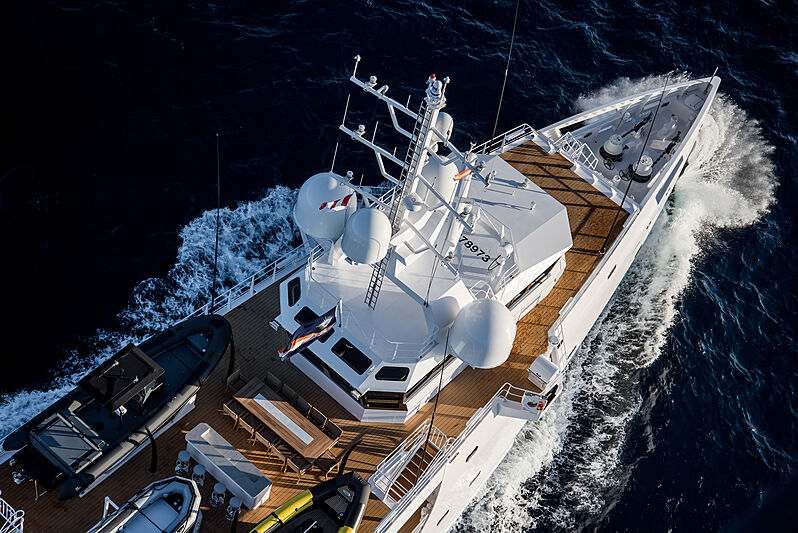 Up next for Game Changer is sea trial testing on the North Sea ahead of having all the new systems signed off, in time for her next and charter adventure with her charter CA Edmiston. Follow the Game Changer journey through their official Instagram account.

Travel around the world with 69m Game Changer