Even for a custom explorer yacht, Audace is an unusual vessel. She is the Ancona-based yard CdM's first full-custom project and based on a project by Andrea Pezzini of Floating Life (who also acted as the owner’s representative) in collaboration with Mauro Sculli and Sergio Cutolo for the naval architecture and engineering respectively. SuperYacht Times was recently invited to take a short cruise aboard Audace just prior to delivery to her owner. 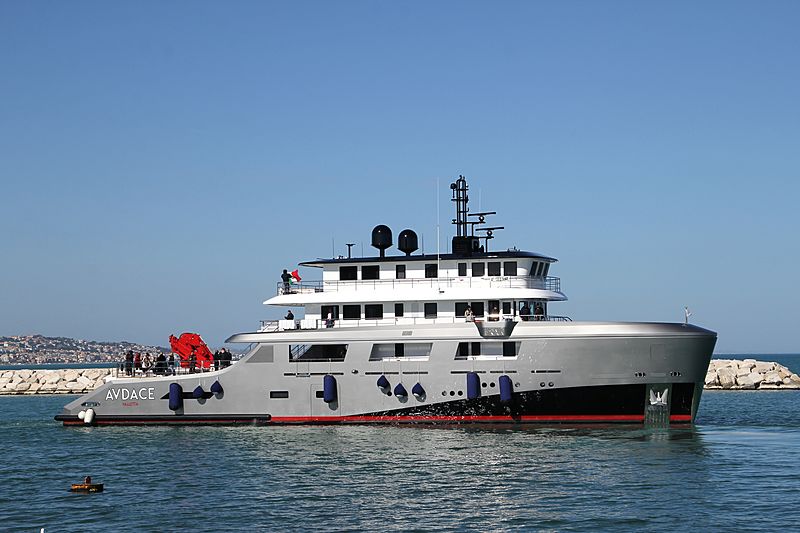 Photo: Merijn de Waard / SuperYacht TimesAt just under 500GT and spread over five deck levels (including an under-lower deck) she is very high volume for her overall length. The high bow and chunky superstructure may not be to everyone’s taste and her general arrangement is certainly unconventional, but once on board the owner’s reasoning behind the styling and layout becomes much clearer. 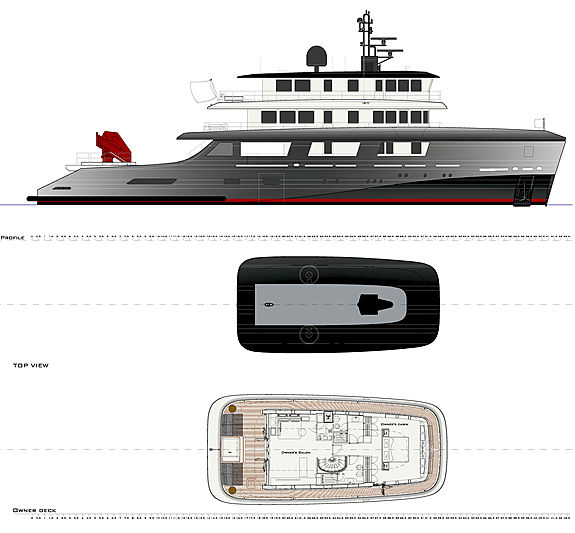 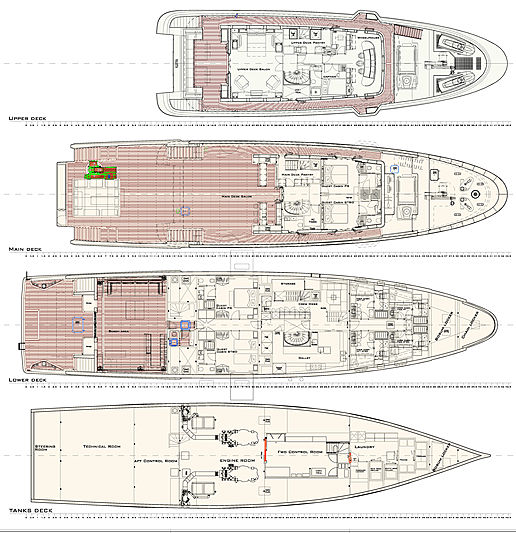 “I’m single with no children, I have time on my hands, and I’m fortunate enough to have some money in the bank,” Andrea Merloni, Audace’s straight-talking Italian owner, told SuperYacht Times last summer. “I want to make the most of life and this yacht is my way of doing that.”

Merloni, who plans to live year-round on board, had two principle requests in terms of design and layout. Firstly, he wanted a real explorer rather than a floating palace “full of marble and gold taps”; and secondly he wanted the entire top deck reserved for his own private use. 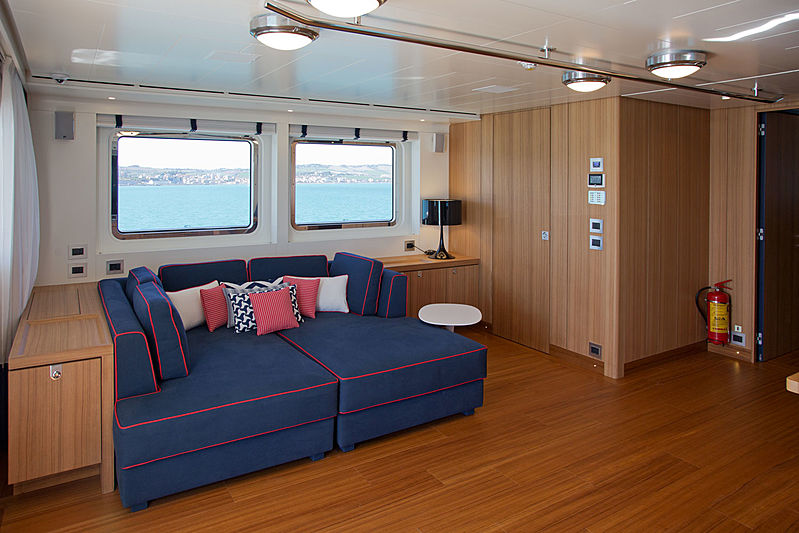 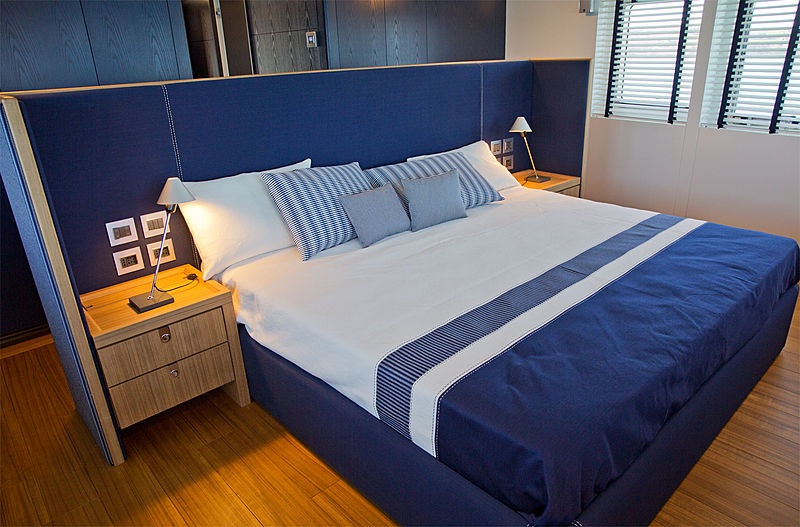 Photo: Justin RatcliffeIn fact, the owner’s deck can only be accessed by a private staircase with a security door at the foot of the stairs to prevent unauthorised access. 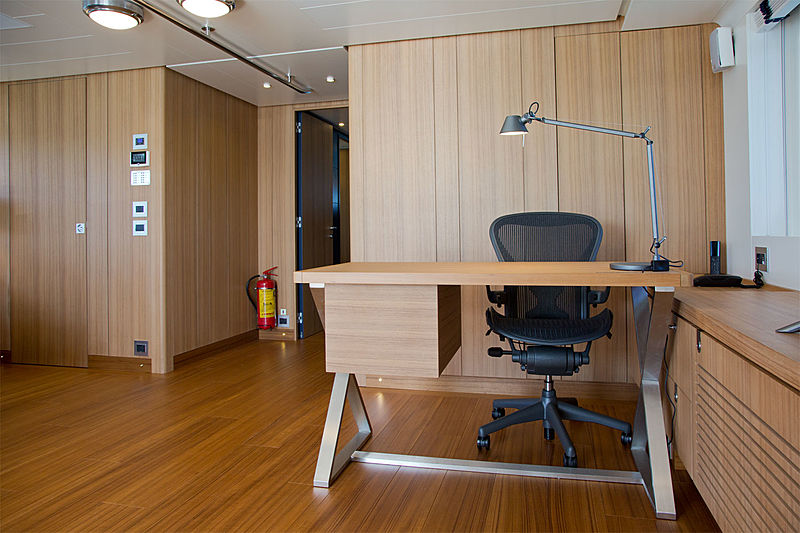 Photo: Justin RatcliffeThe cabin itself with double bathroom is located forward, and there is a small galley connected to the pantry so he doesn’t always have to rely on crew service. Aft of the staircase is a living area with comfy loungers and a giant flat-screen TV. With walk-around side decks, there is a Jacuzzi on the open aft deck. 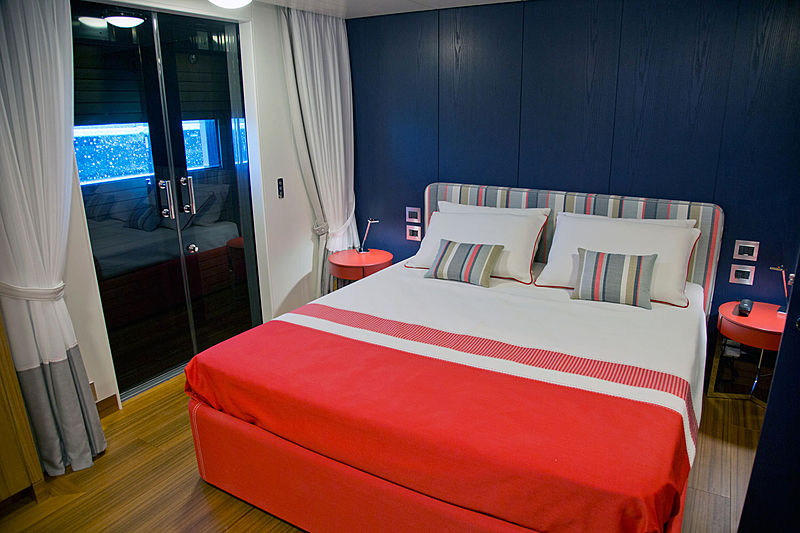 Photo: Justin RatcliffeThe upper deck wheelhouse has a Böning/Furuno integrated bridge system and an island console so crew on watch can get up close to the windshield, and there is also a Portuguese bridge. Behind the captain’s cabin, the rest of the deck is taken up with a cosy guest salon that can also be used as a cinema/media room overlooking the stern terrace.

Half the length of the main deck is taken up by the open and semi-open aft deck. The open deck will carry a 10-metre custom tender being built by the owner when not in use or being towed and is deployed using an 8.9-tonne capacity crane that the owner specifically asked to be painted Ferrari red. 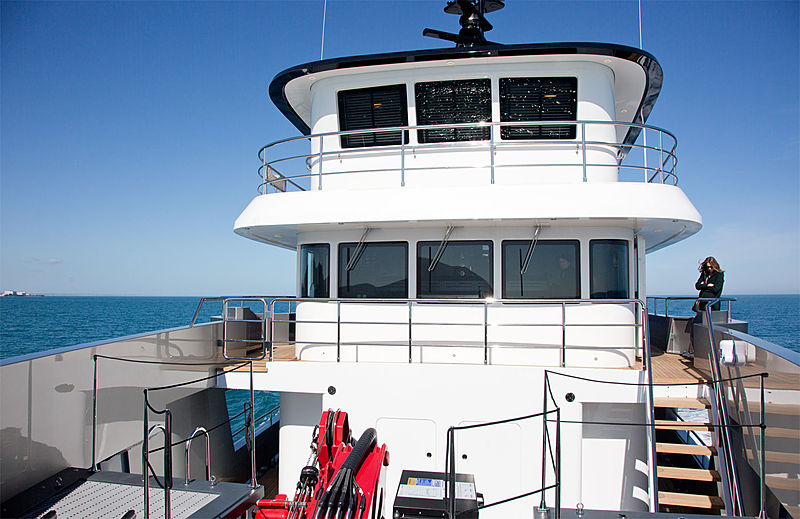 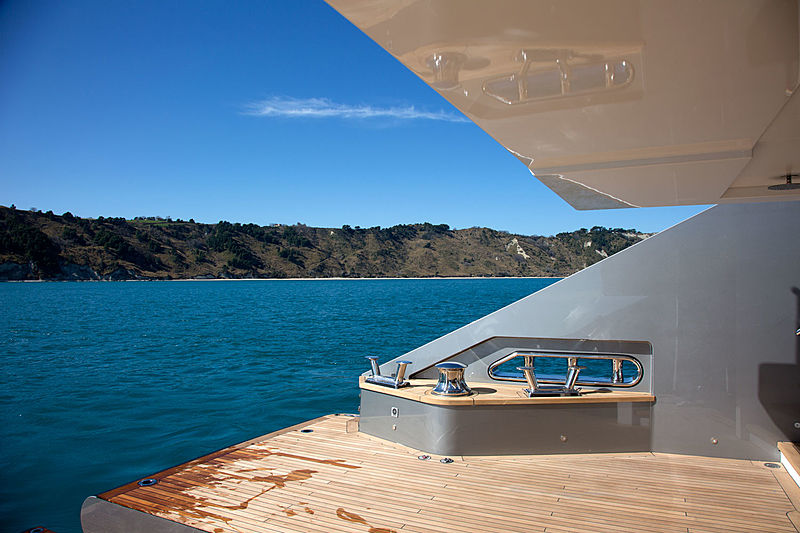 Photo: Justin RatcliffeA similar but smaller crane in the bow is used to launch a customised land Rover Defender (yet to be delivered), a BMW GS 1200 off-road motorbike, a Jet Ski and the crew tender. Interestingly, the mezzanine deck in the bow is made of lightweight composites so it can be easily removed during loading operations.

The owner did not want a formal salon on the main deck that would never be used. Instead, there is semi-enclosed, multifunctional space with a DJ station for partying and a TV screen that lowers from the ceiling and swivels 360°. Inside are two guest cabins with double doors that open onto the side decks. 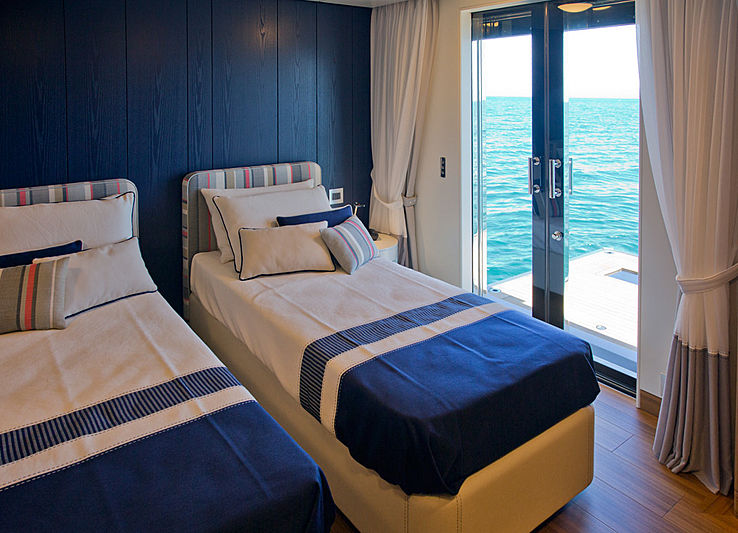 Photo: Justin RatcliffeThe lower deck aft is taken up by another multifunctional space that serves as a beach club or disco equipped with a sophisticated DJ and audio-visual system (the walls and ceiling are clad with extra-thick insulation to ensure all the sound stays inside the disco when in port). Amidships are two VIP suites with private fold-down balconies. The pro-spec galley fitted out by Marrone is enormous and can prepare food for up to 250 guests at a time. There is very comfortable and spacious accommodation for eight crew forward.

“Another priority for me was the crew quarters,” says the owner. “As a live-aboard owner I spend more time with my crew than with my guests and – believe me – if they’re not happy, neither am I.” 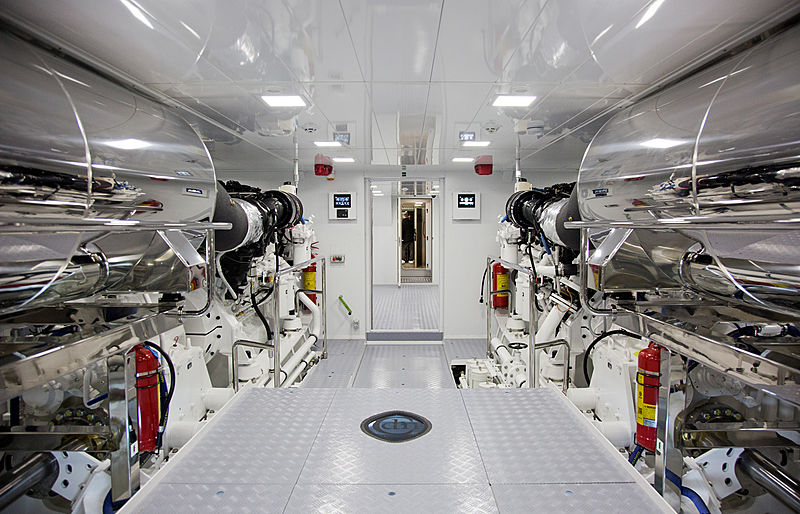 Photo: Justin RatcliffeThe under lower deck, highly unusual for this size of vessel, runs the length of the yacht. It is divided into various compartments comprising an aft control room, engine room, forward control room, laundry, refrigerated garbage room and cold storage. All the technical equipment, from valves and pumps to switchboards and stabilisers, is easy to access for maintenance and Audace is able to cruise for weeks on end without re-provisioning or re-fueling (powered by twin CAT C32 Acert engines, at an economical 10 knots the explorer yacht has a range of 5,400nm) 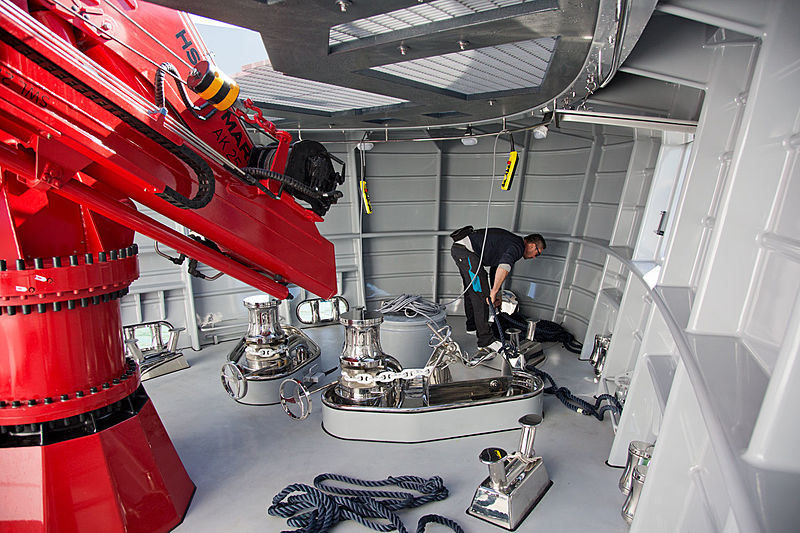 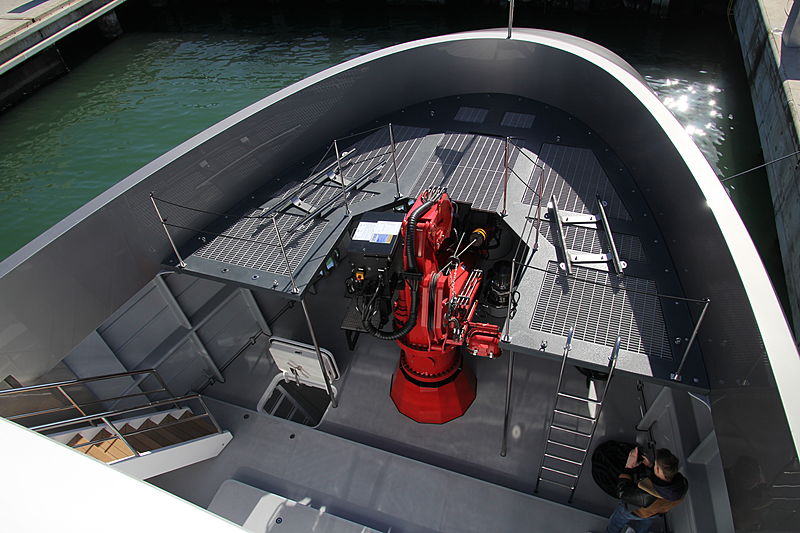 Photo: Merijn de Waard / SuperYacht TimesSpartan by superyacht standards, the simple yet crisp interior decor is based throughout on teak joinery, blue-painted wood wall panels with matching soft furnishings, and Corian wet surfaces in the bathrooms. The owner resisted any attempt to add cosmetic frills and there is no marble or other exotic materials on board. The beds and lounge sofas are bespoke, but other free-standing furniture units are standard models supplied by top Made-in-Italy brands such as Baxter, B&B, Paola Lenti and Tribù. 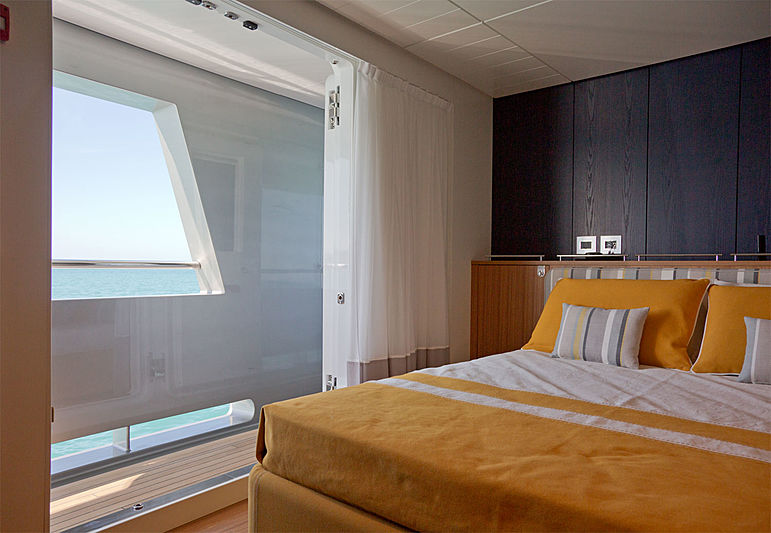 Photo: Justin Ratcliffe“I’m especially proud of the technical spaces aboard Audace, which make best possible use of the available volume and show what we’re capable of when presented with a challenging, one-off brief,” says Ennio Cecchini, co-founder and CEO of CdM. “She is what she seems: a seaworthy explorer designed to be lived on with styling, engineering and a layout to match.” 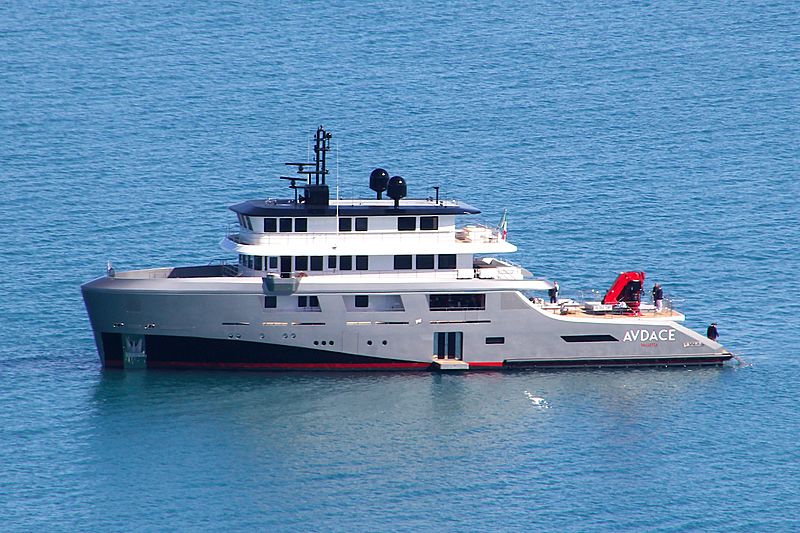