Sea Independent informs us they are now the central agents for the sale of explorer yacht Zeewoelf, a yacht with an unorthodox but exciting history. Originally built in 1960 as a North Sea fishing cutter, Zeewoelf turned the tides in the 1980s and became a guard vessel for various oilrigs and eventually ended up in St. Vincent in the 1990s where she underwent a thrilling metamorphosis from being a fishing and security enforcement cutter to a luxurious explorer yacht. 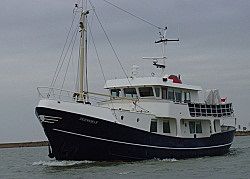 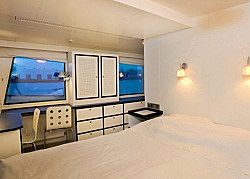 In 2002, Zeewoelf, completely renovated and modernized including the most state of the art navigational systems, was set again to sea as an internationally seaworthy vessel. Zeewoelf is an aesthetically designed vessel with a distinct classical cutter form. Complete with teak finishing and exceptional amenities – including a rear deck for your car- this ship is the ultimate yacht for a world cruise.