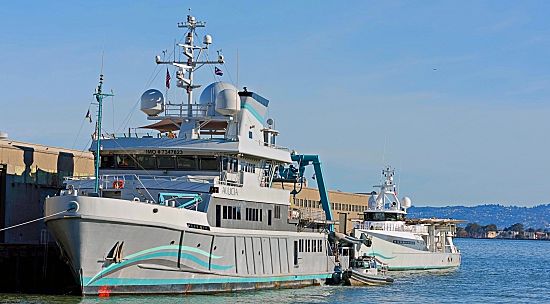 It is not often that the two strictly-functional and expedition-ready yachts Alucia and Umbra make a public appearance as seen here in San Francisco. Likely because these yachts, owned by the same owner, spend most of their time exploring the depths of the Pacific Ocean or anchored off some remote island.

The 56 metre explorer vessel Alucia underwent a full 12-month refit last year in New Zealand where she had a new engine exhaust purification system installed and maintenance and upgrade of her submarine and dive control systems. These upgrades were necessary for the 40 year old vessel to retain her SOLAS standards and stay in survey to continue her mission as a no-nonsense world explorer.

Her much younger and slightly smaller cruising companion, Umbra, started life as a fast support Sea Axe vessel built by Dutch shipyard Damen in 2010. She too was refitted by Diverse projects and released from the Oceania Marine shipyard in New Zealand in March this year with the addition of a removable helicopter pad. Shortly after she made news earlier in the year when she joined superyacht Dragonfly in Vanuatu to assist in relief efforts in aid of stricken communities on the island following a devastating cyclone that hit the region.