Although discussions continue as to what exactly constitutes an explorer yacht, there remains a category of yachts whose exploration credentials are undisputed. Many of the early yacht conversions started life as rugged utility vessels, and have been transformed into true explorer yachts in every sense of the word. Here, we pay homage to two iconic groups of these fascinating early conversions: three German tugs and four Dutch pilot cutters.

A number of large salvage tugs were built for the towage company Bugsier GmbH & Co. KG from Hamburg, Germany between the early 1960s and the mid-1970s. These tugs had plenty of towing power and ice-breaking capabilities, so it should come as no surprise that three tugs ended up being converted into explorer yachts in the 1990s: Arctic and her slightly smaller sister ships Simson and Atlantic. Although we will mainly focus on the conversions of Arctic and Simson, it is interesting to note that Atlantic was converted into a yacht support ship for a Middle Eastern ruler and renamed Khozam.

Photo: Holger JaschobCompleted in 1969, the very powerful 87-metre Arctic and her sister were the flagships of the Bugsier fleet for many years. In the early 1990s, however, Bugsier divested of all but one of its large salvage tugs. Arctic was sold to a Dublin-based investment firm in 1993 and renamed Arctic Research. Soon after, in 1994, she was sold to an Australian owner - whose family still own the yacht today - and sent to Malta Drydocks for an extensive conversion. Kusch Yachts presided over the conversion and redesigned the exterior, while C. Kidston and A. Sassoon designed the new interiors.
While her conversion was extensive, the yacht retained her distinctive exterior features. She re-emerged in 1994 as Arctic P, a name which she has kept to this day. Accommodating 12 guests and a crew of 25, a range of 20,000 nm and fuel capacity of 1.4 million litres, qualifies her for explorer status. 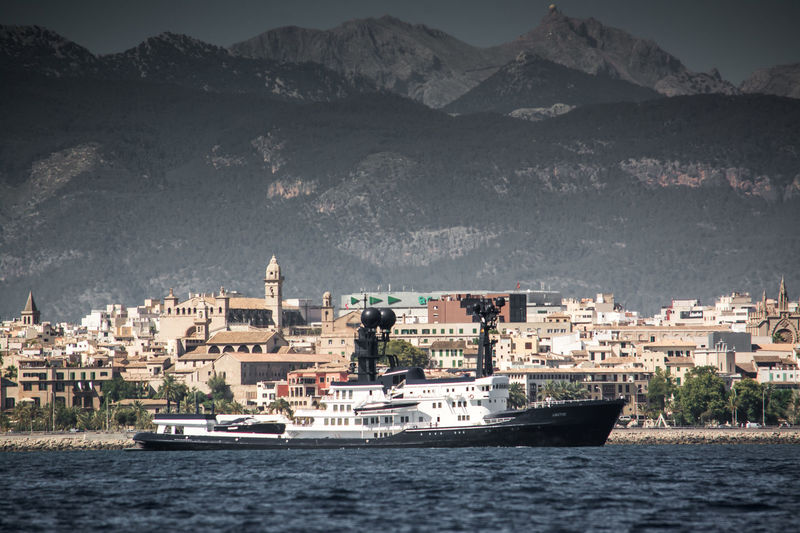 The Simson was sold in 1994, to famous French owner Jack Setton, known for his taste for unusual yachts. He renamed her Simson S. and like her fleet mate Arctic P, she went to Malta for conversion into a yacht under the supervision of Kusch Yachts. She emerged from the rebuild in 1995. Like Arctic P, she retained most of her original exterior design after the rebuild, while sporting a completely new interior by Heinz Voller. Setton sold her in 1997, and her new owner, the late Peter Lewis, renamed her Lone Ranger while putting her through another extensive refit in Miami. Lewis literally took her all over the world, including Antarctica in 2005. In 2009, Lewis gifted the Lone Ranger to an ocean research charity before being sold at auction in Antibes in 2013. Under her new name Sea Ranger, she proceeded to Romania for a refit. She re-emerged briefly in the Mediterranean in 2014 before heading to Romania again. In 2018, she reappeared off the South of France, looking as good as ever. 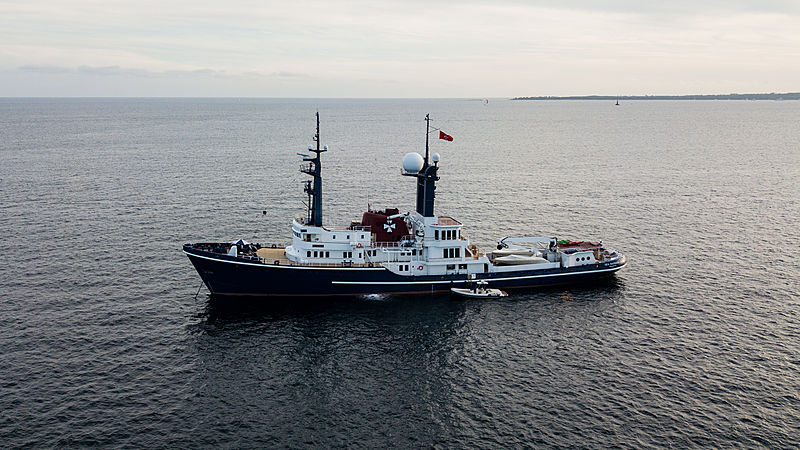 The Dutch ship pilot service previously owned a significant number of pilot cutters, which are floating pilot bases. Despite their elegant looks, the cutters were tough vessels, able to stay out on station during the most punishing gales the North Sea could throw at them. During the 1980s and 1990s, the pilot service sold many of these cutters. Enterprising yacht owners quickly saw opportunities to create unique yachts out of four of these vessels: Capella, Spica, Altair and Fomalhaut, which we now know as Capella C, Intuition II, Altair III and Akula respectively.

Capella C was a bit older than the other pilot cutters, as she was completed in 1968 by the Gebroeders Pot yard in Bolnes, near Rotterdam. In 1985 she was sold to an Australian owner who converted her into a yacht, based in Monaco. She was now able to accommodate 22 guests across 12 cabins, as well as a crew of 17. Externally, she remained largely unchanged, except for being painted all white. She underwent several refits over the years, the latest taking place in 2008. In 2014, she was sold to an unknown owner, believed to be based in Britain. Most recently, she has been out and about in Scandinavia.

Before Amels delivered its first new build yacht in 1982, the yard built cargo and utility vessels, including a series of three pilot cutters for a division of the Dutch Ministry of Defence. The first of the cutters from Amels was Spica, delivered in 1973. 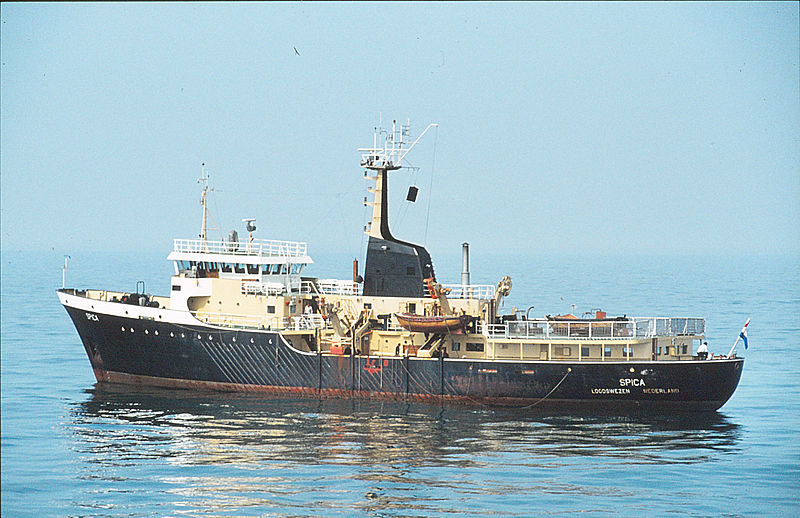 Photo: Jan MelchersShe was sold in September 1997 to an American owner and dispatched to Southampton, Britain, to be rebuilt into a superyacht by Vosper Thornycroft and Southampton Yacht Services. She underwent a complete metamorphosis leaving few clues about her previous identity apart from her sturdy hull. Indart signed for the exterior redesign, while Southampton Yacht Services together with Nicholson Interiors drew up a completely new interior providing ample room for 14 guests and 14 crew members. The rebuild was completed in 1998 and Intuition II, as she was now named, spent a lot of time in the USA, the Caribbean and the Mediterranean until she was sold in August 2017 to an unknown owner. 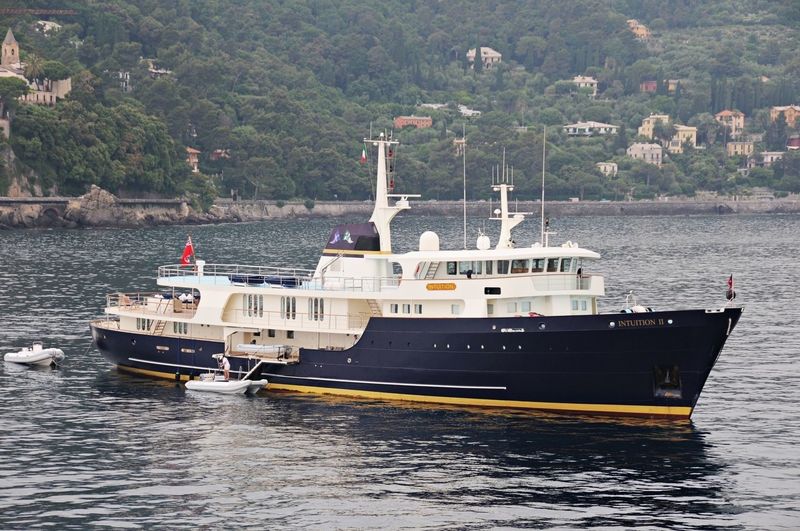 Amels delivered the next pilot cutter, Altair, in 1974. She was sold in 1995 after 21 years of service to a Dutch private owner, who chartered her out to Greenpeace that summer for an eventful campaign against nuclear testing. The campaign had a dramatic ending when she was raided by French commandos in the Italian port of Brindisi in October 1995. Altair then set course for a different future. In 1996, she was sold to an American owner, who sent her to the Oceanfast yard in Australia to be completely rebuilt. With a new exterior and interior design by the late Jon Bannenberg, she is arguably the most heavily converted yacht mentioned in this feature. When her next owner bought her in 2000, he put her through another refit at the Arredamenti Porto yard in Genoa, which she visited again in 2003, following a further sale. This time, her bridge deck was lengthened under the supervision of Australian designer, Sam Sorgiovanni. She has remained with the same owner since 2003 and has been cruising the Mediterranean under the name Altair III. 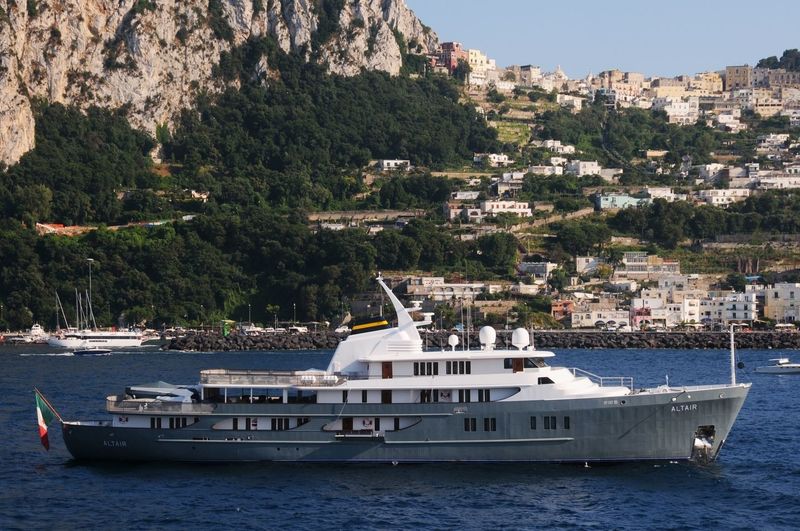 The last of the three pilot cutters by Amels was the Fomalhaut, delivered in 1974 as yard number 335. She was initially sold in 1997 and renamed Princess Laya. In 1998, she also visited Vosper Thornycroft for a rebuild. Naval architects BMT Nigel Gee provided all naval architecture and structural design for the conversion. 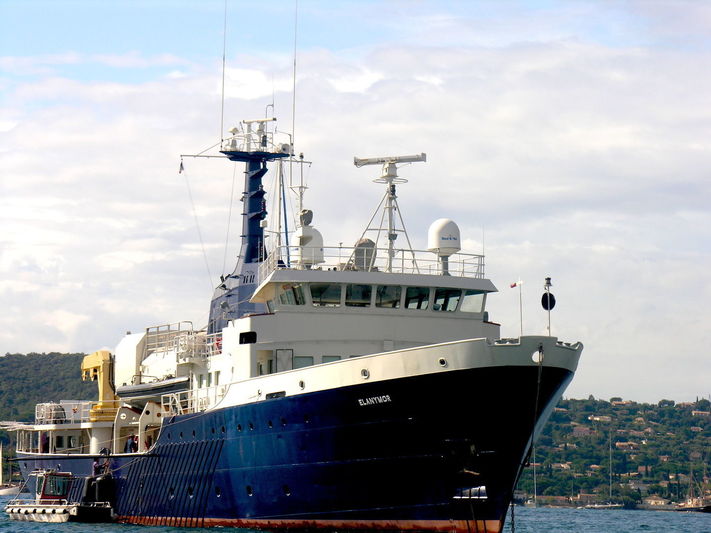 Photo: Benoit DonneShe emerged in 1999 as the Elanymor, now sporting a flight deck and helicopter hangar, amongst other changes. In 2008, she was sold on, renamed Akula and subjected to a partial interior and extensive exterior refit at H2X in La Ciotat. In 2010, her engines and generators were overhauled in Malta. Although she has been on the market now for a while, she is being kept in perfect condition. 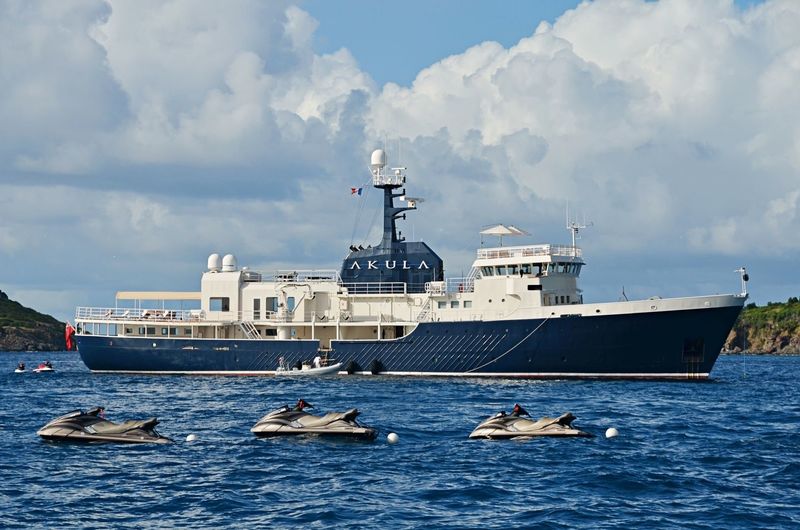 All of these seven tugs and pilot cutters were converted into yachts over 20 years ago, yet almost all of them are still highly active and in mint condition: a testimony to the quality of their original build, their smart conversions and loving owners. Most of them are travelling around the world, so be on the lookout!