Home > News > On board: the 50m Feadship Broadwater

With so many yachts to see at this year’s Palm Beach International Boat Show, SuperYacht Times steps on board the award-winning 50.28-metre Feadship yacht Broadwater to find out for ourselves what has made this Dutch-built vessel such a talking point following her major refit in 2017. 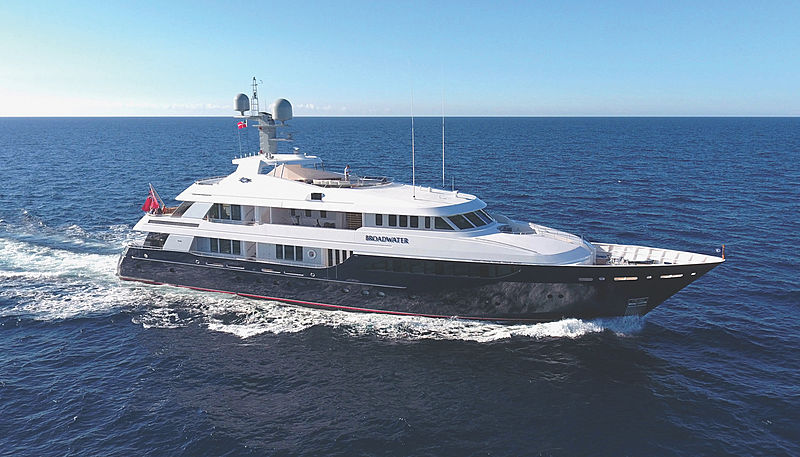 Photo: Mark Patterson, Uneek and Alexis AndrewsOriginally known as Blue Moon and renamed Sweet Pea and Deja Vu later on in life, Broadwater was built in 2000 for a highly experienced owner and yachtsman, with veteran superyacht designer Donald Starkey responsible for both the exterior and interior design of the vessel during the original build. It was in 2017 when she underwent her eight-month, all-encompassing refit which took place at the Lauderdale Marine Center in Fort Lauderdale, Florida and for which she won the accolade of the best-refitted yacht at the 2018 World Superyacht Awards. 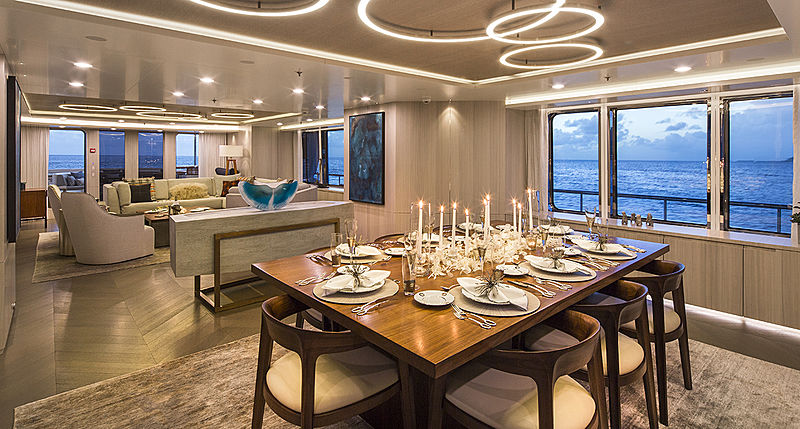 As part of the refit, an entirely new interior designed by the Young Designer of the Year award winner, Adam Voorhees, 2010, was installed. As well as the addition of a sixth stateroom, the extensive upgrades to the vessel’s layout included the creation of a dining/living space aft of the bridge, the installation of an exterior gym and spa and the addition of a beach club in her stern.

Most noticeably of all, Broadwater also received a full exterior repaint, changing her hull colour from white to blue: a change which, as the judges at the World Superyacht Awards noted, has given the motor yacht a cleaner and more sophisticated appearance. 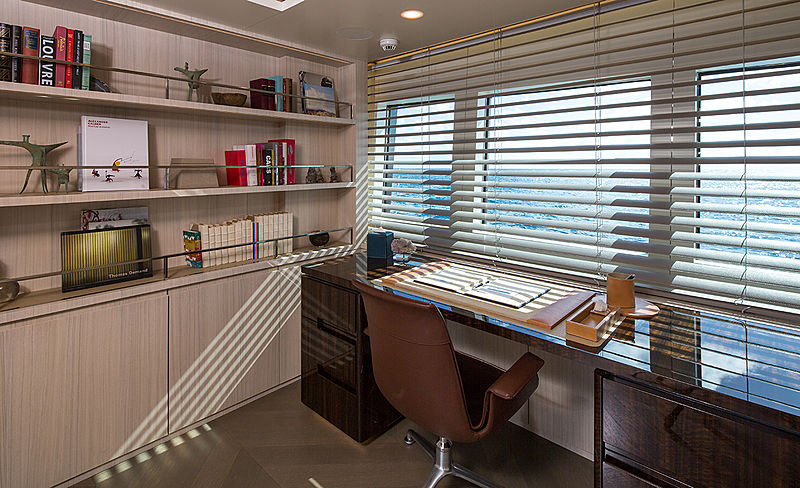 Stepping on board, the rejuvenating effects of the refit quickly become apparent. Adam Voorhees’ interior offers a calm, casual and inviting atmosphere, with a minimalistic composition and subtle design details revealed throughout the vessel. Thanks to the removal of the original ‘Flume Tank’ passive anti-roll system, the refit released internal volume that was reassigned to storage space, and, indeed, a sense of breathing space is key to the 50.28-metre superyacht. 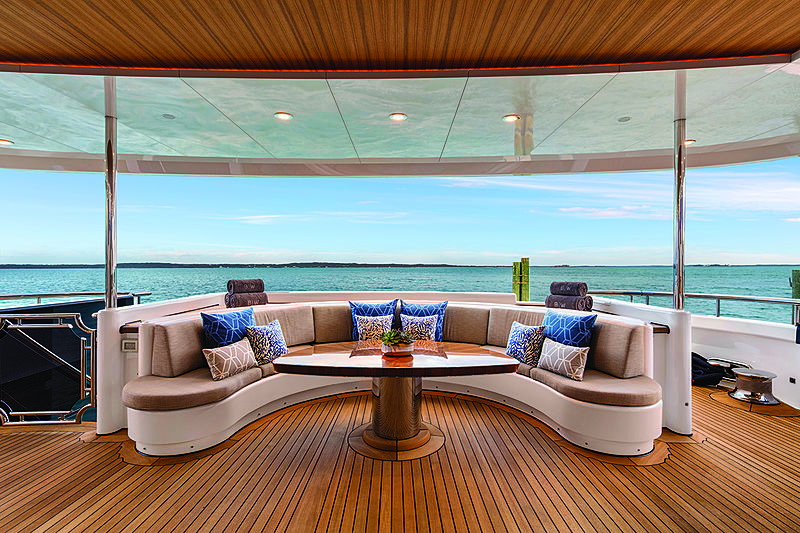 The sixth stateroom - a VIP queen cabin on the main deck - provides between 12-14 guests comfortable accommodation on board Broadwater. A spiral staircase leads down to the four large ensuite lower guest cabins which feature distinctive metal finishes manufactured by Neal Feay and inspired by the Japanese practice, of omikuji (Japanese fortune telling paper strips that can be found at shrines and temples), creating multiple layers of reflection, transparency and gradient colouring. 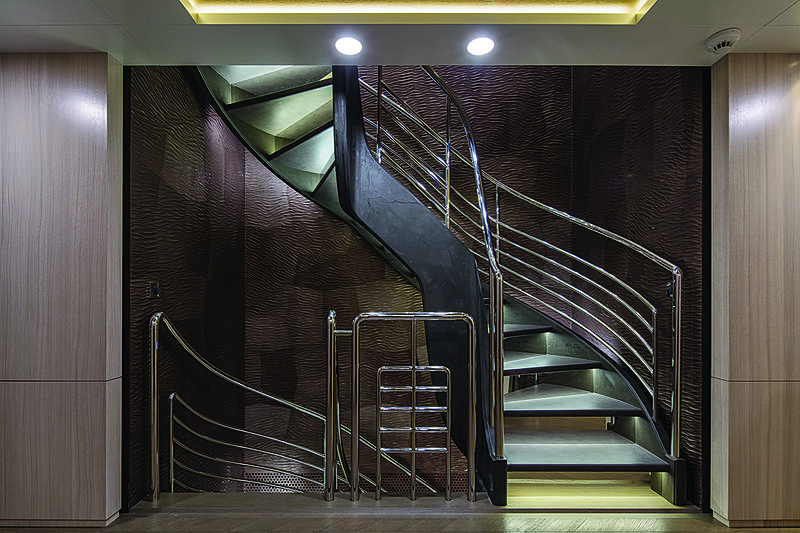 The four well-appointed guest staterooms on the lower deck feature king berths, two of which convert to twins and which also feature the option of additional Pullman berths (two in total). All of the staterooms have been refitted with new millwork, soft goods and stone. From the entrance foyer area, you can easily access the formal dining and main salon area, where a custom dining table for 12 and a new 275-bottle glass front display wine cooler can be found. 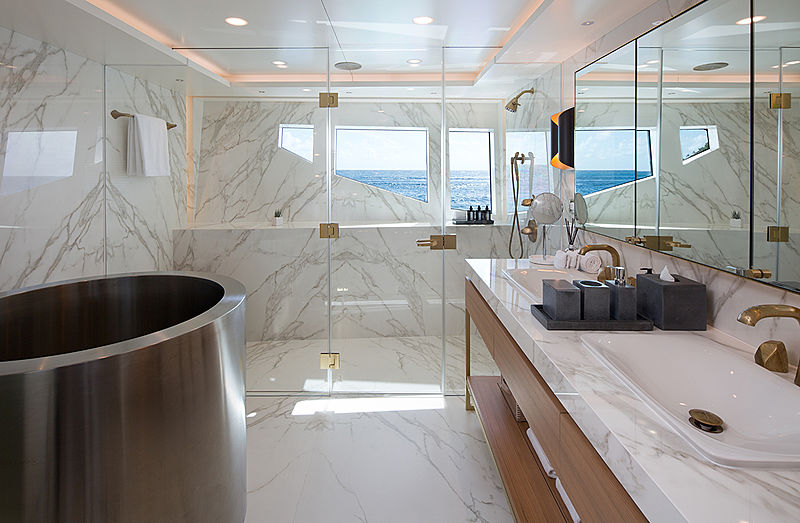 The tranquil main saloon features chevron pattern rift sawn oak flooring with sumptuous area rugs, as well as a modified L-shaped sofa, coffee table and two custom swivel chairs, along with an additional low credenza and accent chairs. The main-deck master suite is located forward and is full-beam with a king berth, large walk-in closet, generous storage and a private office with the additional queen cabin located to starboard. 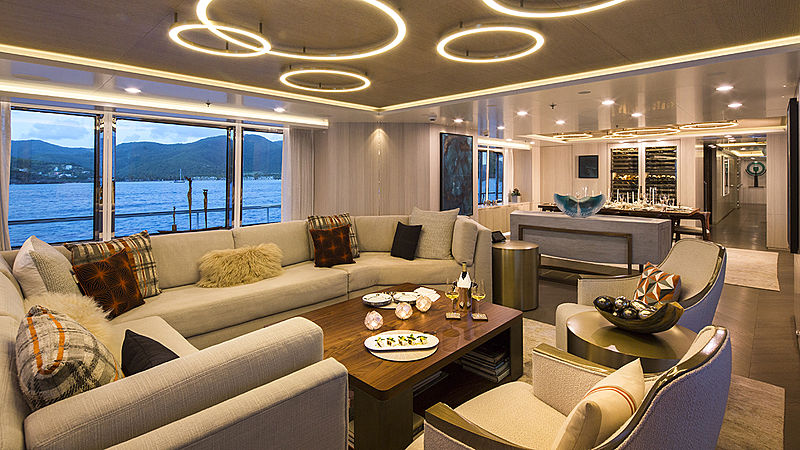 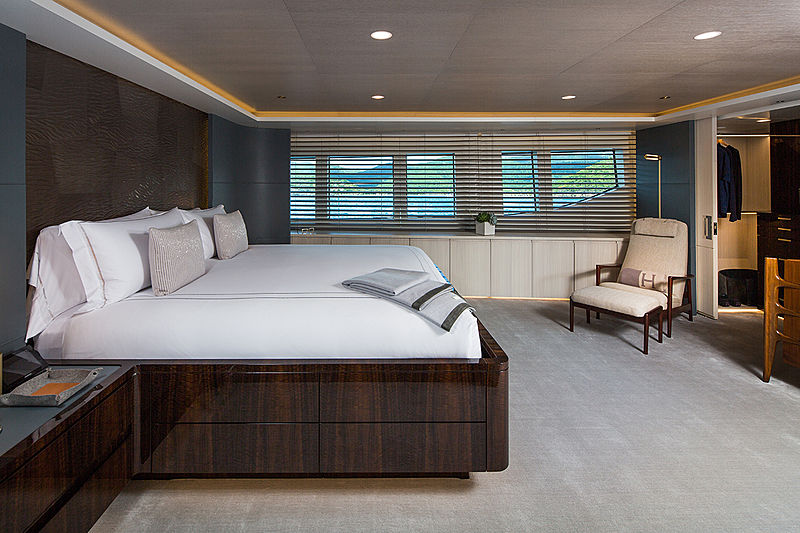 Aft, there is the playfully-designed circular skylounge designed for relaxing and entertaining, which is tastefully furnished with a Vladimir Kagan-designed semicircular sofa, a Finn Juhl coffee table and chairs, as well as a standalone table with four Hans Wegner chairs. 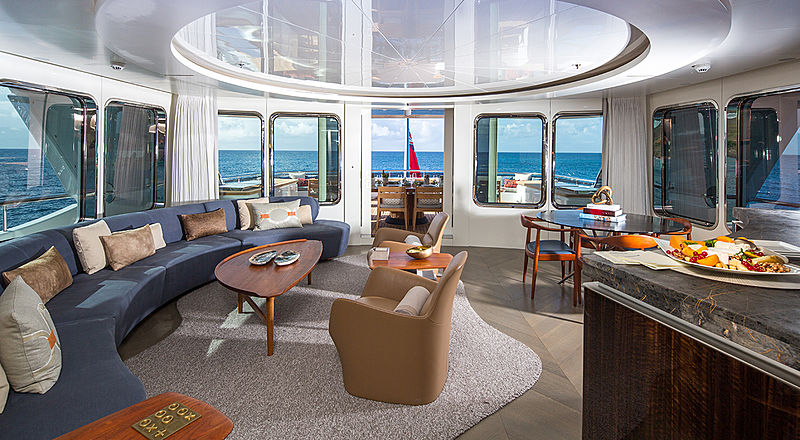 From here, it is simply a case of using the external stairway on the starboard side deck to reach Broadwater’s sundeck, where you can find a built-in settee, loose furniture and table aft, a circular settee with table to port and further forward to port, a wet bar. As one of the boat’s standout features, a large Jacuzzi with ample sunpad area is in the middle of the sundeck forward. 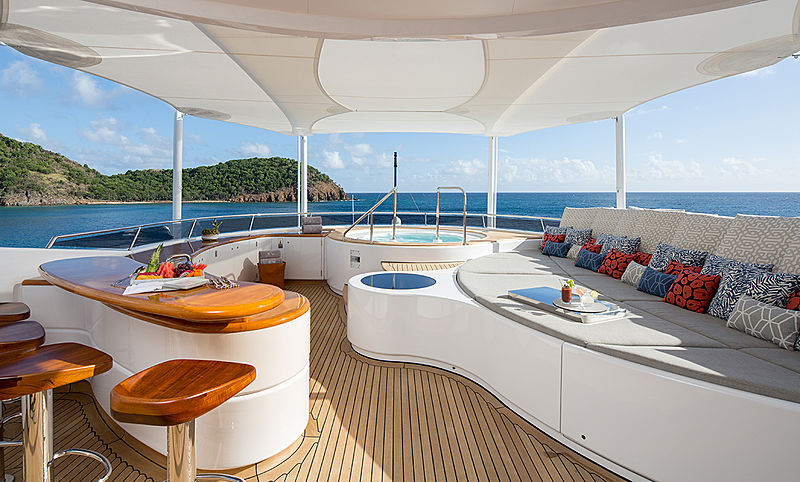 The gym area is forward on the bridge deck on the starboard side and also features a massage area option within the gym facilities, with the latest Technogym equipment including a Technogym Treadmill connect, kinesis, elliptical, and rowing machines and recently added TV/AV facilities. 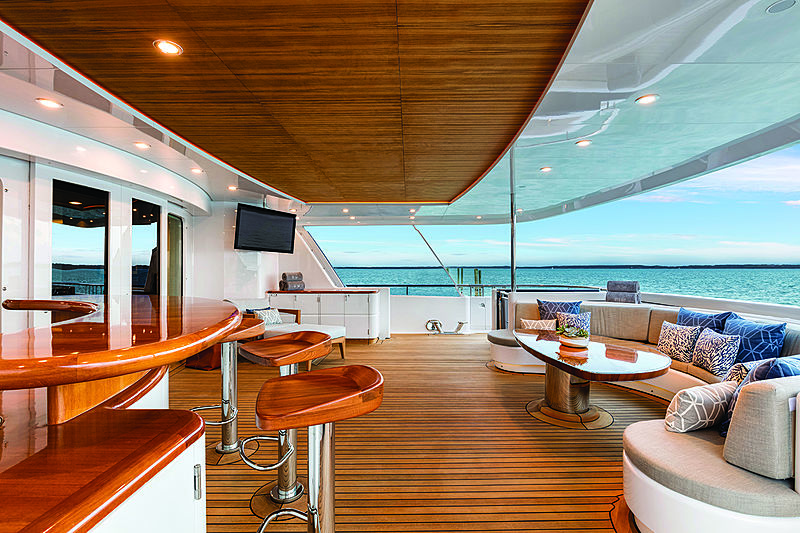 Finally, for any superyacht owner or charter guest, easy access to the water is vital, and this is easily achieved on board Broadwater. Using a wide spiral staircase from the main deck aft, you can reach the swim platform, where you can take advantage of the new set of tenders and toys provided during the 2017 refit works, or board a tender for the shore. Just off the swim platform, there is the ideal water sports staging area in the beach club arrangement offered in the lazarette: ideal for those adventurous guests keen to make the most of life on the water. 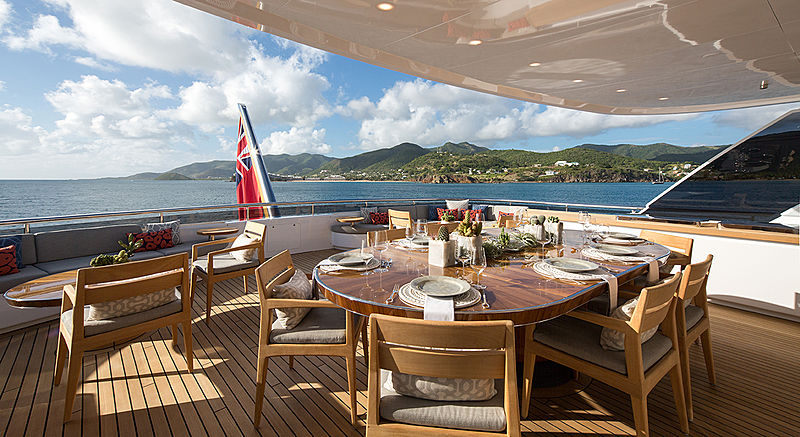 In terms of her performance, Broadwater can reach a maximum speed of 15 knots and cruises comfortably at 12 knots thanks to twin Caterpillar 1500 HP engines. As a final, and perhaps unexpected, advantage, although she benefits from the stability of zero speed stabilisers - allowing guests to cruise in comfort in all sea conditions - Broadwater’s 2.39-metre draft enables her easy anchorage in The Bahamas - unusual for a vessel of her size, thus opening up a whole new world of travel for her next owner. 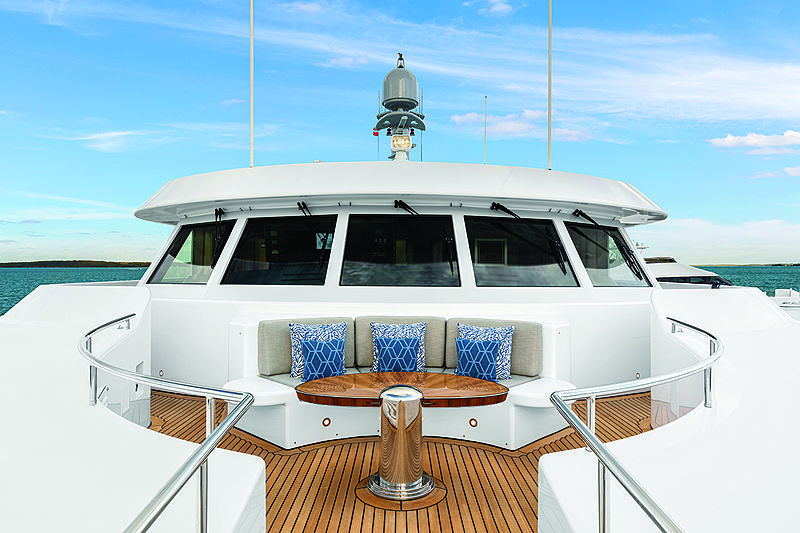 Broadwater is currently listed for both sale and charter with Worth Avenue Yachts and is listed at a reduced sale price of $24,900,000 at Palm Beach International Boat Show. Contact her broker, Michael Mahan on [email protected] for more information.