EYOS Expeditions has completed another highly successful season in the Antarctic this year. During the austral summer, EYOS provided expedition planning, leadership and management for several expeditions in the most challenging and rewarding destination a super-yacht can reach.

“I first went to Antarctica 17 years ago. Each year I’ve been back and it remains as inspiring and as enchanting as it was on my first trip South; there really is no place else like it on Earth,” says EYOS Expedition Leader Rob McCallum.

EYOS Expeditions led multiple charter clients onboard the 48-meter expedition yacht Hanse Explorer. “Every season we operate several charters onboard Hanse Explorer in both the Arctic and the Antarctic. She is a nimble ‘go-anywhere yacht’ that is just perfect for the adventurous expedition cruising we do. We can take her deep into the pack ice or to the edge of the Weddell Sea, where we sail close past the colossal tabular icebergs.”

In addition to voyages along the Antarctica Peninsula, EYOS led a more ambitious expedition on an 88 meter private superyacht to the Falklands, Antarctica and South Georgia for repeat clients. The company provided an Expedition Leader, an expert naturalist/historian, and an ice-pilot intimately familiar with these challenging waters.

“For those with time and a sense of adventure, we always recommend including South Georgia in the itinerary,” says McCallum. Widely regarded as the most amazing wildlife spectacle on Earth, activities can include a sunrise beach landing with 200,000 King Penguins or retracing part of Shackleton’s epic hike. 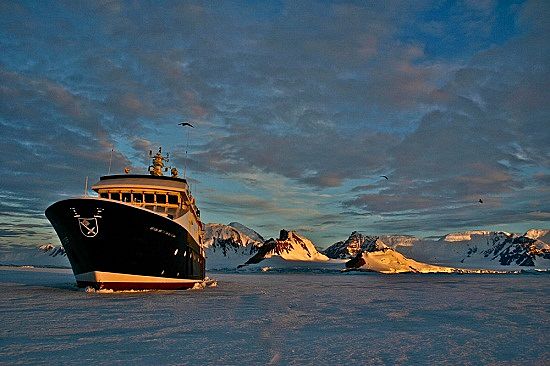 EYOS Partner Tim Soper reports more and more interest in Antarctica each year. “Clients are becoming more ambitious, as well; EYOS has been asked to arrange helicopter support, permitting for submersibles and private jets to the South Pole”.

“For those considering venturing down south on their own yacht or one they plan to charter, we decided put together a video that brings out some of the majesty and awe our guests experience. I know that no other destination in the world affects our clients the way Antarctica does, and hopefully this video shows why.