At SYT we follow superyachts around the world and sometimes we come across a photo of a superyacht which is unfamiliar to us and such was the case with motor yacht Whisper. Early last year I found a very small photo of the yacht and was unable to identify what she was called or where she was build, I only knew the photo was taken in Turkey. 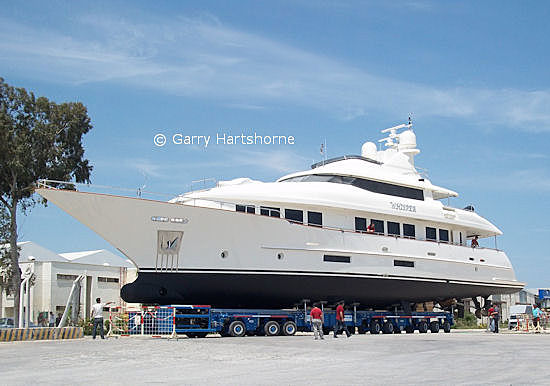 Until earlier this month when I came in touch with captain Garry Hartshorne, who completed a full refit programme on the yacht at the Cyrus Yachts shipyard in Antalya, Turkey. Superyacht Whisper started life around 2006 at the TSMM/Ned Ship shipyard in Turkey and in 2010 she was handed over to her owner, who decided to bring her to Cyrus Yachts for a complete makeover.

Upon his arrival at the project Garry and the team of Cyrus Yachts made a complete survey of the yacht and the changes which were needed. The complete engine room was revised with the re-instalment of the generators, fuel system and piping. Also the aft garage of the yacht was completely re-arranged with the addition of a new technical room for the new AC units and power packs in order to create an easy access to all equipment for future service works.

To improve the trimming of the yacht and to provide the owner and his guests with easy access to the water a new transom and swimming platform was added to the yacht. In addition to several other smaller changes to lay-out of the galley and crew mess was also completed changed.

Classed as RINA Private Yacht, motor yacht Whisper is designed to be wheelchair friendly and now based in Turkey where the owners enjoy cruising around.