With less than two weeks to go until the Extreme Sailing Series in Muscat, Oman, the Act 1 team line-ups have been confirmed, revealing a stellar cast of top professional sailors. Following the final event of 2011 in Singapore last December, the team managers and skippers have spent the last two months securing the best crews possible to help take them to overall victory in 2012. 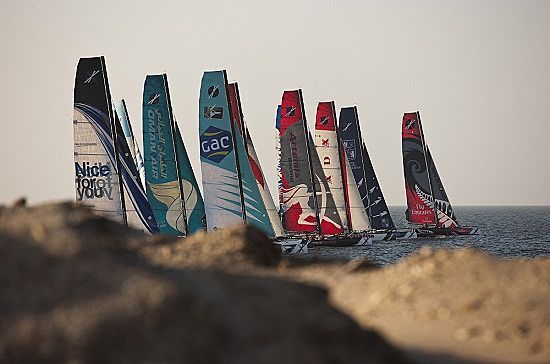 Once again, the team rosters include world-renowned sailors from a multitude of backgrounds representing 9 different nationalities. French sailing superstar Loick Peyron, Britain’s three-times ISAF World Match Racing Champion Ian Williams, Austria’s double-Olympic Gold medalist Roman Hagara return to the circuit, whilst American double-Olympic Gold medalist Charlie Ogletree and five-times America’s Cup sailor, Bernard Labro from France are two new faces gracing the roll-call. The teams boast an array of Olympic, America’s Cup, match racing and round the world credentials, as well as a sprinkling of ocean racing record setters. The two key cornerstones for success in this highly competitive circuit are experience and consistency and to this end 2011 runners-up Groupe Edmond de Rothschild from France and the Swiss team of Alinghi are keeping their crew changes to a minimum, whilst the two Oman Sail teams are sporting a near new line-up with only Leigh McMillan and Nasser Al Mashari retaining their places. And there are plenty of new team combinations for this season to spice up the competition!

A new team for the year is ZouLou who will have the current superstar of sailing, Loick Peyron at the helm for Acts 1–3 prior to team owner Erik Maris taking over. One of France’s most well-known sporting exports and a legendary multihull expert who recently shaved almost 3 days off the non-stop round the world Jules Verne record, Peyron will return to the Extreme Sailing Series. In 2010 he was the skipper and helm of 4th place Oman Sail Masirah . 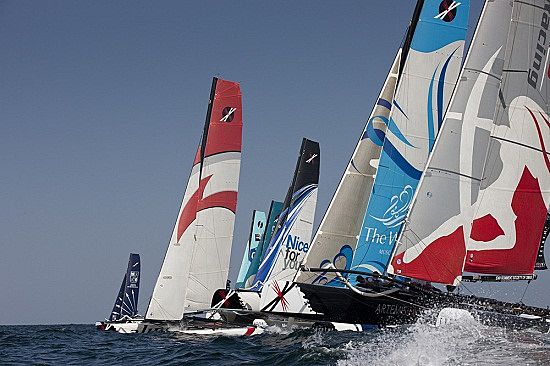 Peyron contrasts his recent experiences: “I can’t wait to go back to the Extreme Sailing Series with ZouLou crew, and especially to Muscat where I already spent a few weeks with the local team in 2009 and 2010. After two round the world tours in one year [Barcelona World Race and Jules Verne] I am really looking forward to going back to this intense racing amongst these top level crews.“

Groupe Edmond de Rothschild has retained their core team of Pierre Pennec on helm and Hervé Cunningham introducing two new faces on bow in the form of Bernard Labro and Jean-Christophe Mourniac who raced for another team in Singapore last December. The Swiss team Alinghi will be helmed by Ernesto Bertarelli supported by the regular Extreme 40 Alinghi crew including Tanguy Cariou, Nils Frei and Yves Detrey. Meanwhile, the renowned Austrian duo of Roman Hagara and Hans Peter Steinacher on the Red Bull Sailing Team have confirmed that Matthew Adams will be part of the regular racing crew and introduce ‘newbie’ Graeme Spence on bow who makes the step from shore team to race team. 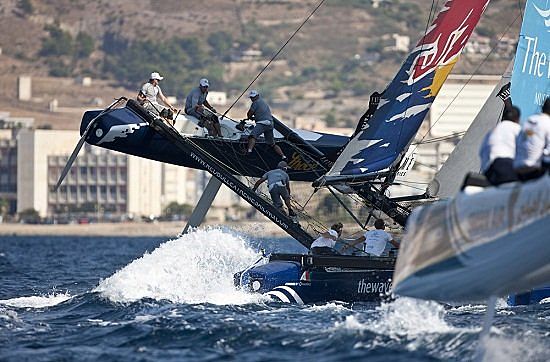 GAC Pindar skipper Ian Williams has gone the extra mile to secure a crew who can race with him for the season: “We have assembled a really strong team this year with a great mix of different skill sets. The only real opportunities to practice will be before the first event in Oman and before Act 5 in Cardiff so having a consistent team will be crucial to improving from event to event.” His crew includes Mark Ivey, Mark Bulkeley, Adam Piggot and Andrew Walsh – all have raced with GAC Pindar for at least one event in 2011 – and this combination will be integral in continuing their upward trend on the leaderboard.

The Oman Sail teams of The Wave, Muscat and Oman Air return this year with only Olympic Tornado sailor Leigh McMillan and Nasser Al Mashari retaining their roles from last year. McMillan who skippered The Wave, Muscat into fourth place overall in 2011, has handpicked a team that includes previous Extreme 40 sailors Ed Smyth from the USA, Pete Greenhalgh who with his brother Rob won the inaugural 2007 Extreme Sailing Series, and they will be joined by newcomer Omani sailor Hashim Al Rashdi who has come up through the Oman Sail programme.

Oman Air, will be led by record setting America’s Cup sailor Morgan Larson: “I’ve followed the Extreme Sailing Series since its conception and to now be competing on the tour with such a talented group of competitors is a dream come true.” The team that last year had 3 different skippers including Britain’s Olympic star Ben Ainslie, will benefit from the Extreme 40 experience of Olympic sailor Will Howden and Omani sailor Nasser Al Mashari who raced in 2011 with Oman Air on bow, whilst double Olympic gold medalist Charlie Ogletree brings a fresh skill set.

In a test aimed at keeping opportunities open for new talent, the teams will race Act 1 with five sailors rather than four, plus a VIP guest or media person when appropriate. This additional 5th sailor must be either female or under 23, or be classified as an amateur by ISAF. Both The Wave and Groupe Edmond de Rothschild will sail with female sailors as a result – Rachel Williamson and Adeline Chatelet respectively – the first girls to race since Olympic gold medalist Shirley Robertson skippered ‘iShares’ in 2009.