The Makkum yard of Koninklijke De Vries Scheepsbouw, which opened in 2005, has completed its first full custom Feadship. The 75.75-meter (248’6”) Ocean Victory was launched on 18 October 2008 in the presence of hundreds of invited guests and following a spectacular laser show. 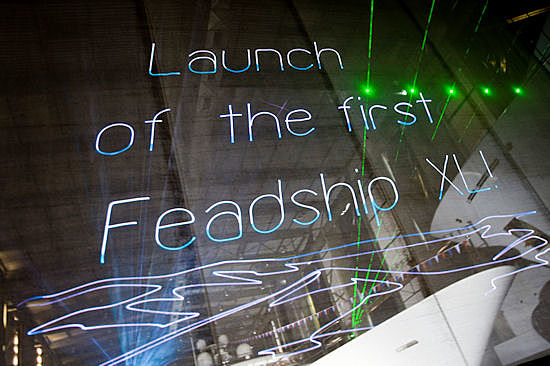 “De Vries Makkum is now certified as a fully fledged world leader in the Feadship school of luxury motoryacht construction,” stated the owner’s representative Alex Lees-Buckley who also passed on the owner’s enormous gratitude that the yard had completed the project in record time.

Built by Feadship’s dedicated hull-building facility in Papendrecht (NL), the steel hull of Ocean Victory was delivered to Makkum in July 2007. Two months later, the lowest layer of the aluminum superstructure was fitted and the De Vries Makkum craftsmen had just thirteen months to complete the project, which is among the largest Feadships ever built.

Entertainment is the name of the game onboard Ocean Victory, which includes a dedicated twelve-person cinema, dining facilities on the outside decks for 32 people, a full Crestron system in all luxury spaces (including the outside decks), and a health club with gymnasium, sauna, hamam/steam room, massage room, and a giant ‘beach’ platform. The contra flow swimming pool on the sundeck warms up from 20C/68F degrees to 38C/100F degrees in just half an hour. And the giant lazarette houses three tenders and three water scooters.

Designed by Alberto Pinto and Laura Sessa, the interior accommodates fourteen people in the highest degree of comfort and style. The owner’s stateroom incorporates a bedroom, two bathrooms, two dressing rooms and a separate office. There are three lounges onboard Ocean Victory and six guest suites.

The owners dedicated a great deal of time and effort to tailoring the functionality and aesthetics of the yacht to their personal tastes. Bespoke highlights include an LED lighting system on the outside decks that displays all the colors of the kaleidoscope, the beautiful high gloss teak and a teak windscreen on the sun deck.

“I have been astounded by the tireless enthusiasm of the yard personnel in De Vries Makkum and the rest of the Feadship group,” added Captain Paul Jackson at the launch. “Ocean Victory is a yacht of peerless quality.”

The yacht will leave the ‘cathedral’ in Makkum shortly, expect the first photos on SYT!