These days, nothing beats a “better than expected” consumer response at a boat show. That’s how the pros at The Sacks Group Yachting Professionals summed up business at the 24th Annual Palm Beach International Boat Show, which ran March 26-29 in West Palm Beach, Florida. TSGYP’s Brokerage and Charter Marketing Divisions both reported strong consumer interest, resulting in several pending yacht sales and bookings for the coming summer season.

Paraiso
Curtis Stokes of TSYGP’s Brokerage Division recently announced two exciting new megayacht listings, including the majestic 153-foot Feadship Paraiso. Designed by renowned naval architect Jon Bannenberg and built in 1983, this yacht underwent a complete refit in 2008. “Her styling is as fresh today as when she was built,” said Stokes. 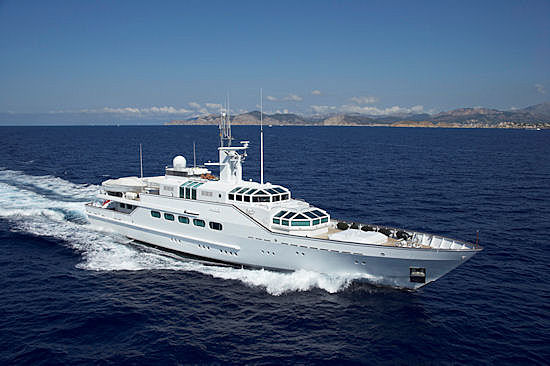 Paraiso has five luxuriously appointed en suite guest staterooms, including a main-deck owner’s suite and a VIP stateroom on the lower deck. Lloyds-classed, she has a range of 2,500 nautical miles at a cruising speed of 11 knots. “She tops out at an amazing 21.5 knots,” Stokes said. “It’s hard to believe she is offered for only 5.9 million euros.”

Balkan 28
Stokes’ other new listing is Balkan 28, a 28-meter (91'10') raised pilothouse motor yacht built in 1982 by Cantieri Di Pisa. She has an interesting history, having originally been owned by the then-Communist Republic of Bulgaria for its Chairman of the State Council. Her current owner recently moved her to Turkey for a complete overhaul from the keel up.

“Balkan 28 is nearing completion with a lengthened hull, all-new machinery, electronics, audio/visual, interior furnishings and more,” said Stokes. She is offered at $3.45 million. “The owner will consider all reasonable owner financing or leasing terms,” he reported.