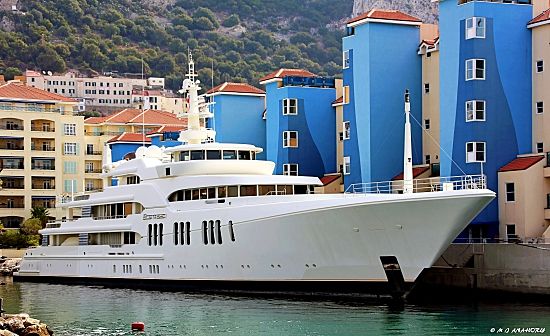 Launched at Feadship’s Royal van Lent facility in 2004, the 85.95m superyacht Ecstasea was built to a design by Terence Disdale. At the time of her launch Ecstasea represented a number of industry-firsts on a superyacht, and she is still regarded as one of the most iconic superyachts today. She is powered by four MTU engines, enabling her to reach a top speed of 30 knots which makes her one of the fastest superyachts in the Top 100 Largest Yachts. Her helicopter hangar located in the bow of the vessel pioneered the way how this space could be utilised on board a yacht. Two lateral sliding hatches open up to reveal a large storage basin. In 2009 the yacht was sold for the first time since her launch, and it is rumoured that the yacht change hands once again last year.

Ecstasea is captured here in the Queensway Quay Marina in Gibraltar earlier this month. She has since made her way to Germany where she is now moored outside the Nobiskrug shipyard in Rendsburg.