Ferretti Custom Line has launched their latest Custom Line 112’ Next, South China Sea Welin, a 34-metre vessel in the planing category and the twenty-eighth model in the 112 series. The private launching ceremony was held at the shipyard in Ancona with a traditional baptism during which a bottle of champagne was shattered on the keel. 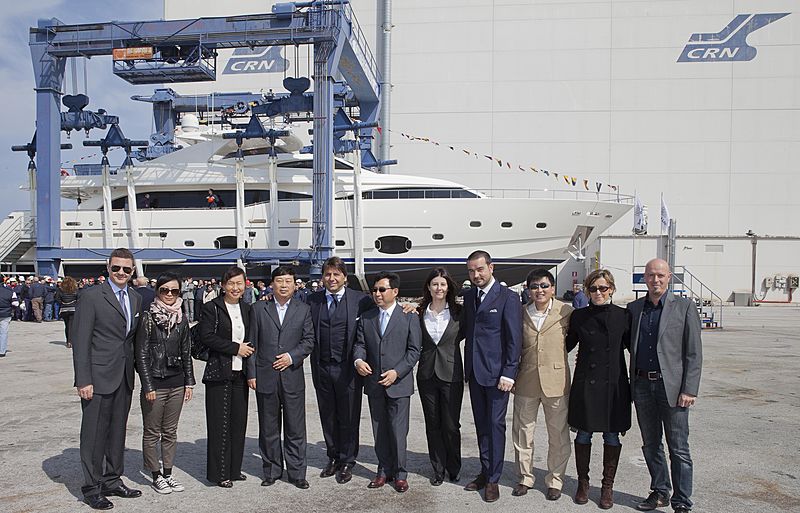 Present at the launching were the owners of the new 112’ Next: the Chinese real estate company Xanadu South China Sea. In fact, the 112’ Next will become one of the attractions at the avail of the guests of the luxurious real estate and tourist complex of Xanadu South China Sea, which is being built on the island of Hainan, and it will also be one of the biggest maxi yachts, manufactured in a European shipyard, to sail in Chinese waters.

The boat will have a leading role in guaranteeing added value to a structure that will be one of the most important resorts of the South of China, consisting of a 5-star hotel, many beautiful villas, a spa, a conference centre, a helicopter landing pad and a private yacht marina. The island of Hainan, with its lush unpolluted nature, is considered to be the best tourist destination for the new elite of the land of the rising sun.

Lamberto Tacoli, Chief Sales & Marketing Officer of the Ferretti Group, commented: “Today's launching of the Custom Line 112’ Next makes us particularly proud: landing in China, a strategic market of great opportunities, with such an important boat is indeed a very positive threshold for all of us”. He adds: “The delivery of this model adds on to our other models present in the Asian Pacific Area and particularly in China, where we will be present with important investments in the upcoming Boat Shows of Hainan, Shanghai and Quingdao”.

Karin Paggi, Brand Manager of the Ferretti Custom Line commented “With the Ferretti Custom Line 112’ Next, we have significantly improved the functionality of the internal areas without impairing the performance of the boat. This model remains faithful to the tradition of Custom Line, which has always placed the Ship owner's desires first, offering all the emotions linked to the experience of living at sea on a 'tailor-made' Custom version”.

Twin 2775 hp MTU engines provide the South China Sea Welkin yacht with a top speed of 26 knots. On board, comfort is guaranteed by 4 Mitsubishi ARG (Anti Rolling Gyro) stabilizers, fitted in the engine room, which reduces yacht rolling by up to 50%.