IMS Shipyard has released further details and a video of the progress of the extension of their facilities based in Toulon, France. The highly anticipated project is now in it’s final stages and will house up to one hundred 20 to 80 metre yachts simultaneously all year round upon completion. 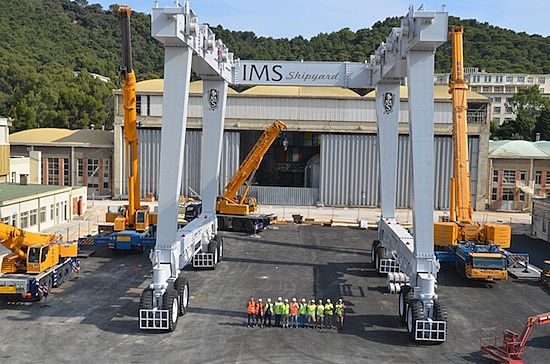 Amongst the work involved in the colossal project, 2,700 square metres of earth has been removed and reused, over 6,000 tonnes of asphalt has already been used, 2,000 tonnes of piles for supporting the constructions in the maritime zone (hauling dock, breakwater and yacht pontoon) have been installed, 4,500 square metres of paint has been applied and 80 members of staff in total have been working full time on the project.

During the summer, 80 forty metre tall piles were implanted at the bottom of the maritime area. The 670 tonne lifting equipment (Travelift) was delivered unassembled at the beginning of July, and the shipyard report that the assembly operation went smoothly. The impressive 19 metre high machine that represents an investment in excess of €2 million for IMS Shipyard is now operational on the IMS 700 site.

In September work began on the second phase of the 37,000 square metre central platform: civil engineering work above the implanted piles and transforming the buildings into workshops, offices, reception and recreational areas for crews.

IMS Shipyard is the largest yacht repair shipyard on the Mediterranean, with the current extension making it possible to increase the shipyard’s capacity five fold, as well as broadening the services they are able to offer. The project is on schedule to open its doors to the site in December next year.