Earlier this week, a celebration took place at the Muggiano shipyard in La Spezia, to celebrate of the twentieth anniversary of Destriero, the fastest yacht in the world which crossed the Atlantic in 1992, setting a record which still remains unbeaten. 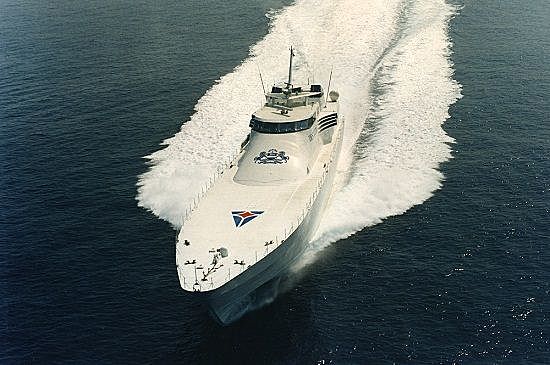 The monohull, built in 1991 in less than a year by Fincantieri, sailed 3,106 nautical miles without refueling, from Ambrose Light, New York to Bishop Rock lightship on the Scilly Isles, England, in 58 hours at an average speed of 53 knots (reaching peaks of 70), and won once more the Blue Riband which in 1933 had been awarded to the legendary transatlantic liner, the Rex.

Built at the shipyards of Muggiano and Riva Trigoso, Destriero was at that time the largest ship in light alloy ever to be constructed. At 67 metres with a beam of 13 metres and 60,000 hp of available power, the yacht could reach average speeds of over 60 knots. Destriero marked the beginning of the production of a new generation of high speed vessels with consequent benefits for commercial and occupational development at Fincantieri .

The challenge of the Destriero started with the aim to break the record for crossing the Atlantic. Her adventure was born out of the passion for naval technology of Ismaili Prince Karim Aga Khan, at that time President of the Costa Smeralda Yacht Club. He sponsored the initiative, supported by leading testimonials of Italian industry and culture of the time.

After the event Cesare Fiorio, head of the Destriero Challenge program and pilot during the crossing, said "The Destriero is so important because she left a mark universally recognized by fans and not; she is a milestone in the shipping history and thanks to her we got on to high-speed navigation".

Corrado Antonini, Chairman of Fincantieri, commented "Fincantieri is building in its US shipyards a brand-new line of Litoral Combat Ships, the US Navy backbone of the future. Thanks also to the Destriero experience we succeeded in entering the most challenging and prestigious market: the US Defence one".