As the three-year anniversary of the launch of Icon Yachts approaches in September, the first Icon 62 has undergone sea trails. SuperYachtTimes.com is pleased to bring you the first image of this Redman Whiteley Dixon (RDW) designed superyacht. 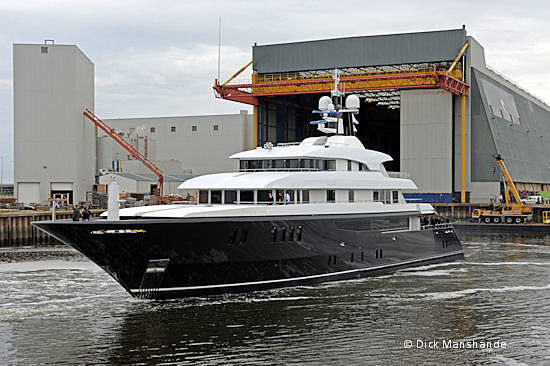 The newly finished yacht is the first of a series of three 62-metre boats the yard is building. The Dutch yard is also working on a larger platform, the Icon 95 and proposals are being worked up for even larger yachts, up to 145 metres long. Each Icon 62 is individually designed and customized, built upon an optimized platform, designed by Icon Yachts.

Redman Whiteley Dixon was selected to style the exterior by the owners of Icon as well as by the owners of hull number 2, project Midlandia. Tim Heywood has styled the exterior of the third yacht under construction, project Florida. Each yacht has a different interior designer, but 2 owners have opted for the master duplex suite.

Launched three years ago, a commercial facility in The Netherlands was acquired, with capacity to build or maintain numerous superyachts at once of up to 145 metres length. The aim is to build highly efficiently to the best Northern European standards, using pioneering techniques. CEO Wim Koersvelt has run a successful construction management company, acting on behalf of owners in the top yards worldwide, for many years and is known for his obsession with quality.

The much anticipated first Icon 62 will be on display at this year's Monaco Yacht Show in September, mooring N04 North Jetty. Stand number QS107.