Holland Jachtbouw has launched the J-class yacht Rainbow at its yard in the Netherlands. Based upon the lines of the original America’s Cup winner in 1934, this spectacular 40-metre J features the unique WhisperPower hybrid propulsion and power system. Rainbow is currently being stepped and sea trials will commence this month as she gears up to compete in this summer’s regattas, including the J-class races in England. 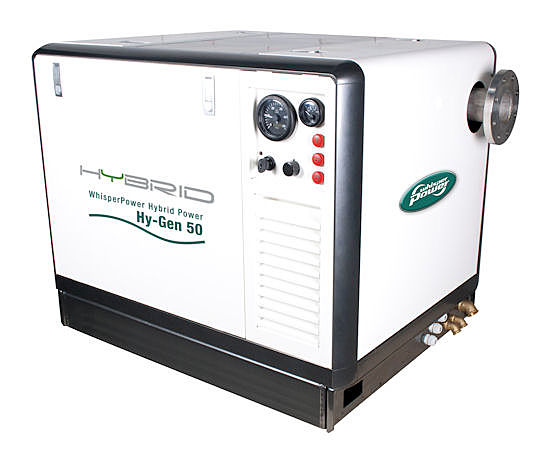 “I am proud to be the first superyacht builder launching a full hybrid propulsion and auxiliary power system, which is really engineered as total system and not a combination of components supplied by various companies. The cooperation with WhisperPower and its subcontractors really worked out well”, says Arjen Zijlmans.

This hybrid solution replaces the conventional main engine and two generator configuration found on other Js, which have a larger engine room than the comparatively lighter Rainbow (170 tonnes). The main engine replaces the second generator, while the remaining generator is a variable speed unit. The main engine generator can also act as an electric motor that can also run the propeller. This solution is smaller in size and saves on fuel. The batteries can also be charged while sailing without losing more than 1.5 knots of speed.

Rainbow can be operated entirely on her Hy-Store Li-ion batteries, including sailing, navigation and hotel load. This also meets the owner’s request for silent periods on-board, without generators running, from 11 pm to 7 am. And that in turn promises much for those who enjoy cruising and, potentially, chartering Rainbow.

Other key overall benefits of this innovative propulsion solution include a dramatic reduction of the ecological footprint, a 30% reduction in the fuel required to generate the hotel load, and a similar reduction in the maintenance costs for the power plant in hotel load. Redundancy is built-in with five power sources available: The hybrid battery, the variable speed generator, the variable speed engine generator, the shaft generator (when sailing) and shore power (when available). There is also a substantial reduction in audible noise levels both inside the yacht and out. 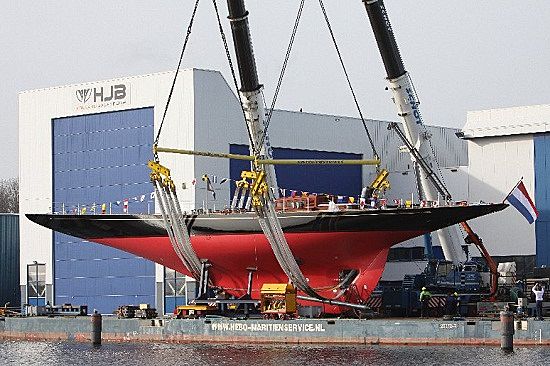 “The Hybrid system we jointly designed with HJB, is in compliance with the highest industrial standards and Lloyds approved”, says Martijn Favot, CTO of WhisperPower and leader of the Hybrid project. “Together with a team of high end specialist we worked 2 years to complete the components of the system. The Permanent Magnet alternators and other system components have been in-house designed and outsourced to leading Dutch and German co-makers”, according to Favot.

Main features of the WhisperPower Hybrid system:
• Electric propulsion during some hours (50 kW, > 5 knots)
• Sail management and other hydraulic functions like manoeuvring operate via inverter on the Hy - Store batteries (Lithium ION LiFePO4). Generator is switched off during sailing. Capacity: 2 x 40 kW/ 512 VDC nominal.
• The batteries are recharged during sailing (12 kW max), utilizing the 50 kW permanent magnet flywheel integrated electrical alternator/ electrical motor, which is connected to the shaft and CPP propeller.
• A new way of power generation is offered by the 50 kW GENVERTER, a variable speed ultra-compact and light weight diesel generator (cont. power 50 kW/ 1200-3600 rpm/ fly wheel integrated AC alternator, based on Steyr 4 Cyl engine). Being extremely quiet and fuel efficient, the GENVERTER switches off when the batteries are re-charged, the DC to AC inverter will take over the power supply automatically.
• Extended periods of silent AC power (3 x 400 VAC)/ 230 V/50 Hz) is offered by the DC to AC inverter, connected to the Li ION batteries.
• HY- Shore: the yacht's electrical system can be plugged into any shore power connection in the world, disregarding the frequency (50 / 60 Hz) as the system has a build-in frequency converter. Galvanic isolation is taken care of by the integrated