The rough conditions took their toll in the first leg of the 13th edition of Trophee Bailli de Suffren, with yachts Cin Cin and Noryema both retiring, and drama at the finish line for Irina VII. 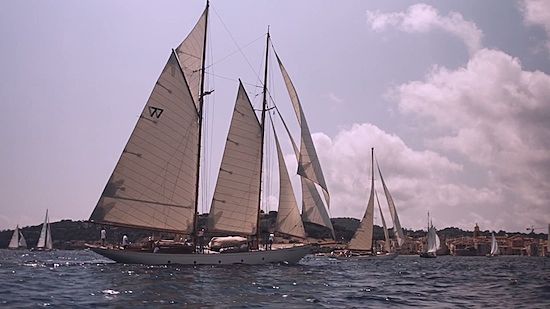 A close finish between Irina VII and Amadour was seen in the early hours of Monday morning. Irina VII finished fourth in the race, only five seconds behind Amadour after 39 hours of racing. While dropping her mainsail after finishing, the 1934 Fife cutter caught the mainsheet around her propeller and was driven ashore in the gale force mistral, gusting 50 knots at the time.

Irina VII made an exceptionally narrow escape, missing the rock and concrete breakwater by only a few metres, and went aground on the sandy beach. She was successfully towed off early in the morning with no significant damage.

Amadour and Hilaria finished a couple of hours later, and opted to remain outside the harbour until first light, when they were helped into their berths with the assistance of a couple of RIBs.

The 210 mile second leg to Trapani, Sicily, starts at midday today. Covering 600 miles from Saint-Tropez to Malta and visiting four ports in the Mediterranean, the Trophée Bailli du Suffren started on the 23rd June and will conclude on the 4th July.