Moonen Shipyards has reached a new plateau in its quarter-century of building fine “pocket-size superyachts.” The shipyard has begun construction of its longest and largest-displacement yacht, the first 37.80-metre Moonen 124. 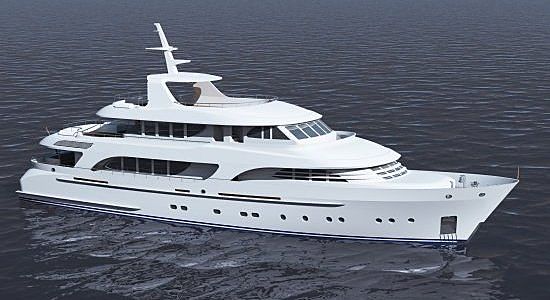 In August 2006 the shipyard contracted with a repeat client, who was attracted to René van der Velden’s shaping of the Moonen 120, which was at the time the largest design proposed for a newly developed “Displacement Series.” (The series now includes the Moonen 72, 84, 96, and 97.) As the client’s ideas evolved, van der Velden and Moonen had an opportunity to modify and modernize the exterior styling as appropriate to the larger hull. The naval architecture by Stolk Marimecs, the general arrangement, engineering, and outfitting were similarly modified to accommodate the greater size.

The 124 will be the first Moonen yacht with a central atrium with spiral staircase serving three interior decks and the flying bridge. Her general arrangement features a main-deck master suite forward that includes a “veranda.” Belowdecks, two double and two twin guest staterooms centre on the stairs, with crew quarters forward of a privacy-assuring bulkhead. As with many current Moonen yachts, the 124 will have an exciting, innovative interior by the team at Art-Line. It will feature what Art-Line calls “fusion” styling that combines Western cherry wood panelling ”spiced” by Eastern details including woven bamboo, leather, wooden floors, tropical shutters, and lots of loose lounging furniture. The wheelhouse plan is based on ergonomic efficiency.

The Moonen 124 steel hull is being custom-built by a Dutch specialist; the aluminium superstructure is being fabricated at Moonen. The yacht will be powered by twin MTU 16V 2000 M60 diesels. She is being built to class under Lloyd’s Register of Shipping survey and will be fully MCA compliant. Delivery is planned for spring 2009.

Besides the 124, Moonen is nearing completion of the first two semi-displacement “94 Alu” yachts in its “Fast Range Series.” A new Fast Range “99 Alu” is also on order. (All “Alu” yachts are being built in light, strong, corrosion-resistant Sealium.) Moonen also has on order its first two 97s, adaptations of the Moonen 96 with naval architecture by Diana Yacht Design.