Etoile d’Azur, the seventh in the highly successful Moonen 84 series, crossed the Atlantic Ocean last December, from Gibraltar to Sint Maarten, via the Azores (3.350 nm). Delivered to her owner in May 2007, she is the first Moonen 84 to do so since the series was initiated in 2002, proving that this “pocket-size superyacht” has the range and reliability worthy of the name. 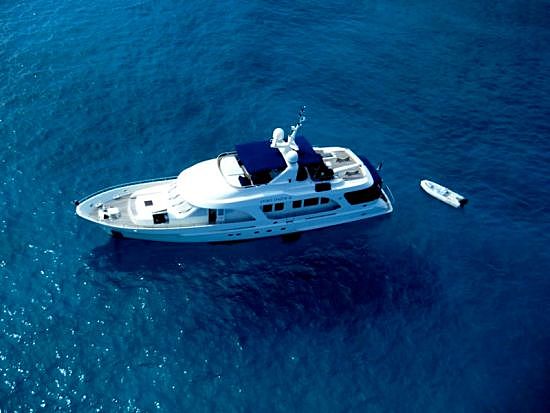 Etoile left her homeport Monaco end of October 2009, stopping in Palma, Mallorca (350 nm), for two weeks for some work, then laid over in Gibraltar (450 nm) for fuelling (taking on extra portable tanks to extend her capacity, which turned out not to be needed). On the first, 1.000-nautical-mile, leg to the Azores Etoile encountered heavy weather, including 12 hours with occasional seas breaking over her. Her captain, Guillaume Bourhis, reported that she behaved well despite the seas. On the leg to Sint Maarten she had smoother seas and cruised the 2.350 nautical miles in 10 days. Overall, Etoile’s performance and economy are impressive. On the first leg, with her engines purring at 1.320 rpm for 4 ½ days at an averages speed of 9,26 knots, she consumed 7.500 litres, or 7,5 litres/nautical mile (or 69,4 litres per hour).

After completing the passage captain Bourhis reported back to the shipyard: “Regarding the boat, she has very good sailing behavior. . . . I have done 17.000 nautical miles on Etoile d’Azur in less than two years and I would like to congratulate you for the qualities of yachting, comfort, and layout of the Moonen 84.” Guillaume Bourhis

According to Erwan Le Gall, the new captain: “I only have been cruising with Etoile d’Azur for some weeks, and I can only confirm that she behave beautifully at higher seas and is a pleasure to operate. After finishing the owners cruise plan through out the Carribean and Central America, we are looking forward to sail her via Bermuda the northern route back to Europe in 2011.”

Etoile d’Azur, like her sisters, has graceful styling, displacement yacht comfort, and the elegant four-cabin layout that has made the model so universally appealing. She is designed by René van der Velden with naval architecture by Stolk Marimecs. Etoile d’Azur is distinguished by an appropriately blue-toned interior including blue-lacquered furniture (suggested by her name) designed by the talented team at Art-Line Interiors.