Italian shipyard CRN has released the following photograph of their latest 55 metre superyacht project, the CRN 134. With just under a month to go until the launch of the vessel, CRN 134 was positioned on the slipway yesterday using engine-powered hydraulic lift trucks. 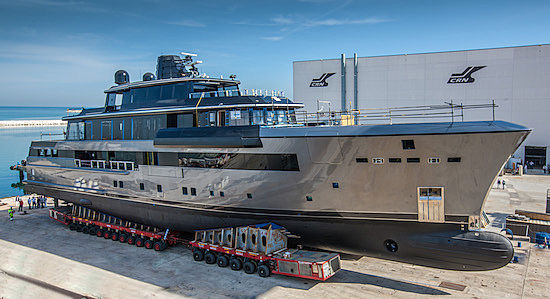 Built of steel and aluminium, she is fully customised and draws on some stylistic features similar to those found on military vessels. Her exterior was designed by the Nuvolari Lenard design studio, whilst her interior was undertaken by Gilles et Boissier architectural studio in collaboration with the CRN Interior & Design department.

The launching ceremony will be a private affair at the shipyard’s facilities in Ancona, Italy.