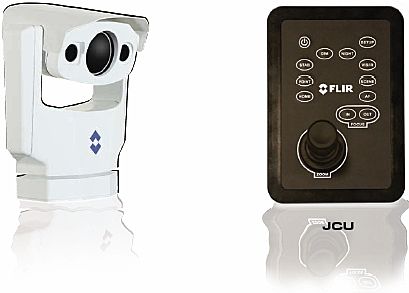 Voyager was especially developed for maritime applications. It is a powerful, gyro-stabilized multi-sensor, mid range, thermal night vision system. It features two thermal imaging cameras and one daylight / low light camera. The foveal technology mimics the human eye in that it offers high resolution at the centre of the scene. This is achieved using two 320 x 240 pixels uncooled thermal imagers, one with a narrow 5° field of view (140 mm) lens and the other with a wide-angle 20° field of view (35 mm) lens. This combination allows the captain to look at a large area without losing any of the detail. The Voyager accomplishes this with two independent thermal cameras and a unique patented image processing technique that provides both the foveal imaging mode as well as a continuous zoom between the wide and narrow fields of view.

The Voyager will allow you to detect objects, which are the size of a human being, more than 2 km away. Objects floating in the water, the size of 2.3 x 2.3 meter, can be detected up to practically 6 km away. The Voyager will detect these objects even in total darkness, through smoke, light fog and in the most diverse weather conditions.

Gyro-stabilized – for maritime applications
The Voyager is equipped with a precision gyro-stabilized Pan/Tilt mechanism, which increases the area of coverage. Thanks to this precision, fast, Pan/Tilt system, the Voyager allows for easy following of fast moving vessels or objects.

The main drawback of traditional long range, dual field-of-view cameras is that when the captain is monitoring an area in a wide field-of-view, this compromises long-range detection. Conversely, when searching in the narrow field-of-view there is tunnel effect that reduces situational awareness and target orientation. The Foveal concept provides the solution as it overlays long range and wide-angle detail and presents it as a single image.

Voyager: for harsh maritime environments
The Voyager is an extremely rugged system. Its vital core is well protected, IPX6 rated, against humidity and water. The Voyager can be cleaned with a hose just like any other equipment. The corrosion resistant housing protects drive motors and ensures long life. The Voyager operates between -32°C and +55°C.

The Voyager has a built-in heater to defrost its protective window. This ensures a clear lens and good quality thermal images displayed on your monitor, even in extremely cold environments.

Numerous maritime applications
The Voyager is extremely suited for night-time navigation but has numerous other maritime applications. It’s ideal for seeing channel markers, shipping lane traffic, land outcrops, bridge pilings, debris, exposed rocks, other vessels and indeed any other hazardous floating object. Also in broad daylight, the Voyager can detect objects that remain invisible for the naked eye. It is not affected by glare from the sun. The Voyager will allow you to see through the glare, and detect possible obstacles, when navigating during sunrise or sunset. It can be used for “man overboard searches” where it is important to find the person before hypothermia sets-in. Other applications include short to medium range threat detection.

Unlike other night vision systems that require low amounts of light to generate an image, the Voyager requires no supplementary lighting to operate all year round on a 24/7 basis. Furthermore, the Voyager is equipped with a low lux daylight camera that can provide complementary low-light color visibility for additional target identification when conditions permit.

Thanks to volume production FLIR Systems has been able to commercialize thermal imaging technology effectively making it affordable to a much greater range of potential maritime users. The Voyager is a good example of this trend, offering significant operational benefits at an attractive price.

About thermal imaging
Thermal imaging is the use of a thermal imaging camera to “see” thermal energy emitted from an object. Thermal, or infrared energy, is light that is not visible to the human eye because its wavelength is too long to be detected. It’s the part of the electromagnetic spectrum that we perceive as heat.

Thermal imaging cameras produce images of invisible infrared or “heat” radiation. Based on temperature differences between objects, thermal imaging produces a clear image. In contrast with other technologies, such as light amplification, thermal imaging needs no light whatsoever to produce an image on which the smallest of details can be seen. Thermal imaging provides full visibility irrespective of the prevailing light level and weather conditions. It can see in total darkness, in the darkest of nights, through fog, in the far distance, through smoke and is able to detect anyone hiding in the shadows. It is used for security and surveillance, maritime, automotive, firefighting and many other applications.