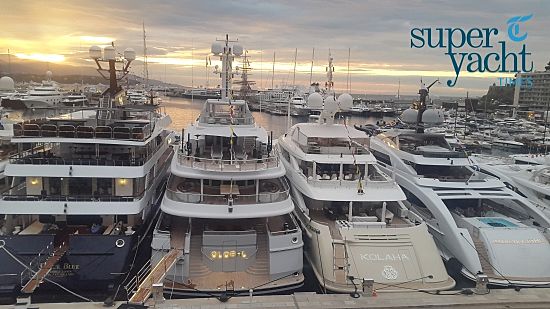 Taken at the end of May during the Formula 1 races held in Monaco, here are four impressive superyachts lined up next to one another; Force Blue (ex; Big Roi), Global (ex; Kismet), Kolaha and Galactica Star.

The 63.22 metre Force Blue was built by the Danish Royal Denship member Assens Shipyard in 2002, and was refitted in 2005. She accommodates up to 12 guests over six spacious staterooms, as well as a crew of 17. Living up to her Expedition yacht title, she boasts an impressive range of 8,000 nm, and is powered by twin Caterpillar 3512B DITA engines of 1,850 hp each.

Global measures 68 metres in length and was completed by Germany by Lürssen Yachts in 2007, and returned to the yard for an extensive refit which was completed at the beginning of summer last year. The refit included enhancements to her helicopter deck, which is now significantly larger and safer for regular helicopter operations, as well as a repaint of her hull in a light grey colour.

Completed in 2010 by the Italian yard ISA Yachts, Kolaha measures 63 metres, and boasts naval architecture and exterior design by Andrea Vallicelli. She has been designed with a focus on enjoying her outside areas to the fullest, with a large pool and sunbathing area on the sundeck, as well as a large beach club area. Powered by twin Caterpillar 3512C engines, she has a top speed of 16.5 knots and a cruising speed of 14.5 knots.

Lastly is the 65 metre all aluminium Galactica Star, completed by the Dutch shipyard Heesen Yachts in 2013. She features a revolutionary Fast Displacement Hull Shape, with a sophisticated hydrodynamic design, allowing her to reduce her environmental impact by up to 30 percent whilst maintaining high performance levels and top speeds of 28.8 knots.